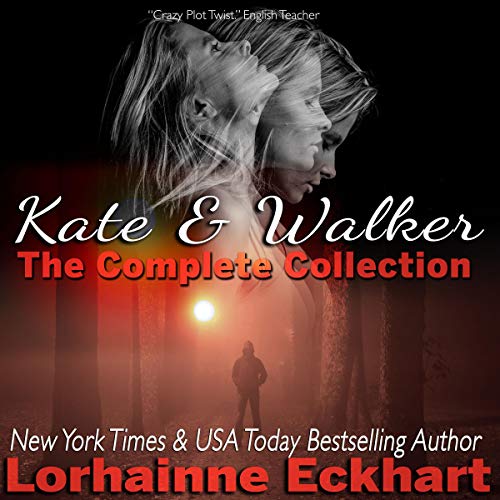 Kate and Walker: The Complete Collection

Kate and Walker: The Complete Collection

Are you ready for Kate and Walker? A high-stakes suspense and sizzling, red-hot romance. This is two weeks of craziness you won’t want to miss. Grab all three books in one collection.

One Night: A blind date goes deadly on a night she’ll never forget!

Kate Sikes has it all: she’s smart and sexy, she has a great career, and she really does believe in happy endings - only she always picks the wrong guys. Nonetheless, she’s determined to meet the man of her dreams, and she believes she’s finally found the one when she turns to online dating. However, her high hopes are once again dashed when Mr. Right turns out to be Mr. Wrong, with some seriously heavy baggage that has Kate running for her life.

When Detective Walker Pruett comes to Kate’s rescue not once but twice, he realizes the only way to keep her safe from a crazy stalker is to keep her close. But his life is far from easy. He’s a lone wolf, and the last thing he’s looking for is attachment. After One Night with Kate, though, Walker can’t fight the chemistry sizzling between them. Not only does he find her irresistible, he feels compelled to protect her. And Kate soon discovers just how far Walker will go to do so.

Edge of Night: Kate Sikes has finally met who she believes is Mr. Right, only Detective Walker Pruett isn’t all about flowers and living happily ever after. In fact, after the greatest night of sex Kate’s ever had, she hasn’t seen Walker once.

However, she refuses to pine away for him or call him even though he invades her thoughts and her dreams - that is, until he shows up to investigate a case of robbery at the hotel where she works. Once again, Kate is left to fight Walker’s charms, though she knows he can’t commit and she’s convinced he’ll eventually break her heart.

Last Night: The adventure continues for Kate and Walker in Last Night as Walker proposes marriage to Kate realizing he can’t live without her. Only an intruder from Walker’s past puts his relationship with Kate in jeopardy.

I want more of Kate and Walker. This is a Must Listen to Audible book.

Overall I really liked this book this book, the audio performance was great and provided sufficient build up when necessary. I do not own any other copies of this work so I am unable to speak to any deviations from the print copy.

Kate, an assistant front desk manager at a hotel, meets Walker, a Portland detective, at a fine dining restaurant. As the series progresses events throw them together, indecision tears them apart, and the surprises keep coming at them. One Night is a fast paced romantic suspense read that chronicles a single night’s thrilling events. Edge of Night picks up one month later with a new mystery to solve revolving around the hotel where Kate works. Last Night picks up sometime after Edge of Night and draws the series to a close.

I received a free audio copy of the book from the author. I had the opportunity to review or not.

Romance, a bit of suspense and continuous banter among Kate and Walker who are both used to being in control are surely a good entertainment. Kate is an actual magnet for danger and problems. Walker a playboy who can't resist taking care of her to the point of changing his behaviour.

I enjoyed this series.

The Kate and Walker series is a bit of a departure from Lorhainne Eckhart's beloved Friessen family saga. That's not a bad thing but just a note to let prospective readers know not to expect it to be similar. The language is a bit stronger in this series (lots of F bombs) - not something I mind but I mention it because I know some readers do.

At the beginning I wasn't crazy about Glenda Johnson's narration but either I got used to her style/voice or she improved a lot by book 2 or maybe a bit of both. 😊 She doesn't really attempt to do a male sounding voice for Walker but she does change her tone and the pacing a bit when he is speaking. I had no problems following the story while I was performing various household tasks.

This series is fast paced and kept me interested until the end. Kate and Walker's relationship is a bit contentious at times (I love the verbal jousting they do) but it reminds me of how my husband and I are with each other so it made me smile.

Overall this was an engaging series and I enjoyed it very much.

A complimentary copy of this audiobook was provided to me but my review was voluntary and not influenced by the author.