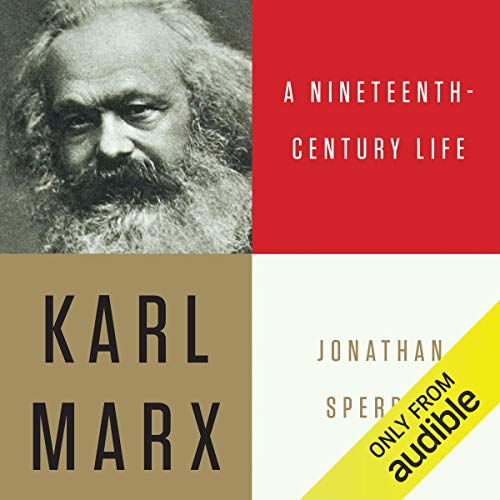 Karl Marx is a magisterial and defining biography that vividly explores not only the man himself but also the revolutionary times in which he lived. Between his birth in 1818 and his death 65 years later, Karl Marx became one of Western civilization's most influential political philosophers. Two centuries on, he is still revered as a prophet of the modern world, yet he is also blamed for the darkest atrocities of modern times. But no matter in what light he is cast, the short, but broad-shouldered, bearded Marx remains - as a human being - distorted on a Procrustean bed of political "isms", perceived through the partially distorting lens of his chief disciple, Friedrich Engels, or understood as a figure of 20th-century totalitarian Marxist regimes.

Returning Marx to the Victorian confines of the 19th century, Jonathan Sperber, one of the United States' leading European historians, challenges many of our misconceptions of this political firebrand turned London journalist. In this deeply humanizing portrait, Marx no longer is the Olympian soothsayer, divining the dialectical imperatives of human history, but a scholar-activist whose revolutionary Weltanschauung was closer to Robespierre's than to those of 20th-century Marxists.

With unlimited access to the MEGA (the Marx-Engels Gesamtausgabe, the total edition of Marx's and Engels' writings), only recently available, Sperber juxtaposes the private man, the public agitator, and the philosopher-economist. With Napoleon III, Bismarck, Adam Smith, and Charles Darwin, among others, as supporting players, Karl Marx becomes not just a biography of a man but a vibrant portrait of an infinitely complex time. Already hailed by Publishers Weekly as "a major work... likely to be the standard biography of Marx for many years," Karl Marx promises to become the defining portrait of a towering historical figure.

If you could sum up Karl Marx: A Nineteenth-Century Life in three words, what would they be?

Marx -- bourgeois and revolutionary, brawler and family man, workaholic who couldn't finish anything, thinker lodged in Hegelian philosophy who kept revising his ideas in response to each decade's new intellectual trends.

It's annoying when reviewers point out mispronunciations, but this reader's were especially prolific and egregious. "Émigré" is supposed to be stressed on the first syllable, not the second. The same goes for "Hegel." Both these words are repeated innumerable times. "Bon mots" does not rhyme with "Don Knotts." And so on.

I found some long sections, devoted to Marx's nasty struggles with various rival socialist leaders, a bit tedious in audiobook format. The third and final part of the book, which steps back from the fray to assess Marx's work in broader contexts, is the most engagingly written.

Every German word is miss-pronounced

Kevin has no command of the German language and manages to miss-pronounce every German word (and there are quite a few of them) to point where the word becomes unrecognizable to a native German speaker.

Miss-pronunciations are the typos of audio books.

Would prefer the narrator of a European historical text to be able to properly pronounce words from German and French.

A generally good introduction to Marx's life and work, but the writer does sometimes explain Marxist ideas using Marx's own (translated) vocabulary. Especially in an audio book I want explanations of such ideas in non-specialist language.

But the main problem here is the reader. His voice is good -- but his pronunciation is gratingly idiosyncratic. Émigrés become eh-MEE-greys. A countess is a kown-TESS. Benjamin Disraeli becomes diz-ray-EE-lee. Hegel becomes heh-GEL. Manque becomes MANK. A cache of weapons becomes a cachet of weapons. And my favorite: a tu quoque argument becomes a too coke argument.

Karl Marx has to be a difficult person to treat objectively, as neither hero nor villain. But Jonathan Sperber manages to do that in my opinion. And he does it by deliberately situating Marx in the nineteenth century, hence the subtitle. The book is professional, scholarly, and moderately challenging. Rather than viewing Marx through the lens of twentieth century communism Sperber focuses on his nineteenth century cultural and intellectual contexts. Instead of Marx in proximity to Lenin, Stalin, and Mao we get Marx in proximity to Hegel, Feuerbach, Bauer, Bakunin, Ricardo, etc. To me this seems much more illuminating to Marx's biography. While it's totally appropriate to adapt Marx's ideas to later developments it's a different project from understanding what Marx meant to say when he said it, which may be distinct in many cases from later Marxist interpretations. The Marx that emerges is neither a brilliant prophet nor a failing fool. Sperber's Marx is a thoroughly nineteenth century figure who was intimately involved in and contributed to the major issues alive in Europe at that time, something I find fascinating as a student of European history. Rather than Marx through the lens of twentieth century communism we get the nineteenth century through the lens of Marx, which makes for an interesting study.

The narration was quite good. Some mispronunciations on the German but I didn't find it all that distracting. And other than that it was very engaging.

I expected more on the historical developments Marx lived through. Instead, this book focuses on Marx's philosophical and personal history - emphasis on the former.

Truly by far one of the best book on Marx

This book is worth a listen for anyone interested in learning more about Marx and his ideas.

not bad, not great

I'd is an informative but dry biography. I'd say it is about as average as you can get. The author is very fair to a controversial figure and does a good job bringing in historical context.

Biography at its best. Nuanced, insightful and interesting. Very, very good narration. One to listen to many times.

This biography of Karl Marx tries to situate the philosophy’s works and his political initiatives in the context of 19th century Europe. In doing that, the book gives more attention to the facts that shape Marx’s ideas than to the content and effects of his works. The exposition is clear and fluid. The description of Marx’s family life allows the reader to understand the difficulties he endured and how someway he succeeded in doing his work. Marx was a revolutionary that never capitulated with the ruling Elite, specially in Prussia and Russia. His efforts and reflections are a treasure to mankind.

Sperber's biography is highly informative and well-researched. He's especially strong on Marx's relations to various movements in 19th century German intellectual life. I would disagree with certain points of his interpretation of Marx's economics (Scott Meikle is a better reader), but he is good on showing how Engels's positivism has distorted many interpretations of Marx. But if Sperber's book is commendable, Kevin Stillwell's narration of it for audible is not. Stillwell has some talents as a reader— he has good pacing, and enunciates those words which he knows how to pronounce clearly. But the problem is that he doesn't know how most words are proncounced! Almost every other word is pronounced wrong. Especially the German words, but also many French and English ones.

Well, to be honest, as non-native speaker I didn't get some parts of the book, in particular Hegels philosophy and its implication to Marx. But I really liked the detailled description of the surrounding in the 19th century, so finally it shows a perfectly clear picutre of Marx and the pillars of life at that time.
But you need some time to dig into the lecture...

This book is an accessible account of Marx's life, including discussion of his major works and some key issues and controversies. The discussion is not aimed at a specialist audience, it provides enough background for a general reader with an interest in 19th-century philosophy and political history to follow Marx's development.

Unfortunately, the reader of this book is painfully slow. I say that as someone who does not necessarily need a fast-paced reader. I normally listen to audiobooks at 1.0x or 1.25x speed. This one I listened to at 2.0x speed, because I was driving, and I was afraid that the slow reading would put me to sleep. In addition, the speaker mispronounces some words that are pretty important to the subject matter of the book, like "emigre" and even "Hegel"! Hearing "Hegel" pronounced about 100 times with the emphasis on the second syllable drove me crazy. The reader also clearly has little or no knowledge of German. A few German terms (like "Wissenschaft") are pronounced correctly, but others are nearly unrecognizable.

Given that the audiobook is over 20 hours long, I can't quite imagine listening to it at one sitting, even at 2.0x speed.

This is a biography, not an overview of Marx's works. While there is significant discussion of the works, the focus is on his life, not on major issues of interpretation. If you're primarily interested in the philosophical issues in Marx's work, other works might provide a better overview.