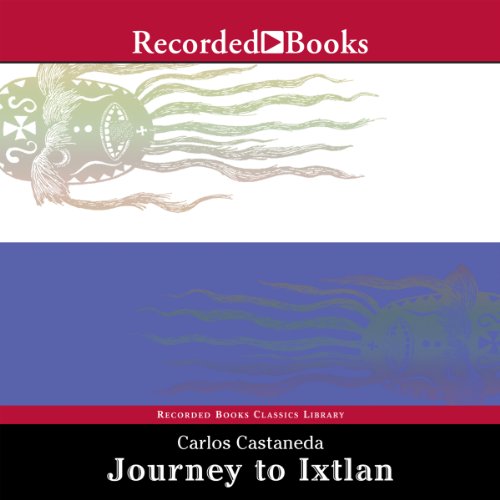 Carlos Castanada was a student of anthropology when he met Don Juan Matus, a Yaqui shaman and the inspiration for Castanada’s The Teachings of Don Juan. In this controversial work, Castanada relays his experiences being challenged by his mentor on his perception of the world and all living things in it.

Fantastic Book full of wisdom with lots of humor, more of the carlos books need to be put on audiobook. The way of looking at ourselves and our death and the reality of how serious it should be, but how in reality we believe things about ourselves that are false images,this book makes me listen !

So well done! How about doing Tales of Power?

This classic Castaneda story, the first which doesn't feature psychedelic drugs, holds up well in time. I first read it 40 years ago. Immediately, after listening to Journey to Ixtlan, I tried to find the audiobook version of Tales Of Power, the book that follows this one, but it apparently does not exist in audio format. I would beg Luis Moreno to do this sequel, as the new generation of audiobook listeners shouldn't be tantalized with Journey To Ixtlan, salivating for more, only to find the series abruptly terminated.

What other book might you compare Journey to Ixtlan to and why?

Autobiography of a Yogi is the closest that comes to mind. Truly, there is little out there that compares to Castaneda's writing. He's in a class by himself.

The "hiding" of Carlos's car was a lot of fun.

I love the concept of a "Worthy Opponent," and Carlos's experiences with his.

What does Luis Moreno bring to the story that you wouldn’t experience if you just read the book?

What made the experience of listening to Journey to Ixtlan the most enjoyable?

I read this book quite a while ago; in my teens actually. Currently I have this book in written form. Thinking it might be convenient to listen to the book this time I purchased it from Audible. I feel it my duty to warn others that the narrator is one of the worst I have ever heard. He puts the wrong emphasis on the wrong syllables. His reading is slow and staccato. He almost calls out words rather than reading them. He seems to have no concept of how to read in a flowing manner. He expresses strong emotion in places it is not called for etc. etc. To sum up the narration is so bad that it is very hard get understand the book.

Don Genaro.
His teaching style is so different to that of Don Juan. He plays a much more important role in this book.

The perceptions of reality without the use of psychotropic plants. (the lost car in particular)
Close second is the details of the feud with Catalina.

Yes. Don Genaro's story at the end made me cry. The insight he gives into the life of a 'Man of Knowledge' was something Don Juan never touched on.

You must listen to the first 2 books before this one

I couldn't ask for a better reading and performance of this book. Luis Moreno does an incredible job and I really wish they would hire him to do the rest of Carlos Castaneda's astounding books.

Philosophy In The Desert

What did you love best about Journey to Ixtlan?

One of the best in the Don Juan/Carlos Castaneda series, in my opinion. Castaneda reviews the non-hallucinogenic plant events during his meetings with Don Juan in various Mexican locations. Don Juan lays out many advanced philosophical concepts and techniques relating to paths followed by seekers of enlightenment. Prepare to have your world views destroyed and expanded.

I enjoyed the reader's characterizations of Carlos and Don Juan. Carlos as an inquisitive student and Don Juan as a commanding mentor. His style is entertaining, without over doing anything. I truly hope that he will produce an audiobook of the fourth Castaneda book in the series, "Tales of Power."

Journey to Ixtan an awakening.

I would have to reccomend this book on the premis that it exposes the illusion of our reality.

The most compelling aspect I would have to say is the adventures Don Juan takes our hero on.

The narrator was adequate enough to get the story told.

Narration was somehow annoying. Could never put my finger on why. Still worth it for what it teaches and postulates.

Enjoy for the story or as a textbook on life!

What made the experience of listening to Journey to Ixtlan the most enjoyable?

This is my third Audible Castaneda book and I am hoping for more soon. I think following his journey in succession is key to understanding his experience. It seems that each book becomes more "mature" in its content.

What was one of the most memorable moments of Journey to Ixtlan?

I laughed out loud a great number of times when picturing Don Juan and Don Hernado responding to Carlos' inane questions, only to realize I would have asked the exact same question ... funny because it's true.

What does Luis Moreno bring to the story that you wouldn’t experience if you just read the book?

Honestly I think Mr. Moreno's accent brings an air of authenticity to the story.

The last five minutes of the book summed up so much of what life is all about, I was moved to tears.

Don't get hung up on whether or not this is entirely factual. That is not important, suspend you disbelief and learn through the excellent story telling. Then decide for yourself. I struggled with some of Castaneda's experiences, but I prefer to take his word for it and understand that there is more out there that I have NOT experienced than what I have!

The car is not here either

Very wise teachings and very well narrated. The world is a mystery indeed. Once you see, you can't go back. But you can laugh and sing and dance. Or look for your car with your friend... under a boulder.

I rate this with five stars and recommend it wholeheartedly.

Listening to this book brought some order in my thoughts and many insights for the future. Very good narration either.

Just don't like fully the voice of Don Juan. Otherwise overall good made. Was easy to understand even for not native English speaker