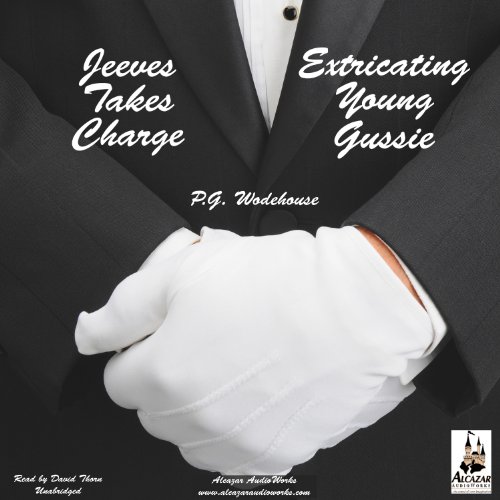 The ubiquitous butler, Jeeves, comes to the rescue of his new master, Bertie Wooster, from a fate worse than death, so they say. And in the second tale, poor Bertie is summarily dispatched to New York, by an overbearing aunt, to extract his cousin from an amorous affair with a vaudeville artiste! How absolutely dreadful! Jeeves’ managing of affairs offers such wonderful amusing stories that make us laugh and enjoy his ingenuity to the fullest.

Best known for his Jeeves series, Wodehouse created the most resourceful and competent servant in literature, the word "Jeeves" itself has become part of the vernacular. Wodehouse also had great success as a musical theater lyricist, making contributions to "Show Boat" and "Anything Goes".

Born in England to a noble family, Wodehouse's writings reflected his background, a truly humourous perspective on the upper class. During a stay in Manhattan, Wodehouse met his wife and settled in New York, with a brief adventure in Hollywood to write screenplays. Living into his nineties, Wodehouse enjoyed the fruits of his labor and acclaim worldwide, a happy, funny man.

An excellent performance by David Thorn on this classic comic text. With all the shenanigans of the upper class wrought to a delicious parody.