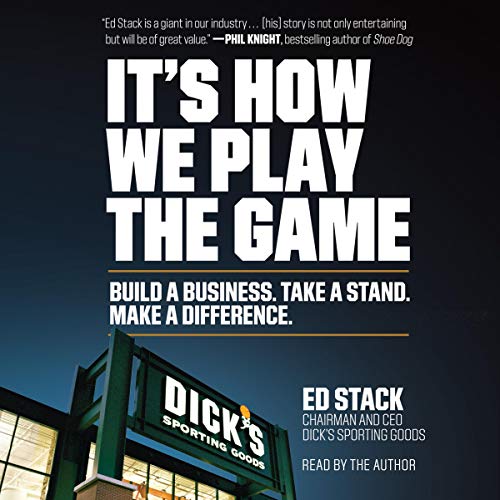 It's How We Play the Game

It's How We Play the Game

Porchlight’s Best Leadership and Strategy Book of the Year

An inspiring memoir from the CEO of DICK’s Sporting Goods that is “not only entertaining but will be of great value to any entrepreneur” (Phil Knight, New York Times best-selling author of Shoe Dog), this audiobook shows how a trailblazing business was created by giving back to the community and by taking principled, and sometimes controversial, stands - including against the type of weapons that are too often used in mass shootings and other tragedies.

It’s How We Play the Game tells the story of a complicated founder and an ambitious son - one who transformed a business by making it about more than business, conceiving it as a force for good in the communities it serves. In 1948, Ed Stack’s father started Dick’s Bait and Tackle in Binghamton, New York. Ed Stack bought the business from his father in 1984, and grew it into the largest sporting-goods retailer in the country, with 800 locations and close to nine billion dollars in sales. The transformation Ed wrought wasn’t easy: Economic headwinds nearly toppled the chain twice. But DICK’s support for embattled youth sports programs earned the stores surprising loyalty, and the company won even more attention when, in the wake of yet another school shooting - at Marjory Stoneman Douglas High School in Parkland, Florida - it chose to become the first major retailer to pull all semi-automatic weapons from its shelves, raise the age of gun purchase to 21, and, most strikingly, destroy the assault-style-type rifles then in its inventory.

With vital lessons for anyone running a business and eye-opening reflections about what a company owes the people it serves, It’s How We Play the Game is “a compelling narrative.... In a genre that can frequently be staid, Mr. Stack’s corporate biography is deeply personal.... [Features] surprising openness [and] interesting and humorous anecdotes” (Pittsburgh Post-Gazette).

Great story read by the Author

Truly enjoyable and interesting story. Tons of great business lessons. CEO obviously had a tough time being reared by his dad but maybe helped to give him backbone.

A Street Fight for principles

Every life is a story of obstacles and achievements, but the tale that Ed Stack tells of his life and the company that he and his amazing team built from humble beginnings is heart warming, instructive and inspirational. And the story goes on.

Great read for anyone with a passion for sports and businesses that have a moral foundation.

It was good, got a little to political @ the end but I liked the book overall.

Very interesting life story! Only in America can this happen! A chance for anyone to live the American Dream!

Working for a company that is driven by so much passion is an amazing experience. To hear the story from the person living it is a surreal experience.

When Dick’s first came to our area, I wasn’t a huge fan. I could often find the same products online or at a local competitor. My daughters, however, enjoyed buying their soccer and basketball apparel at Dick’s. But now, after reading How We Play The Game, I’m a huge fan of Dick’s. After reading the book, I wanted to apply for a job at Dick’s (I’ve been a lawyer for almost 30 years and really don’t need another job). I also wanted to contribute to the causes that Dick’s supports, especially helping disadvantaged youth with their sports fees. My girlfriend and I did that locally last year to help 10-12 local kids go to summer sports camps, but I now want to “give ‘til it hurts”. This book had me laughing, crying, and thinking. But, most importantly, it’s inspired me to give, to help, to teach, and to do the right thing, even if unpopular. Thank you, Ed Stack, for writing this book!

I really wanted to listen to this book, but the author is a terrible narrator, after listening for 10 minutes I want to throw my phone out the window. I will return this audiobook and buy the print version instead. (Too bad, because I usually like listening to books that are read by the author.)