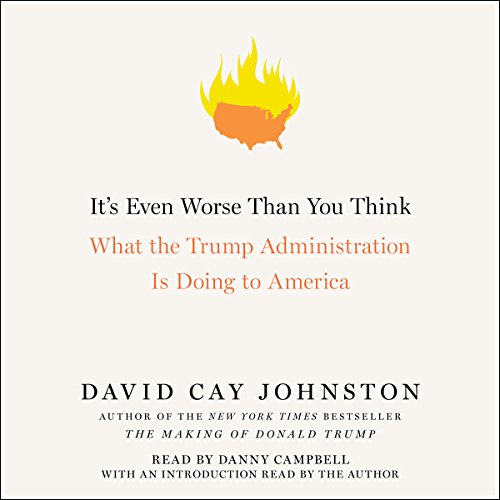 It's Even Worse Than You Think

"One of America's most important journalists" (The Washington Monthly), winner of the Pulitzer Prize, and author of the New York Times best seller The Making of Donald Trump, David Cay Johnston examines the Trump administration's policies in its first 100 days, showing how its actions affect our jobs, finances, safety, and much more.

No working journalist knows Donald Trump better than David Cay Johnston, who first met the 45th president in 1988 and has tracked him ever since. Johnston chronicled much of Trump's conduct in two books: Temples of Chance and the best-selling The Making of Donald Trump. He was also an uncredited source of documents and insight for major campaign reports by The Washington Post, The New York Times, Bloomberg, and network television. When Trump announced his campaign in June 2015, Johnston was the first national journalist to write about a potential Trump presidency.

Now Johnston examines the first 100 days of Donald Trump's presidency, including a close look at what the mainstream press stopped covering years ago: the workings of the federal government agencies and how that touches the lives of all Americans, from our wallets to our health care to our safety. He also provides unique insight about how our lives are affected by many actions that the new administration quietly approves without drawing the attention of the Washington press corps.

Featuring Johnston's renowned skill in bringing government policy to life, this crucial book clearly explains how our daily lives will be affected by the actions of the Trump Administration. This book is essential listening for all Americans.

An important look at America under Trump

David Cay Johnston is a working journalist who has covered Donald Trump for decades, and has written two previous books about him. In this book, he looks not at Trump's personal life and all the possible, ah, colorful details, which at this writing are much in the news, but strictly at his actions as President, and his business dealings that explain and illuminate those actions.

This is very much a fact-based book, examining what Trump has actually done, and the practical effects, as well as the direct contrast between Trump's specific and oft-repeated campaign promises to help, for instance, students struggling under student loans or workers who aren't finding jobs because companies have moved those jobs overseas, or to help small businesses, and what his policies really are. Trump has appointed Betsy DeVos to head the Dept. of Education. She has no real education experience, but is deeply involved in for-profit education companies. Under Trump and DeVos, President Obama's progress toward protecting students from predatory loan practices by for-profit schools are being reversed, not improved. This is just one easily summarized example. To fully understand this example and others, Johnston's careful detailing of the actions, their background, and their effects are necessary.

He lays out Trump's many conflicts of interest, and the extent to which Trump's approach to the Presidency is truly different not just from our most respected Presidents, but even from the ones we've considered incompetent or corrupt. We see how tangled, contradictory, and profoundly unhelpful his immigration actions and policies are to the American workers he has promised he will help with those immigration policies are. Again, another example, one better understood with Johnston's detail and context than in a short review.

This is an important book. It is fact-based, not ideology-driven. You will learn by reading or listening to it.

I bought this audiobook.

Trump is a Shit

Every American should read or listen to this book. It clearly explained the shit show that is the Trump presidency. The GOP has been chipping away at the core American principals for 30 years now. Trump is their final nail in the coffin. This book should light a fire under Americans liberal or conservative

Boy, we are in trouble!

The title is very accurate. Mr. Johnston's meticulous reporting paints a clear picture of the multi-dimensional horror that is the Trump presidency.

An Erudite Analysis of the Trump Fiasco

It's Even Worse Than You Think, What the Trump Administration Is Doing to America, written by David Cay Johnston, and narrated by Danny Campbell. David Cay Johnson is an investigative journalist, a specialist in economics and tax issues, and winner of the 2001 Pulitzer Prize for Beat Reporting. He previously wrote a book warning of the narcissistic person of Donald Trump was a debase person; “The Making of Donald Trump.” That book tells of Trump’s history as a callow hooligan. It spent much print time on reporting Trump’s interactions with mobsters in the northeast. According to Johnson members of the Cosa Nostra. Notwithstanding Johnson’s reporting, and because we did not listen when there was time to listen, thug Trump is now lawbreaker President Trump. Johnson finds that Trump has evolved since those days. His present-day heavies are not Italian but rather Russian mafia. According to Mr. Johnson, this evolution has taken us, from a threat to our judicial structures, to a takedown of our overall American ways or if you rather, our being a source of hope for the innocent of this world.

This book should only be read by those looking for more than a story. This is a listing of Trump administration policies, and a point by point, explanation of its fallacies, and an examination of why each falsity is does us as a society wrong. For example, when talking about taxes, Mr. Johnson, explains the administration policy in their own words and then explains the concepts of taxation and codes sections to show the administration’s ignorance. The same with international trade and a dozen other topics. Magnificently designed but worth the read? Only if you want substantive arguments. If you are a little slow in the mind this book may be too much for you.

There is something very strange here. Even though we are talking of evil in this book, it seems, according to Mr. Johnson, few speak challenge to the narcissistic Trump. It is difficult to speak truth to power. Thus, by violating our laws, and institutional norms, the President is protecting himself and his wrongful ways. There are those who can speak, and have a constitutional duty to do so, such as the Speaker of the House Paul Ryan or the Senate Majority Leader, Mitch McConnell. Their positions should protect them from protecting our constitutional norms. They choose to be obsequious to the wrongs of the President, notwithstanding their duty to our union. Why? Achievement of their policies are more important than protection of our democracy. This reading, or at least the subject matter of the ignorance of our President and his administration to the truth, to scientific proof, to legal structures and custom, let’s us realize the present executive and his administration are an abhorrence. This reminds me of a James Comey statement: “makes me mildly nauseous.”

The book seems to report our Constitution has a flaw. Our forefathers never promoted political parties. Yet, they came into being. Thus, the unanticipated vehicle, political parties, provide a system to obey tyranny so long as one’s political theories are being deployed. It is a weakness that may destroy our democracy.

I personally think the reader’s cadence, that was Danny Campbell’s reading, was awful. Yet the content allows one to bear that burden.

Learned more from this book than I thought I would too. Trump must be stopped.

It's Even Worse Than You Think is a well researched book by an author, who knows Trump as well as anyone I'm aware of. He's an impeccable journalist, who has been covering Trump since the 1980's in several highly respected publications.

He brings home the fact that this is an incredibly sad day in American history and questions just what the long range damage will be from this grossly incompetant, vengeful and deceitful man and the like-minded individuals he's surrounded himself with.

As Johnston is a tax expert, he discusses what the implications of the monetary and tax decisions that are being made.

Learning more accurate information about the unfortunate situation this administration has created is extremely unsettling, to say the least, but recommended reading for anyone who aspires to be any more than just a victim.

I have to say the information in this book is terrifying. Very well written it’s a real gift for anyone who reads this. The narrator was excellent and full of feeling.

The straight dope NO sugarcoating.

I have respect for Mr. Johnston. And he writes well. But to say what you find out in this book is disheartening to the point of near nausea is not overstating it. I do not doubt anything here in. But if at the end of the journey you seek reassurance and who would not It is not really offered. Instead Mr. Johnston reminds us it is the nations job not his to decide what the future holds. And the reader was just awful. He sounded like he was stricken with an upper respiratory infection.

Great analysis of the sad state of affairs

This reasonably up to date review of how we as a Country ended up with Trump in the White House is both clear and detailed. The author speaks from 30+ years of experience in covering Trump, and as anyone who has, the author writes from a point of view that is highly critical (with ample justification, JMHO).

A minor and person peeve is I don't really like the sound of this reader's voice, but content over form wins the day.

This is a great book for people who know little. If you follow current events not much here