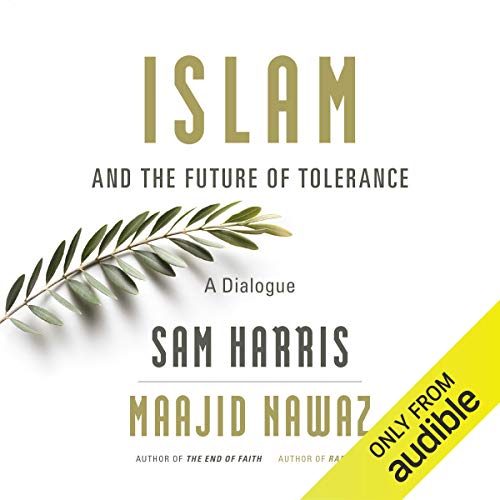 Islam and the Future of Tolerance

In this short book, Sam Harris and Maajid Nawaz invite you to join an urgently needed conversation: Is Islam a religion of peace or war? Is it amenable to reform? Why do so many Muslims seem drawn to extremism? What do words like Islamism, jihadism, and fundamentalism mean in today's world?

Remarkable for the breadth and depth of its analysis, this dialogue between a famous atheist and a former radical is all the more startling for its decorum. Harris and Nawaz have produced something genuinely new: they engage one of the most polarizing issues of our time - fearlessly and fully - and actually make progress.

Islam and the Future of Tolerance has been published with the explicit goal of inspiring a wider public discussion by way of example. In a world riven by misunderstanding and violence, Harris and Nawaz demonstrate how two people with very different views can find common ground.

Not a recording of the original conversation

Maybe I'm an idiot for assuming it was, but maybe you're an idiot like me. It's literally a reading of the book by the two authors, just like any audiobook. I'm not even sure both of them were in the same room at the same time. The result sounds completely unnatural, as the book itself actually is a transcript of an actual conversation. This makes it quite funny, but I don't think I could listen to the whole thing.

For an actual recorded conversation, "The Four Horsemen" is worth a listen.

Must read for an honest debate on the topics

As the late Christopher Hitchens expertly said about arguments between two matched "opponents", it is very seldom that the position of both will remain exactly the same, changes and concessions will occur and the debate will advance. Even if only a little at a time.

In this book you can see Sam and Maajid views growing better and more refined about the topics of Islam, islamism, secularism, the muslim society, radicalization and tolerance.

I'd already read all of Sam's books, so Maajid was the greatest surprise for me and greatly enriched my views about radicalization (and the different levels it can happen) and islamic culture in general (specially the many possible interpretations of the Quran, the Hadith and other texts).

I'll be sure to read his book "Radical: My Journey out of Islamist Extremism" as soon as possible.

This book is a must read for everyone who wants to honestly discuss the topics abovementioned and I highly recommend it.

(I'm sorry if there are any typos or mistakes, I'm brazilian and english is my second language)

Listen in on an actually productive conversation

What did you love best about Islam and the Future of Tolerance?

The authors discuss provocative issues without derailing the conversation, as is often the case when discussing religion.

The book clarifies the issue of Islamism to "liberals" of all stripes - liberal in this context being proponents of free expression, freedom from religion, advancement of equal rights, etc. - frankly, the values that allow for pluralistic societies.

After all, we should be able to criticize ideas which limit our liberal values, right? They do it.

A liberal Muslim and liberal atheist discuss controversial topics and make headway. They base this discussion on their common ground as liberals. In the supplemental Q&A, they have clearly formed a friendship through the process. Listening in on their conversation is very helpful in having conversations of our own.

What about Sam Harris and Maajid Nawaz ’s performance did you like?

Maajid educated me regarding the nuances of Islamists vs. Muslims, and in interpreting the texts. Sam, as always, honestly asks pointed questions with the aim of understanding. This conversation is pragmatic about finding common ground forward, therefore they avoid discussing the validity of the religion or their personal views on the truth of it. This was an honest conversation, and I trusted it.

If you could give Islam and the Future of Tolerance a new subtitle, what would it be?

Both authors speak beautifully, leaving space for many thoughts about their probing ideas. Voice performance matters in an audiobook, and the even, calm of the authors' voices eased my way into challenging material. Since my background knowledge of Islam is limited, I had to really think about each concept presented. I am inspired to listen again to the book, and read the materials mentioned in the verbal bibliography.

Distinguishing between Islam and Islamism

Narration: great performances of both the authors. They are used to this kind of thing and speak of subjects they care and know a lot about, which shines through. It sounds more like a letter correspondence than a live podcast, which results in a few, not so smooth transitions between the two. But it is no way a problem and also insures they don't speak over each other.


A great dialog between two people I've been following prior to this book. It is very instructive in setting a standard for these kind of debates between religious and non religious people.
Makes some very important distinctions between the kind of Muslims in the world, and in separating the idea of Islamism as an ideology, from the religion of Islam and the majority of Muslims.

It is not a philosophical debate about the nature of God in Islam and the plausibility of such a God's existence.

A conversation we need

I recommend this book because it is an intellectually honest conversation that presents carefully considered issues in Islam from two very different perspectives which, in my opinion, is the reason this book succeeds. It is also important that this book paves the way for other people to engage in similar honest discussions because we cannot stick our heads in the sand and ignore issues.

The authors represent themselves. I think Maajid Nawaz had a more central role in this discussion and made a compelling case as to how one can maneuver carefully and try to reform Islam in a way that will lead to secularism and human rights. On the other hand, Sam Harris was skeptical and made excellent points as to why some core issues of the faith may never be subject to a solution.

Which character – as performed by Sam Harris and Maajid Nawaz – was your favorite?

Sam Harris was very effective in showcasing the problem in western societies like the USA where a large group of politically correct groups of people are trying to control criticism of various ideas including Islam because it may offend or they think religion has nothing to do with the problems in Muslim majority countries. This is also a vital message of the book in my opinion.

Not really, but that was not the point. The problem demands that we cast aside emotions and arm ourselves with a rational and critical approach.

There's a lot of food for thought in this interesting dialogue about one of the most pressing matters of our age. Arguments between the authors are laid out in clarity, directness, and civilized manner - a true delight. They're looking at reality with open eyes, sense of urgency, and concerns yet offering actions which could help the liberal civilization to remain on course.

Idealistic almost to a Fault

Both Mr. Harris and Mr. Nawab are tremendous spokespersons for their particular world views. Their ideas are rational and reveal a power and resourcefulness that are at times are both disturbing and provocative. When I listened to them what I heard was a deep familiarity with the Koran and the Hadith from Mr. Nawaz and an all business pragmatism from Mr. Harris. What this is is a conversation between an ex-jihadist and an unapologetic and proud atheist. That's interesting enough to listen to. But, the chances of what Mr. Nawaz proposes are slim to none. Look, I'm an idealist too! But, a billion and a third Muslims who would need to take it on themselves to literally change the way scripture is interpreted. They would have to reform. Intractable. Sorry.

This is an amazingly enlightened honest conversation, between two individuals that focus on real root issues instead of grandstanding

This is the kind of book where I wish to listen to over and over again just to ingrain everything said in it into my mind. As a muslim struggling with other muslims, this book was the thing that set my mind free from a lot of weights that I felt on my shoulder. It tackled topics that have been eating my mind for so long in a way that pushed these thoughts towards progress for the first time in recent Islam history. I have to thank both sam and maajid for these results. Maajid for giving muslims the exact mentality that we should take for tolerance, and Sam for asking exactly the right questions that needed to be asked to push the conversation forward. This ability of Sam to know exactly what to ask and to take every topic to its logical end astonishes me every time I listen to him.

This should be the book that starts the new standard of discussing Islam. no beating around the bushes. Islam either can or cannot exist with modern society, and we need to push the conversation to find out.

other than that, the performance of both was amazing. It started with them sounding like they were reading from a book rather than talking, but slowly turned into a natural conversation. The additional conversation at the end after the book was published was also very humanizing.

An Atheist "Must read... listen"

I wish I was able to speak with such clarity and accuracy. I hope this is a step towards peace.
I am an Atheist.

This is a super educational and progressive book.

This is a super educational and progressive book. Only by talking about these issues can we bring the debate forward.

Great, if a little wooden

A great conversation, especially the second part, where becomes more natural. The reading of a transcript through the first roughly two thirds of the book can be somewhat wooden.

a book that everyone in Europe should read

the authors provide important insights into one of the most pressing questions of our time: how can islam fit into Western societies, what are the challenges and dangers on the way and can we be optimistic, that it will all work out in the end.