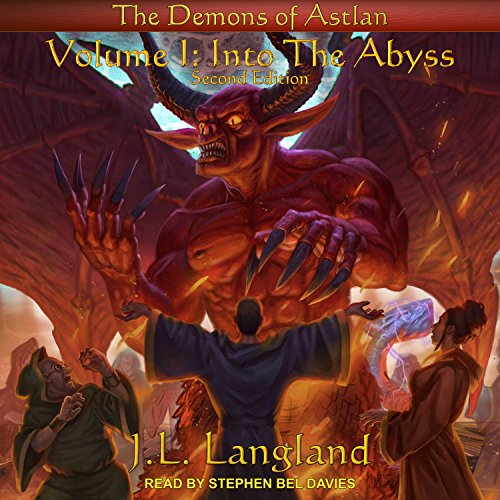 It turns out, the "Demon Weed" actually is a gateway drug! Who knew? Tom Perkinje certainly didn't. He had never smoked anything in his life, but as the new kid in town trying to make friends, he foolishly let his new buddy Reggie talk him into trying a joint that he'd picked up from a new dealer.

Before he knew it, Tom was having a seriously bad trip; a total out-of-body experience where the world had dissolved around him. The next thing Tom knew, there were these deranged myopic wizards from some place called Astlan calling on him in some sort of pig Latin mumbo jumbo. They had somehow mistaken Tom for a demon!

He tried to flee, but the wizards were relentless and were determined to conjure him into their world and bind him as their demon slave for all of eternity. And these crazy wizards? Turns out, they were going to war and planned to use their new demon slave as a secret weapon to obliterate the enemy!

I actually read the first few chapters on my kindle using the sample and didn't care for it, I didn't dislike it but it seemed a little too YA for me but it's is about 16 year old teen so that's to be understood . But I saw it on Audible and listened to the sample and thought I'd spend a credit on it ( understand that I had about 6 credits banked and was really desperate to listen to anything ) I am now however 4/5th of the way through and haven't been able to stop listening to it since I got home from work which was about 3 hours ago and that's how it's been the last three days. If you like this genre then I recommend this audiobook. I've really enjoyed listening to it, I'm 11 hours in and don't want it to end.

Not what you think, a Diamond in the Rough

I read this book when it came out a few years ago. It surprised me since at the time it was one of the many, many kindle books coming out, but it was extra long and I had kindle unlimited and tried it. I liked it very much. The author did a very nice job of world building both in story and with short interludes that explained the more estoric sections of the universe that come of as school studies on the subject. All the characters come off as very real and develop pretty well over time.

I also really liked the person that they got to read the audio book. He really has some talent and doing different voices for the character and tones and even some accents. This is the kind of talent you need to make a story come more alive.

So the basic story is a16 year old kid on Earth goes to a party, gets high on a new drug and then while he's having an out of body experience gets bound by some wizards in a different universe and turned into a demon and sent to the Abyss(basically hell) to spend the rest of eternity as an enslaved demon. The wizards do this because they see all free floating souls on the astral plane as unbound demons and since their preconceived notions of what a demon looks like makes them take very inhuman appearances and after mellenia of abuse and slavery most demons are vengeful crazies they never believe the demons are anything other than evil spirits even if they were told the truth.

So this is a delightful adventure of a good young man trying to find his place and some justice in a new universe and trying to understand this new world. It gets even better in books 2 and 3 which I hope get the same audio treatment soon.

the author does a great job in developing the main characters and their relationships. Looking forward to book two.

I didn't want it to end!

Bought this book on a whim since I've caught up with all the books I've been following after reading some of the reviews. It's another "normal person trap in a fantasy world" book which is easily becoming my favorite kind of fantasy books and I wish mainstream literature would be more open to it. This is probably one of the best out there. Definitely worth a try.

Better than the herd

While not great literature this book is definitely a cut above the average 'hero trapped in game inspired" alternate reality.

First the pros: Many interesting characters with individual motivations. They are rather sketchy but you can tell them apart. There is character growth.

Plot is interesting and not stuck in well worn grooves. Everybody gets to play. There are interesting twists and turns as our hero learns what he can do with his new powers. (Yes, he is too good to be true but it is fun.) There is blood and mayhem, but not unrelenting.

Voice actor does a serviceable job with one exception. Please, it is so easy to check pronunciation. Never read the word 'ennui' again without learning how to pronounce it. Hint: it is French. (I know because I just made the same mistake a week ago. Had to look it up.)

Cons: The author needs an editor with a big red pencil to cut out excess verbiage. Author can be relied on to use 15 words when 2 will do. Lots of exposition that could be trimmed or revealed in the story rather than lectured to.

Same regarding the rather heavy-handed moralizing.

All together this a book that entertains in spite of its flaws.

surprisingly entertaining I enjoyed it and will get the sequel.the story is different from the norm but in a really engaging and interesting way. it's worth a read but a little slow to start

At first glance I thought this was a LitRPG novel and given its length, almost overlooked it. I'm so glad I didn't though and was treated to an immensely enjoyable fantasy novel that is different enough from the vast majority of the books available for the genre.

The world building and character building is excellent and there is a smooth flow to the story even though it is told from many different characters' perspectives.

If you're a fan of light fantasy, I highly recommend this book. This is well worth the credit spent.

Now I can't wait for the next next installment to be available on audible. I just might have to settle for reading it.

Good, but not great.

A good story, with compelling characters, but it suffered from the author's tendency to have exposition dump chapters. I'm glad that he had everything worked out, but a chapter on the cosmology of the Abyss works better in an appendix, as opposed to breaking up the narrative flow. That said, I am going to buy the sequel.