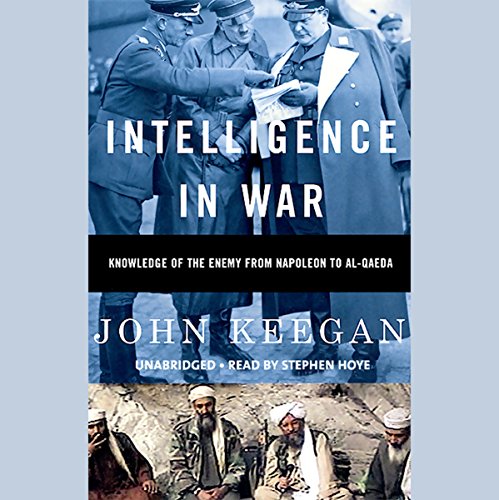 In fiction, the spy is a glamorous figure whose secrets make or break peace, but, historically, has intelligence really been a vital step to military victories? In this breakthrough study, the preeminent war historian John Keegan goes to the heart of a series of important conflicts to develop a powerful argument about military intelligence.

In his characteristically wry and perceptive prose, Keegan offers us nothing short of a new history of war through the prism of intelligence. He brings to life the split-second decisions that went into waging war before the benefit of aerial surveillance and electronic communications. The English admiral Horatio Nelson was hot on the heels of Napoleon’s fleet in the Mediterranean and never knew it, while Stonewall Jackson was able to compensate for the Confederacy’s disadvantage in firearms and manpower with detailed maps of the Appalachians.

In the past century, espionage and decryption have changed the face of battle: the Japanese surprise attack at the Battle of the Midway was thwarted by an early warning. Timely information, however, is only the beginning of the surprising and disturbing aspects of decisions that are made in war, where brute force is often more critical.

Intelligence in War is a thought-provoking work that ranks among John Keegan’s finest achievements.

"The author is the most popular, and perhaps the best, contemporary writer of military history." (Booklist)
"His case histories offer enough revelations and drama to satisfy any espionage buff....Keegan is always a pleasure to read for his wit, insight, and style." (The New York Times Book Review)

John Keegan is always an interesting writer. A good story teller. A good conveyer of fact. However, this book is mistitled. It is not a history of intelligence in war, it is a history of war with a bit of intelligence stuff thrown in for spice. It is an enjoyable book, but somewhat of a letdown if you are looking for the "spy" stuff.

One thing that Keegan does very well though, in the lengthy stories he tells, is to give you an appreciation of the limited value of intelligence in actual battlefield decisionmaking. Which may be why the stories are more about battlefield & strategic events than spying. The intelligence gathering brings forward useful information to commanders, but in the end is usually so stale or easily misinterpreted ... or quickly made obsolete by battlefield actions ... that its value is over-rated in the popular literature. Keegan proves these points repeatedly.

Yes. The book is a fairly good overview of intelligence in war and uses tangible examples to illustrate key concepts.

The book throws out a really key claim that the future of intelligence will need to focus heavily on HUMINT; however, it misses the opportunity to provide any strenuous examples of HUMINT in action. I.e., the reader is left wondering what operational role intelligence currently plays and needs to play in modern warfare & counterintelligence.

Do you think Intelligence in War needs a follow-up book? Why or why not?

Yes. The book seemed provided a good and in depth look at intelligence from the 18th - mid 19th century, but really needed to provide a more expansive look at pre-18th century and modern intelligence collection & its interaction with the military. Both also need intensive illustrations similar to the communications illustrations of Naval warfare. There was no knitty, gritty of HUMINT, which is what I most wanted to learn more about.

John Keegan does it again

Booklist calls Keegan "the most popular, and perhaps the best, contemporary writer of military history." I'd say he's one of the best contemporary writers of any genre, and a writer whose books belong on the shelves with the greatest writers of all time. Why? The extraordinary insight Keegan brings to his a very complex subject, matched, as is the case with all great stylists, a command of language equal to the task. Keegan is primarily an historian with no axes to grind but one who rather, in book after book, brings his axe (a jazz term for instrument) to providing a profound human understanding of a subject I had always thought boring until I picked my first JK book, The Face of Battle. This by now great classic looks at battle from the foot soldier's perspective (four different battles spanning over 1500 years) with the purpose of understanding, psychologically, behaviorally, historically, and, put it this way -- humanly -- what is going one in such scenarios of carnage and death. Intelligence in War: Knowledge of the Enemy from Napoleon to Al-Qaeda, is no less exceptional. Keegan takes on our age's mesmerizing fixation with intelligence and gives a stressed warning for those fighting al Qaeda to "shorten their swords" i.e, battles are won not by intelligence but by engaging (and in this case infiltrating) the enemy. Intelligence in War is all about the limits of intelligence in war as it spans in great and intriguing detail specific cases that illuminate given subsidiary points of the thesis.

Makes his case with crowded narrative

Excellent rendering, by Richard Matthews, of one of our finest war historians. Keegan, in his Face of Battle (a great work despite the scores here), believes that chaos is the hallmark of battle, and in this survey claims that, while important, intelligence is rarely crucial to war outcomes. Here, Keegan backs up his thesis but devotes, for me, too much narrative to battle details, reeling off operational statisticsj to the point where intelligence almost seems parenthetical. This muddles the focus, and I come away with the drift of his argument but still unconvinced.

He using specific times in history to show the how intelligence impacted decisions. He shows how, in many cases, the impact of intelligence is overrated and that battle are won in the field.

The narrator is fine.

The title rather implies that the scope would. Not focus on Europe and the 20th century. Keegan is the best so it is worthwhile just not as expected.

Nothing is perfect, least of all predictions

#Intelligences has been come a ubiquitous word in today’s speech patterns but, rather few people understand what it is or what it is capable of accomplishing. When politicians deride intelligence professionals, I would hope, someday, the average citizen will have the understanding of the subject as laid out here to refute that assertion. Intelligence helps win wars but, it is not panacea. This book will give readers a better footing to grasp the finer points throughout the last few hundred years to better grasp that fact. Love this #historylesson and I think you will too. #tagsgiving #sweepstakes

Yes -- this is best book I've encountered that examines intel in perspective -- the contribution it can make and its limitations.

What was one of the most memorable moments of Intelligence in War?

The book examines a series of case studies illustrating where intel fits into the conduct of war. There are numerous practical examples, and the author gives the background that helps the reader understand his viewpoint.

Have you listened to any of Richard Matthews’s other performances before? How does this one compare?

No, I have not, however his rendering of this work was completely appropriate to the content.

Hard to choose: I knew the generalities underlying many of the case studies, but the author filled in so many blanks in my knowledge that it's difficult to choose one.

The comment that the book is mistitled is, in my opinion, incorrect. If what was expected was a complete history of the evolution of intelligence in warfare, this is, indeed, not it. On the other hand, if one reads the title as expressing a view of how intel fits into the "big picture" of fighting and winning or losing a war -- as I understood it -- the book gets an A+. To understand the point, one has to understand the context, and the author's detailed presentation of his research, reinforces his premise (whether I agree with it wholly or not) brilliantly. I would recommend the book to any student of the forces at work in the conduct of warfare, and the focus on specific examples throughout history gives his message power.