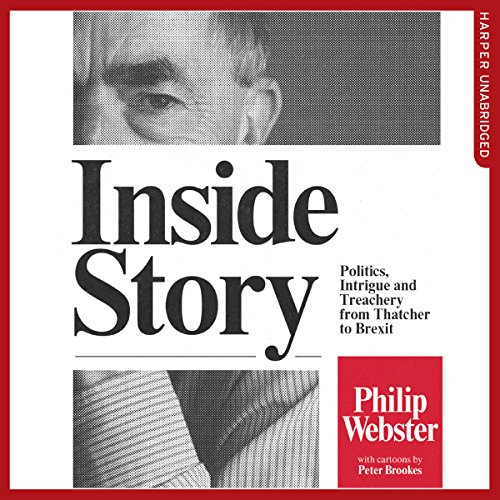 Inside Story: Politics, Intrigue and Treachery from Thatcher to Brexit

Inside Story: Politics, Intrigue and Treachery from Thatcher to Brexit

From one of the greatest political journalists of recent times, an insider's account of four decades of covering the British political scene, packed with tales of the biggest political happenings of the last half century.

Webster offers fresh insight into the great stories of his time. He gives a frank and revelatory insider's account of great political events since Michael Heseltine brandished the Mace, the night the Callaghan government fell, the day Sir Geoffrey Howe brought down Margaret Thatcher, the day Tony Blair said farewell, the night MPs voted for war in Iraq and every Budget and autumn statement for 40 years.

With the wit and geniality that has made him so many friends in politics, he reveals how stories came into his hands and how political journalism influences events as they unfolded. He has witnessed what he terms a golden age of political journalism, and this book offers an intimate account of his trade. The essential handbook for anyone interested by the craft of journalism, Inside Story reviews three decades of lead stories and the many politicians, great and small, he has encountered.

"Webster is simply the best - a journalist with a sensational range of stories." (Andrew Marr)
"Philip Webster is a journalist of real intelligence and integrity with an ability to get on with all sides of the political spectrum." (Alastair Campbell)
"One of the greatest political journalists of my lifetime." (Fraser Nelson, editor of The Spectator)
"A brilliant journalist." (Tony Blair)

Shame about the narration

I would probably recommend that a friend read this book rather than listen to it.

Covering a series of independent stories key to the author's career, there are no particular highlights, rather a sequence of stories that the author considers particularly relevant. These may or may not be of particular interest to the listener.

This is probably a fascinating book for anyone who has an interest in UK politics. I would, however, highly recommend a new version be recorded by a professional narrator. Mr Webster's rendering is unfortunately rather monotonous and stilted and does the book a disservice, in my opinion.

This book is not appropriate for a movie (series of "episodes" not directly related to one another).

Read this book if you want an excellent journalist's inside story of coverage of U.K. politics for the past few decades, do not opt for the self read audio version!