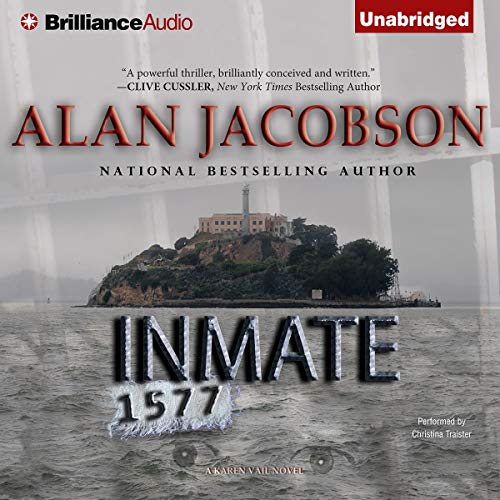 When an elderly woman is found raped and brutally murdered in San Francisco, Vail heads west to team up with SFPD Inspector Lance Burden and her former task force colleague, Detective Roxxann Dixon. As Vail, Burden, and Dixon follow the killer’s trail in and around San Francisco, the offender continues his rampage, leaving behind clues that ultimately lead them to the most unlikely of places: a mysterious island ripped from city lore whose long-buried, decades-old secrets hold the key to their case. Alcatraz. The Rock. It’s a case that has more twists and turns than the famed Lombard Street…and a novel that Clive Cussler calls “A powerful thriller, brilliantly conceived and written.”

Would you consider the audio edition of Inmate 1577 to be better than the print version?

What other book might you compare Inmate 1577 to and why?

Wow, I haven't read too many police procedurals so me, personally, I can only compare it too Michael connely's, "The Black Echo" which might not be that far off-both books involve police searching for a serial killer and both books have a fair amount of "edge of your seat" suspense so ya, I'll stick with that comparison.

Christina did a pretty good job with voices meaning she didn't totally butcher any accents and the men sounded like men and the women sounded like women so she did alright. However, from time to time she did sound a bit monotone but it wasn't so bad that it lessened the audio experience for me. She was O.K.

No, I can't say I was really moved by the book but I did enjoy it and it kept my attention throughout which isn't easy to do considering the length of the book.

Great deal for the price!

Where does Inmate 1577 rank among all the audiobooks you’ve listened to so far?

What other book might you compare Inmate 1577 to and why?

another great book in the collection

Great book, looked the tie to the others but still holds it's own. Very action filled and unexpected twists.

Over all two good stories that meet. Inmate and son story was better than the police story. I found that pretty uneven. Decisions made be the heroine were often not believable. I didn't warm up to her.

If you’ve listened to books by Alan Jacobson before, how does this one compare?

Did Christina Traister do a good job differentiating all the characters? How?

I liked much of her narration except the dramatic yelling.

Was Inmate 1577 worth the listening time?

Takes a while to get into

I love the Karen Veil series. In this book I found it took some time to get interested in the story. But overall it’s a great read.

definitely kept my attention every step of the way. I listen to it while at work and found myself just listening and not working more than a few times. will definitely read more by this Sutherland and with detective Vail.

Proven Not Guilty and Found Guilty

Listening to the book, Inmate 1577, was time well-spent. I was made aware of the difficulties that someone would have to face, if accused of murdering your wife, found not guilty and once leaving the prison finding how difficult it would be to pick up your life and go on as you had prior to being incarcerated for murder in the first degree. His son was placed in foster care and after his father was released from prison, he and his father left their home town and moved out of state, hoping that he would be able to find gainful employment. After all, he did possess marketable skills to be hired and make a salary sufficient enough to provide for his son and himself. However, they continued to move from one place to another, never quite finding where they belonged.

The most interesting aspect of the story was the fact that once released from prison the man was unable to find gainful employment. He realized, that even though he was found not guilty, the general populating still considered him guilty. He did find unsatisfactory jobs, but after awhile he chose to rob banks in order to have money to survive. He was placed in prison after getting caught robbing the second bank. He stood trial and was convicted. He was given a 45 year sentence. The least interesting aspect of the story was not including any details of how his 10 year old son had grown up, while he lived in foster care after his father was put in prison. There were assumptions made, along with a few substantiated facts, when he made his appearance towards the end of the book.

Which character – as performed by Christina Traister – was your favorite?

Could you see Inmate 1577 being made into a movie or a TV series? Who should the stars be?

I could see Inmate 1577 being made into a TV series. I'm not good at names. However, if I see a face I know the person but not the name. I can't even remember the series name that appeared years ago, where the man kept, Running for His Life. Is that correct? This year an old series is being brought back to TV, Ironsides.

The book held my interest but I was able to set it aside. I didn't find any reason to finish it all in one day. The plot of the story was a mixed bag. It was as if the book was divided into sections. The book was not written smoothly, it was as if the story would be placed on hold and start up where the last part ended. The story was written like a weekly series for TV. You would continue to follow up each week having to remember what happened last week. I had to stop and think how one part of the book fit with what had happened before or sometimes after. However, all in all the story can be put together after it's over. I found that I had to take time after listening to the book and think. Usually, after I finish listening to a book I can remember with rapid thoughts, what happened from the beginning to the end and it all makes sense.

What a great thriller

Through hearing the book I was torn between sympathy for the inmate and the question who murdered the recent victims. The book is traveling in time between the 1950/60 and the now. During their investigation Karen Vail and her help (from SFPD) become a great team.
The moment when I got to know for sure who killed the victims and why was breathtaking.
Also, the narrator is great. Christina Traister pushes a lot of emotion into the caracters. This is my first book from Alan Jacobson, but I`ll read some more of him, I`m sure.