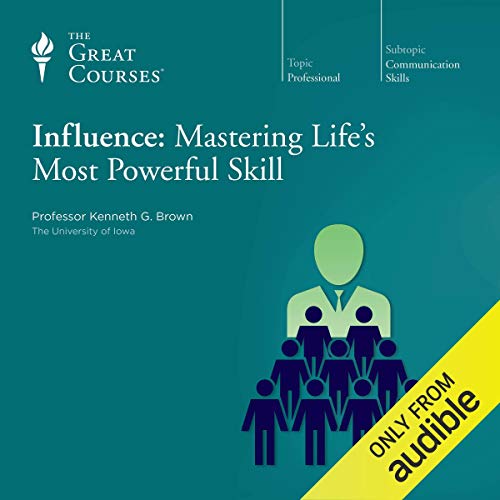 Don't just let influence just happen to you. Instead, take charge of your life by grasping the science behind how influence works and by strengthening your own skills at using it to your advantage. In this dynamic 12-lecture series, you'll discover how to tap into the hidden powers of influence - and use these powers to enhance your life in ways you never thought possible.

Using clear and accessible language, Professor Brown teaches you how and why influence works. You'll explore the four key factors involved in influence attempts; delve into exciting psychological and sociological research and experiments; ponder the ethics surrounding influence by studying the lives of historical leaders (and despots); get solid tips for becoming more influential; and hone your skills with simple exercises for everyday living. By the final lecture, you'll be able to harness the power of influence at home, at work, at the store, in your social life, and anywhere else you may need it.

For me personally this book is really great at expanding your level of knowledge about influencing others and how to identify those who might use influence for malicious purposes. As always the great courses lectures give excellent examples of persons in history that model the level of influence and ethics that are needed to become a great leader

practical lessons backed up with research

What made the experience of listening to Influence the most enjoyable?

I've listened to another 'The Great Courses' book, and this one actually took me in. It was EASY to listen to, which is important for this kind of non-fiction, life lessons kind of thing. To be fair, it is about Influence, so the guy giving the lectures probably should be able to tell a good story.
But Professor Kenneth Brown was personable and got you to think about each point with both practical lessons, and referenced research.
And unlike many other books, he doesn't just say here is the research... now figure out what the lesson is for yourself... he actually tells you what is the correct response.
Very nice for a change.
For example a good handshake makes a world of difference in interviews, with him citing the case studies with practical experiments and the real world manager's decisions.

Not really a story.

What does Professor Kenneth G. Brown bring to the story that you wouldn’t experience if you just read the book?

His personable character.
It's the kind of book where there is so much information that you wish you had the physical book as well so you could highlight stuff, and come back to it, carry it around and refer to it.
If it was JUST the book, then i think i wouldn't have the courage to listen to it. The Professor explains everything with passion, because after all this is his subject, which creates interest just by itself.
-I think this is a book that could benefit highly from named chapters in audible. so far there are 5 'chapters' which are really the 5 individual lectures... however there is so much information covered in each of these, that these lectures should be broken down into topics.

Its the kind of book that you want to refer back to, but in its audio book form, you really need some sort of reference labels, otherwise you don't know which part is which.

Well, yes the handshakes. + how to influence your manager rather than actually doing a good job to get the promotion.
But to be honest this is the kind of book that 1/4 of the way through, i knew i would have to listen to it again at least another 2 times.
There's just so many lessons in here with so much useful and demonstrat-able evidence, that it's not enough to remember everything in 1 sitting. Or at least not if you're taking notes.

Very impressed. Recommended it to my dad who is now listening to it. It's the first audiobook version of a lecture series that i truly enjoyed and will listen to again.
But i think because of the fact that you want to refer back to the lessons/ points in the book you really either need chapter titles or the actual book itself.

I think this book is practically applicable for anyone working in an office environment, and enjoyable as a good listen for pretty much everyone else.

Not the book you think it is

Mostly focused on avoiding persuasive sales people that may take advantage of consumers. Was disappointed all the way through.

I was disappointed with this course as it was a review of other courses I have taken. If it wasn't for having already heard all of the information before, I think this course would still have been lacking because I don't think it delved deep enough to allow someone to &quot;Master Life's Most Powerful Skill&quot;.

More for consumer vs. sales person

What did you love best about Influence?

Great content with regards to supporting literature and case studies.

The Good:
Professor Brown executed the performance well. He particularly did a great job tying everything together at the end of the lectures. It is obvious that the content was well thought out.

The Bad:
I gave the performance a 3 out of 5 stars only because I felt the perspective was a tiny bit biased. During the lectures of sales and being both a consumer and a sales person. I felt that he treated sales as something to be afraid of, or to protect yourself against. This became especially apparent when he mentions his personal accounts with sales people. Don't get me wrong, I did get some good take aways being a professional sales person. I felt, however, that the content would be better suited for a cautious consumer than an aspiring sales person.

Was it worth it?
I do believe it was worth listening to. I learned a lot, and despite what I felt was a biased perspective of sales, he conveyed a lot of helpful tips and data that I benefited from.

What did you learn from Influence that you would use in your daily life?

The most important points I took away were on the lessons of public speaking. He had great examples of his concepts and related them together in a very interesting way.

Great for every “nice guy”

For anyone struggling with bullies or self confidence this book is a great confidence builder because it demystifies what it takes to be a leader and influence yourself and others you care about without turning into a dirt bag.

this is a great resource to understand influence

this is a great resource to understand influence. I assumed it would be because the reviews and it's true. In addition to understanding influence and persuasion it delves into the topics of salesmanship and Leadership which one expected to me. stories are concise and practical so that applications are easy to find and practice

It did a good job of giving you acronyms to help you remember the points, as well as stories and examples of research to help illuminate those acronyms

I thought it was an excellent audio book. It was compelling and believable. It helped me with my master's degree, with work, and my personal relationships. It is outstanding and highly recommended. Why did it take me so long to discover? I don't know.

outstanding job making this title. will listen to it again and again and a couple more times.