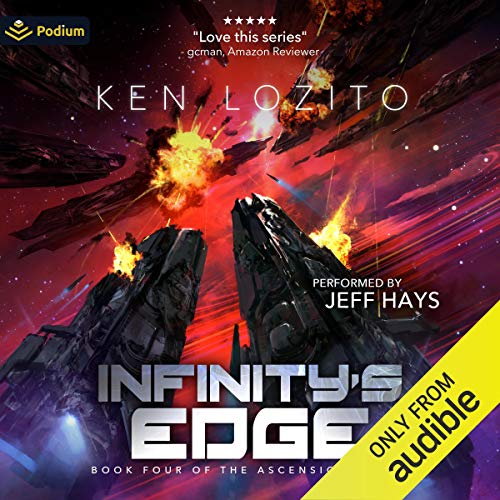 Earth's time is running out.

Sixty years ago a plan was conceived to help humanity survive its first contact with an alien race. Now it's time to put that plan to the test. No country can stand alone. The world must unite if there is to be any hope of survival.

Commander Kaylan Farrow and her crew are investigating an ancient alien signal from beyond the fringes of known space. After months of searching, the Athena is starting to wear down. It's only a matter of time before a catastrophic failure destroys their ship, but if they return to Earth now, Kaylan knows that humanity will not survive their first contact with hostile aliens. They must find the source of the signal and with it a means to end this war before it has a chance to reach Earth.

Infinity's Edge is the fourth book in the Ascension space opera series. The crew of the Athena will risk everything to unravel the mystery of an ancient alien race whose wars nearly destroyed the galaxy. On Earth, people must accept that the world as they knew it is gone. The Xiiginns are coming to pull Earth into the crosshairs of an interstellar war.

Yet another outstanding work

Trusting that my previous remarks suffice to express how I feel about Ken Lozito's work, I shall just mention that I look forward to continue exploring all books of the ASCENSION series. Bravo!

I felt as though I was there right there racing through space, facing challenges that endangered the whole human race. We had to outsmart harsh alien enemies or face extinction.

Lozito is a master story teller. How else can you be more entertained? I listened to The First Colony Series audiobooks and I really enjoyed them. Now I am enjoying this Ascension Series. Please keep writing so that I can continue being immersed in exciting off world adventures.

Book 4 of this series continues where the last one finished. We see the crew of the Athena searching for the Dars, but finding them is not what they expected. The Boxans, and the Xilgins have found the SOL system, and battle has commenced. Will earth with the help of the Boxans beat off the Xilgins fleet? I am looking forward to book 5

This book is outstanding, I am completely in love with series. Keep it up please.

Narrator is amazing in the variety of voices, especially changing from male to female, truly seems like a full cast.

The Athena Get's THIS Close to a Homecoming

This episode moves the story and Athena quite a bit forward and with some rather intriguing encounters. While there is still interaction with the Xiiginn, most of that happens late in the story. Most of the novel focuses on the Boxen and Athena crew looking for safe-harbor and the Boxen and previous commander of the Athena attempting to escape Pluto before the Xiiginn finds them.

There are plenty of close-calls and some role-reversal plot twists that continue to make for an entertaining novel, all the more so due to Heff Hays superb narration skills.