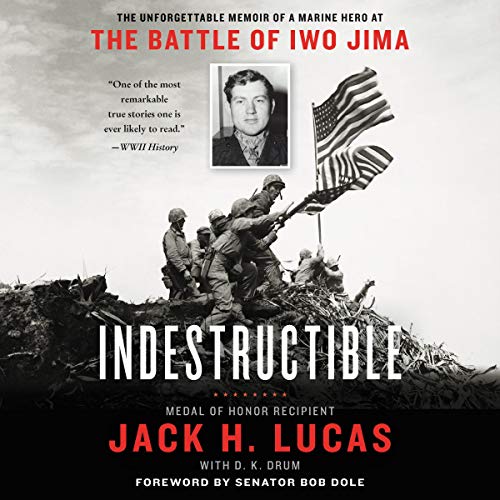 Medal of Honor recipient Jack H. Lucas’ classic memoir of his heroics at the Battle of Iwo Jima - with a foreword by Bob Dole and reissued to coincide with the 75th anniversary of the battle in 2020.

On February 20, 1945, the second day of the assault on Iwo Jima - one of the bloodiest battles of the Pacific theater in World War II - Private Jack Lucas, who was only 17, and three other Marines engaged in a close-proximity firefight with Japanese soldiers. When two enemy grenades landed in their trench, Lucas jumped on one and pulled the other under his body to save the lives of his comrades. Lucas was blown into the air as his body was torn apart by 250 entrance wounds. He was so severely wounded that his team left him for dead. Miraculously, he survived.

While on the hospital ship Samaritan, his spirit soared to see the American flag flying atop Mount Suribachi - the same flag immortalized in Joe Rosenthal’s iconic photograph, Raising the Flag on Iwo Jima. Lucas endured 21 grueling surgeries and carried 200 pieces of shrapnel in his body for the rest of his life. Awarded the Medal of Honor, he became the youngest Marine in US history - and the youngest of all World War II servicemen - to receive the honor.

Indestructible tells the remarkable story of an extraordinary American possessed with a fierce determination to serve his country.

I loved this book. Partly because my father was 19 when he was sent to Iwo Jima. It was interesting to hear all the trouble Jack Lucas went to get in the fighting at 14 years old. It seems incredulous that he was able to pull it off and yet he was a decorated soldier by the age of 17. It's a pretty powerful book and I enjoyed the story line and how it was written and read. I would definitely recommend this book to anyone who likes a good action drama that's not fiction!