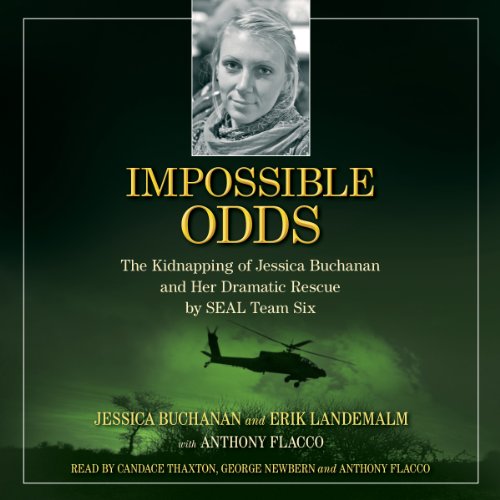 A harrowing and heart-wrenching memoir of humanitarian aid worker Jessica Buchanan's kidnapping by Somali land pirates, her three months in captivity, her rescue by the Navy SEALs, and her husband's extraordinary efforts to help bring her home.

In 2006, 27-year-old Jessica Buchanan arrived in Nairobi, Kenya, with a teaching degree and long-held dreams of helping to educate African children. By 2009, she had met and married the man of her dreams, a native Swede named Erik Landemalm, who worked to coordinate humanitarian aid with local authorities in Africa. With dreams of starting a family, they moved from Nairobi to Somalia, and their future couldn't have seemed brighter....

But on October 25, 2011, Jessica and a male colleague were kidnapped at gunpoint and held for ransom by an organized band of Somali land pirates. For the next three months, Jessica was terrorized by more than two dozen gangsters. She was held outdoors in filthy conditions and kept on a starvation diet while her health steadily deteriorated. Negotiations for ransom dragged on, and as the ordeal stretched into its third month, the captors grew increasingly impatient.

Every terrifying moment Jessica spent suffering in captivity was matched by that of her adoring husband working behind the scenes to deal with her captors. Finally, on January 25, 2012, President Barack Obama ordered a rescue operation by a team of 24 Navy SEALs. The team killed all nine kidnappers, with no harm to the hostages, who were quickly airlifted out on a military rescue helicopter.

In riveting detail, Impossible Odds details Jessica and Erik's mutual journey during those torturous months. Together they relate the events prior to the kidnapping, the drama of Jessica's fight to stay alive, and Erik's efforts to bolster and support the hunt for her while he acted as liaison between their two families, the FBI, professional hostage negotiators, and the United States government.

If you could sum up Impossible Odds in three words, what would they be?

Jessica, of course. She always looked out for Paul who was kidnapped along with her. She kept her cool even though she was angry because she knew that their were two lives at stake not just one. She was ingenious in finding ways to care for herself even though they didn't give her the supplies she needed to help her survive.

In the beginning of the book, at the time of Jessica's kidnapping... I was worried about the female narrator not showing enough emotion. I kept listening and found that she did in the rest of the book. She did a great job. The other narrators were wonderful too and it was nice to change voices when changing perspectives and characters.

I love the title of the book and wouldn't change it for a possible film. It's perfect!

I didn't know anything about this book or the kidnapping that had occurred until a friend said that she saw the author (Jessica) on a talk show recently. My friend never listened to the audio book so she couldn't recommend it to me. I decided to take a chance on it and found that it was absolutely inspiring. I highly recommend it.

Come and Rescue Us, PLEASE

What made the experience of listening to Impossible Odds the most enjoyable?

What the experience of listening to Impossible Odds the most enjoyable was the way in which it was written. I enjoyed listening to the varied narrators. I was happy to know that Jessica Buchanan and Paul were rescued.

What was one of the most memorable moments of Impossible Odds?

The most memorable moment of Impossible Odds was when a member of SEAL Team Six presented Jessica Buchanan with the American flag after being rescued. Those men of SEAL Team Six did a bang up job rescuing Jessica and Paul. If I were in need of such a rescue, I would hope to be rescued by them. Jessica had nothing but praise for SEAL Team Six.

The narrators bring the people to life. I felt that I could have been the kidnapped. The verbalization put me there.

Somalian Kidnapper's Cause Terror and Revel in Cruelty

Somalia has no government. The people of Somalia are uneducated, the poorest of the poor, starving, fearful and are taught to hate. Jessica Buchanan put her fears aside and left the safety of her base camp to attend a meeting concerning the education she was providing for the African children. She questioned the new driver in her mind but did not voice her concerns. Her and her companion Paul were both kidnapped by Somalian's for ransom. The sum of 45 million dollars was their first request. The amount continued to go down as time dragged on. Both Jessica and Paul were treated inhumanely. They were not given enough water or food which led to dehydration, starvation, weakness and illness. Care packages were provided for them but nothing ever reached them because they were stolen. Jessica had her thyroid medication with her but it was taken away. The drones that were watching from high above could visualize Paul and Jessica's plight. Jessica required antibiotics. She had not been allowed to take the thyroid medication which caused her to become infected with a urinary tract infection. A UTI requires antibiotics because the infection could get into the blood causing sepsis, which is life threatening.The kidnapper's kept their prisoner's outside at all times. They were unable to keep themselves clean, urinated and defecated behind bushes without any toilet paper. The Somalian people do not have any toilet paper. They were given minimal space to exercise, they walked in circles. Jessica kept her sanity by talking to her recently deceased mother, she kept in contact with Eric, in her mind. Jessica and Paul were in captivity for 93 days and each day was worse than the one before. The kidnapper's held guns to their heads and kept them in constant fear with intimidation and a multitude of other horrors. When it was determined that the health of Jessica was in jeopardy due to her deterioration from illness and would die, was when she and Paul were allowed to be rescued and not before. President Obama gave the order for SEAL Team Six to rescue Jessica and Paul.

The book was well written and made the reader a part of her story. Jessica wanted to tell the world her story. Her memoir is a good listen.

This was an incredible example of what goes through the mind of a captive. The detailed account of how Jessica worked so hard to stay mentally fit and present is revealing, enlightening and striking. Understanding what was happening on all sides of the kidnapping was interesting as well. Jessica and the other authors allow us to experience the ordeal with her, with the kidnappers and with her husband and family.

Unfortunately I can give the performance only 2 stars. Candace played Jessica's voice, and she did a great job with the emotion of the situation. However; her staccato, William Shatner "esk" style of speaking distracted me and I never quite got used to it. She had a tendency to turn One. Sentence. Into multiple. Sentences. Usually I can quickly get used to the new style of a performer, but I couldn't get past Candace's style with this book.

I don't know who the other narrator was, but I found his performance to sound too much like an anchorman on the evening news.

There were a couple of slow areas in the book, but for the most part, I wanted to continue to listen. The suspense of the negotiations and how it would all end built consistently throughout the book.

If you are considering this book to better understand an in depth account of how she was rescued, I would suggest you do not purchase it. However, if an account of how she was kidnapped, and the terrible conditions she suffered during those 93 days in Somalia interests you, I would recommend it highly. But due to the lacking performance of the narrators, I suggest you purchase this with a credit.

I found this book very well written. It gave me greater insight into NGO's in third world countries and also dispelled the myth that NGO workers are clueless about the dangers of working in third world countries (but confirmed the notion I have that they do not provide adequate security for their employees). I also liked how it showed the role of the FBI - I never considered their role in these situations. I also liked how we get to understand the angst of Buchanen's husband and family and their role in her rescue.I really enjoyed the book.

I watched the movie Captain Phillips and finished this book in the same week. It gave me more insight to what life in Somalia is like. There are a lot of Somolians that live near hear. I was in the Marine Corps during the time that Blackhawk Down took place. I had a lot of resentment toward the Somolian people that I see in public, because of the pictures I saw of our men being dragged through the streets by the crowds of crazy people. This book gave me a better picture of what life is like there and why some Somalians do the crimes they do. It has also helped me put the Somalians that have moved into my area in a better light. I enjoyed the book very much. Jessica's part was well written. What was apparent in her life with her captors is the fact that it takes more than just whit and grit to get through an experience like that. I think she was divinely protected from being harmed more than she was. Once again the men of the spec ops community showed great bravery and professionalism. My thanks to them for another job well done. My hat of the people like Jessica and Erik for working toward making life better for all in spite of the many threats that they face.

Awesome! Why you can always count on the good guys to lift you out of the most dangerous conditions, unconditionally and disappear in to the darkness where they operate undetectable wanting no fame or recognition...just do the right thing.

A very gripping story. Very well written. Deftly depicts the depravity of man who gives himself to darkness. And the goodness and strength of man who chooses the light.

Loved it! Jessica revealed herself as a real person with honesty and humility..
Great book! Read it!

Loved the audible reading of this book. Very well written, too! Highly recommend this book.

An amazing and dramatic story. I could not stop listening.

I heard Jessica tell her story during a conference in Austin, Texas. The 800 people in the room were spellbound! I then searched to hear her entire story thru Audible and was mesmerized. I praise God for how he watched over her. I highly recommend reading this true story!!