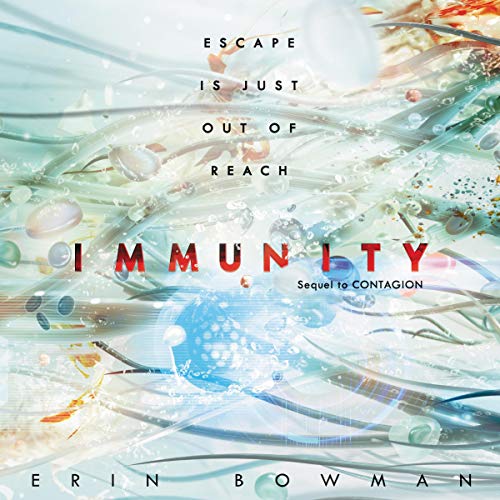 Thea, Coen, and Nova have escaped from Achlys, only to find themselves imprisoned on a ship they thought was their ticket to safety. Now, the nightmare they thought they’d left behind is about to be unleashed as an act of political warfare, putting the entire galaxy at risk.

To prevent an interstellar catastrophe, they’ll have to harness the evil of the deadly Achlys contagion and deploy the only weapons they have left: themselves.

Fans of Jonathan Maberry, Rick Yancey, and Madeleine Roux will relish Bowman’s tense, high-stakes conclusion to the events of Contagion.

The ending feels a little rushed and honestly kind of stupid. I won't go into detail bc i don't want to spoil anything. The preformance from the narrator is excellent and over it is still a very good read.

Fun, easy listen with some simple twists.. Some interesting what if's and human nature exploration, although plausibility didn't have a high priority.. The narrator made a simple story come to life, and made the characters real.. Glad to have read it and sad the series is finished..

Took a little bit for me to get back into but I really enjoyed how everything wrapped up.

great listening, cant wait to see where this story goes from here, I'm hook on it.

Just as good as the first

I loved this series. Immunity kept up the tension and fast pace of Contagion. There was also a simmering undercurrent of danger involving the bacteria getting out. I wasn’t sure the story would be as gripping as the first since the environment changes, but Bowman really kept the thriller vibes going. So good! And looking forward to more of her books in the future.

Awesome ending to a great story! I will definitely be reading more stories by Erin Bowman! Amy McFadden is fantastic narrating this book! You won't be disappointed!