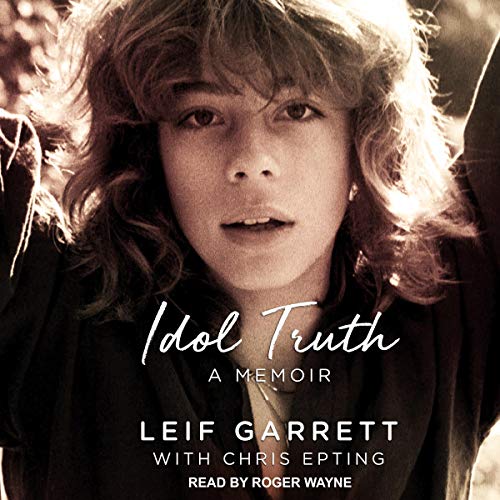 Former teen idol Leif Garrett bares his soul for the first time ever, revealing his deepest secrets about the extraordinary highs and devastating lows he has survived over the years.

He was a hardworking child actor in the early 1970s, appearing on dozens of popular films and TV programs. Then he was offered a chance to make a record and "Leif Garrett, teen idol" was born. Millions of teenage girls all over the world covered their walls with his picture. His face adorned hundreds of international magazine covers as he became one of the biggest and most desired heartthrobs in history. There were jet-setting tours, TV specials, and hit records, along with an endless supply of beautiful women, alcohol, and ultimately, the drugs that sent this shooting star into the darkest depths of addiction. Idol Truth is a harrowing survivor's story as well as a charmed tale filled with compelling pop culture characters - from Michael Jackson and Brooke Shields to John Belushi, Freddie Mercury, and many more. It's the first time ever that Leif Garrett has come clean about his life, revealing all the details of his spectacular journey.

Nice to hear his story, made me sad for his childhood, but happy that he has made thru the craziness. Good job Leif!!

From a new fan

As a teen girl I have pictures of Leif all over my walls but I took them down when he canceled the Atlanta show heartbroken. As I listened to the story of Leif's life I now know why I stepped away...all the drugs. I still paid attention though and somehow hoped he would clean himself up. I admire what he had to endure and I am a truly sad for the teen star who was manipulated by the system. It was fun stepping back in time to remember well some of the things mentioned. We all have grown. Best always to Leif.

Leif - a true idol life in the 70’s and 80’s A sad but true washed up idol life in 90’s and 2000’s. Anxiously waiting for your ultimate comeback. Scotti brothers - I would love to hear a public apology to Leif. No judgement it was a different time back then….but an apology is needed.
Leif not everything that went bad was the fault of a non existent father or poor management or pressure to support your family - some of it was you just being a famous kid in LA with weakness. It’s happened to many - some famous and sone not at all famous.
All my love -

I enjoyed this memoir very much; however 80% was about his glory days and he seems to gloss over his downfall with little explanation as to how (or if?) he has really turned his life around. Heroin clearly stole his life away yet he makes no mention as to how he stopped or if he ever did. This is a huge blank space in this memoir.

I truly loved this book. Leif is a beautiful soul and I really enjoyed his story. I do feel quite sad after listening to it, but, I am a female and part of the Generation X, who loved Leif back in the 70's and 80's, and who always believed that he truly was a kind soul, and that he just lost his way like the rest of us throughout the years.

I really enjoyed his story and can relate to his pain. I love you Leif. I always will.

I was always a fan of Leif but not over the top about it. His story is brave, heartbreaking and so inspiring. I am so happy for him that he was able to defeat addiction, it’s hard and have a lot of respect for people who make it to sobriety. Can’t even imagine the pressure of growing up in the public eye. So happy that he has made a great come back and is using his position to inspire others to follow suit!

I Loved it, but so sad to hear the struggles of a teen idol.

Good Book but Narrator has trouble with names

Good, interesting book about Garrett as manufactured teen idol but Narrator screwed up on the film name name Gigot (gee go) not pronounced gigget and Suge Knight is not pronounced Sooge - very distracting. He couldn't ask someone in the studio?

Unprotected Child In a Parasitic Industry.

I remember him being a constant in the late 70’s and then on a random celebrity show early 80’s and then just seeing him attached to whomever he was dating, Nicollette or Justine.

After listening to this book, I feel very sad for Leif and literally being abused by opportunists and as a parent myself, am so angry that he was not protected physically, emotionally or financially.

It’s the all too common story of a parent living through their child and the burden of everything falls on a child- unacceptable.

I feel just sadness, because he does have charisma and a very magnetic personality and he should’ve had a much longer career than he did.

I am very glad that he came out the other side alive and everyday is a chance for a new beginning. I absolutely would love to see him get into podcasts, media etc.

I wish him nothing but the best from here on out. I did enjoy listening to it and it took me back to the glam 70’s- roller skating, disco and satin jackets…

I will always support his work and art because he has and will always have “star power “.

I was a fan & appreciated the honest story telling of the book. The only thing I had issues with were blatant mispronounced words and names. That kind of thing is like finger nails on a chalkboard to me. Get past that & it’s good buy.