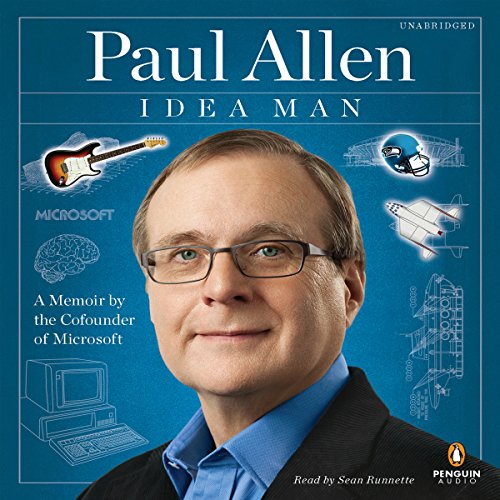 By his early 30s, Paul Allen was a world-famous billionaire - and that was just the beginning.

In 2007 and 2008, Time named Paul Allen, the cofounder of Microsoft, one of the 100 most influential people in the world. Since he made his fortune, his impact has been felt in science, technology, business, medicine, sports, music, and philanthropy. His passion, curiosity, and intellectual rigor - combined with the resources to launch and support new initiatives - have literally changed the world.

In 2009 Allen discovered that he had lymphoma, lending urgency to his desire to share his story for the first time. In this classic memoir, Allen explains how he has solved problems, what he's learned from his many endeavors - both the triumphs and the failures - and his compelling vision for the future. He reflects candidly on an extraordinary life.

The book also features previously untold stories about everything from the true origins of Microsoft to Allen's role in the dawn of private space travel (with SpaceShipOne) and in discoveries at the frontiers of brain science. With honesty, humor, and insight, Allen tells the story of a life of ideas made real.

can't believe it took me this long to finally read this. worth every minute.

Don’t pay attention to the negative reviews. This book was open and great to listen to. I admire Mr Allen.

There is far more to Paul Allen's story then "just" co-founder of Microsoft. His multi-faceted interests span life. Told in a compelling, yet intimate voice, this is the most interesting autobiography I have ever read.

Two part book. First, an inside look at the journey of a curious kid from his days mixing household chemicals in the basement through his co-founding and eventual departure from Microsoft. Second, a primer on how not to go shopping after hitting the jackpot.
Sadly, no mention of the egregious "patent troll" behavior by Vulcan, especially on small and growing tech start-ups.

This biography was a mixed bag. The parts about Allen's relationship with Bill Gates before Microsoft, and about his time working at Microsoft, were great. It really makes you realize how intergel Microsoft was at the time. They were involved with so much, listening to Allen talk about it was almost like reading Fire In The Valley. It was like hearing a complete early history of personal computers. When Allen finishes talking about Microsoft he gives his take on the computer industry, and it's pretty awesome to hear his perspective on the industry today. I really enjoyed these parts of the book. With that said, the beginning, before Allen meets Gates, and the parts about owning a basketball team and the non-tech investments he made after Microsoft were incredibly boring. I couldn't take it and ended up skipping these chapters. Finally near the end he starts talking about his tech investments. This part wasn't bad, but his involvement with his tech investments are never as interesting as his involvement with Microsoft. It really makes you wonder if he was as passionate about these investments as he was about Microsoft. Overall I'd say if you're into tech like I am then reading this is a no-brainer... you'll just end up skipping the boring parts like me. The parts I mentioned that were interesting are well worth the price tag.

Paul Allen was a great man

Living in the northwest we’ve known of Allen for years as the Trailblazers owner. Also the cofounder of Microsoft. What I didn’t know was how he used his wealth for much good. Contrast that with our billionaire president who thinks that wealth qualifies a person to high esteem just by having wealth alone. Allen had character.

Whole lotta of nothing

empty. weak. shallow. looking for more adjectives to describe the loss of the credit I used to buy this book

The part about Microsoft is good

Great account of Microsoft's early years. Too bad it is only a third of the book. The rest is about Allen's other activities, which are not so interesting.

Paul seems impressed with himself

I think what you get from this book if you read between the lines is that Paul was no different than any other engineer of the era, but was at the right place at the right time, but didn't have the true ambition that a gates or steve jobs did. But he got rich and cashed out. He fancies himself as something extraordinary from a technology standpoint but was really just a competent engineer.

But he got lucky and got rich... And is quite impressed with himself and how when you have billions of dollars you can buy friends and experiences.

this is his auto biography. it starts in his youth ang goes thru his Microsoft years in to his later life. he talks about his investments, his music, meeting celebrities, making and losing money, traveling the world, his illness and his philanthy.
I was impresses by his mind and diversity..