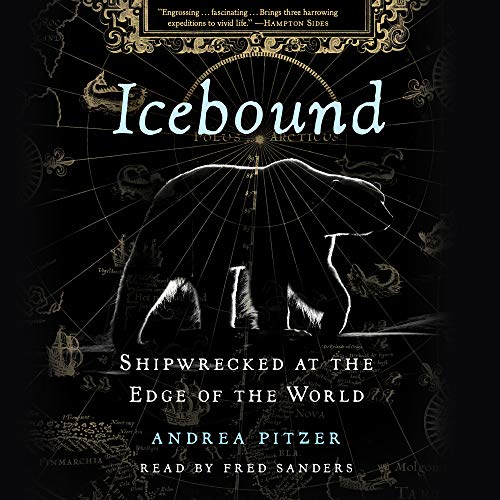 In the best-selling tradition of Hampton Sides’ In the Kingdom of Ice, a riveting and cinematic tale of Dutch polar explorer William Barents and his three harrowing Arctic expeditions - the last of which resulted in a relentlessly challenging yearlong fight for survival.

The human story has always been one of perseverance - often against remarkable odds. The most astonishing survival tale of all might be that of 16th-century Dutch explorer William Barents and his crew of 16, who ventured farther north than any Europeans before and, on their third polar exploration, lost their ship off the frozen coast of Nova Zembla to unforgiving ice. The men would spend the next year fighting off ravenous polar bears, gnawing hunger, and endless winter.

In Icebound, Andrea Pitzer masterfully combines a gripping tale of survival with a sweeping history of the great Age of Exploration - a time of hope, adventure, and seemingly unlimited geographic frontiers. At the story’s center is William Barents, one of the 16th century’s greatest navigators whose larger-than-life ambitions and obsessive quest to chart a path through the deepest, most remote regions of the Arctic ended in both tragedy and glory. Journalist Pitzer did extensive research, learning how to use 400-year-old navigation equipment, setting out on three Arctic expeditions to retrace Barents’ steps, and visiting replicas of Barents’ ship and cabin.

“A visceral, thrilling account full of tantalizing surprises” (Andrea Barrett, author of The Voyage of the Narwhal), Pitzer’s reenactment of Barents’ ill-fated journey shows us how the human body can function at 20 degrees below, the history of mutiny, the art of celestial navigation, and the intricacies of building shelters. But above all, it gives us a firsthand glimpse into the true nature of human courage.

Before reading Icebound, I was so confused about William Barents I thought he was of Bering Strait. Wrong. This is "Barents" from the Netherlands who explored the Arctic in the 1590s (!) - not far from the Middle Ages. Barents was the first to attempt a northeast passage from Europe to China through the Arctic. Of course such a journey with primitive equipment and knowledge was doomed, retold in glorious detail by Pitzer, but Barents and his crew were arguably the first "modern" polar explorers. Before the Arctic was unknown. After, the Arctic was a destination unto itself. Every polar expedition since traces back to Barents. When they returned home and wrote a best selling book, there was popular hunger for more. Centuries further exploration followed culminating in the golden age in the late 19th and early 20th century. Essential reading for polar literature fans, and 16th century European history.

This is a 5-star book all around. The author deserves full credit. However, the publisher's decision not to include a PDF with maps is unconscionable. The maps are critical to this book of exploration. I was able to piece the route together using Google Maps but it was not fun or easy. Sadly I must lower the rating, which might have the effect of lowering sales of the book, but this is frankly the situation, the book is incomplete.

great book about Polar exploration. it's full of great tidbits from other explorers and the root story of the Barents crew is awesome. I learned a lot and enjoyed every bit of it. highly recommend (keep a map of the Barents Sea and Kara Sea handy)

an amazing adventure that I had not heard of before. Incredible man over nature Survival Story

Fascinating story told as if you were there

This visceral tale of hardship and death that took place 500 years ago feels if if you're following along today. The research, writing, and narration are all great and it was suspenseful even as a historical piece with a fixed outcome.

I felt SO COLD

This is another book that may be better read than listened to, plus I wonder if the printed book has maps, etc. to illustrate exactly where these voyages were. I myself had to get out an atlas to see where Nova Zembla was. I knew nothing about this story so I can't comment as to its veracity as others have done. However, the men the sea, the lands and wretched cold and ice, blizzards night after night, were all so adequately described that I felt the stinging numbing cold of those unfortunate men. I was glad to learn the men stayed together and cared for each other-- a drop of humanity in a beyond-frozen icescape. The reader did a good job, expressing emotion but not wallowing in it. I am a sucker for an inspirational story but I didn't cry at the end of this book. Instead, I felt proud of the men who survived by the grace of God and their own wit, strength, and humanity.

It was interesting but too much was about how cold it was, not surprising

Made me appreciate the simple things

While listening I imagined being there and what the brave sailors went through on a good day let alone the desperate situation they were in. Amazing any of them survived to tell the story and build a legend.

While the author had to draw largely on the day to day log entries, the story came alive with animated prose and a real feel for the struggles of the crew.

I’d tip my hat, if I had one on,to these beyond brave early sailors. Their travails are colorfully described in this work. Well done author and narrator.

The narrator was annoying bad. I loved the story. Not well written , but kept my attention with the incredible story and detailed explanation