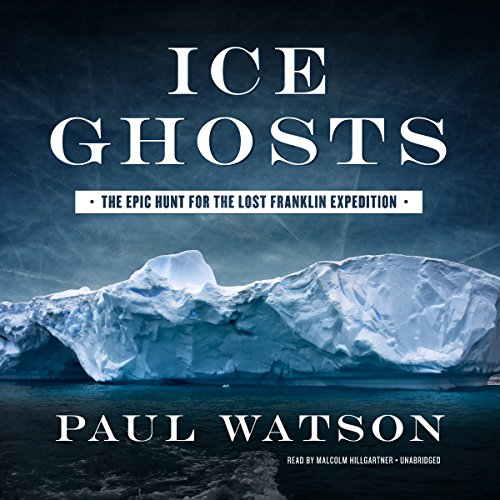 Ice Ghosts weaves together the epic story of the Lost Franklin Expedition of 1845 - whose two ships and crew of 129 were lost to the Arctic ice - with the modern tale of the scientists, divers, and local Inuit behind the incredible discovery of the flagship's wreck in 2014.

Paul Watson, a Pulitzer Prize-winning journalist who was on the icebreaker that led the discovery expedition, tells a fast-paced historical adventure story: Sir John Franklin and the crew of the HMS Erebus and Terror setting off in search of the fabled Northwest Passage, the hazards they encountered, the reasons they were forced to abandon ship hundreds of miles from the nearest outpost of Western civilization, and the decades of searching that turned up only rumors of cannibalism and a few scattered papers and bones - until a combination of faith in Inuit lore and the latest science yielded a discovery for the ages.

Get to the point

This is a detailed account of one of the most popular stories in Arctic exploration history. The average reader may find the level of detail to be overwhelming. The book fails to convey sufficiently why Franklin is such a matter of obsession for some people. Franklin is portrayed as a bumbler, whose wife pushes him to return to the Arctic. About one-third of the book is devoted to Lady Franklin's efforts to launch searches for her husband and his crew, including an almost seance-by-seance account of her attempts to use the paranormal for that purpose. This is really misplaced in the telling of this story and detracts both from her determined legacy and from the Franklin history overall.

This book needed a better editor. Part one: Franklin. Why is this guy significant, what are his contributions to geography and science, what led to the loss of two ships and 129 men? Part two: various significant attempts to find Franklin and his party. Part three: The actual search and actual discovery. Especially for the audiobook, where the listener may not have ready access to a map of the area, the regular references to islands in the Arctic and their relation to each other is confusing.

Lastly, the author is at his worst when attempting to use metaphors, some of them mixed. The account is solid, if not cumbersome. Forget the attempts at clever phraseology and tighten up the story.

I'm an "explorer" story nut. I've loved "Endurance", "South", "The Man Who Ate His Boots"; you name it: I'm THERE!
So I was grievously disappointed to come across a story that could have been: Men Plan, The Arctic Laughs.
Expect a LOT of jumping around in time, a lot of things like the man one psychic was married to; the hiking trip that the man who lent Louis the Inuit books went on; the grand search to own scuba gear one diver went on, etc. etc. People, and there are so many people in this weaving of two stories, are mentioned, are given much information on, and are never mentioned again. It really, really took away from the story.
When Watson does manage to reel himself in, this is a 4-Star story, complete with intrepid explorers, loyal friends, bumbling and dismissive Admirals, a determined/obsessed wife, psychics, archaeologists, historians, and divers going for the "money shot". It tracks Inuit oral traditions, and the one Inuit man who made it his mission to get those stories, cross-exam and cross-reference them. And the end, the discovery of the vessels is exciting as it's all so new. It's like "The Man Who Ate His Boots" with a tremendously glorious epilogue.
Was it worth the credit? Maybe, 'cause I really like stories like this. But did I hang on every single word?
Not quite...

This book would be great if it was 30% shorter.

I have long been interested in the Franklin Expedition. When I started this book I was afraid that the book would focus more on the modern search for the wrecks and gloss over the actual expedition itself. I could not have been more wrong. The part on Franklin and his expedition is great, and highly detailed. Little notes, like the fact a copy of Nicholas Nickleby was packed, are amusing.

Sadly, the author's keen eye for detail rapidly becomes tiresome. The long digression into the working conditions at the factory that made the expeditions tinned meat could have been skipped, and although the in depth description of Victorian era canning techniques may have been somewhat relevant, about that point I began to feel like the author was wasting my time. Then things go from bad to worse. When we get to the search for Franklin it becomes a confusing mish mash of who went where, and what cairn was built by whom, and where and when. I found myself needing a map to keep track of things; but to be fair, that sort of problem often comes with the audiobook format.

At this point though there is a long, long, long digression into the story of an Inuit who claimed that the Franklin Expedition survivors were massacred. The digression focuses far less on if the massacre actually happened (it didn't) than on the fact that the guy drank a lot and White people didn't want to believe him because they were racist, but some did, but others didn't because they were racist. We also go through Lady Franklin's fight with the Admiralty, which is deservedly a huge part of the story. Even so, by the time I got told that she switched from wearing mourning clothes to wearing green and other bright colors... well then I started skipping ahead.

When we get to modern day, this starts to sound like the papers I used to write in college, where I was trying to fit in everything I discovered while doing research, without regard to if it was remotely relevant or not, just to show that I had researched it. We are 'treated" to long digressions into why and how the Inuit practice female infanticide. This gem came after a long piece on the traditional Inuit way of life, which marked a return to the perpetual refrain of "The bad white people didn't listen to the Inuit because they were racist." (Yes, this is no doubt completely true; but we kind of caught on to that the first 79 times you told us.) Then we get a long and fairly pointless digression into "Eskimo Numbers", the exact size and cost of the prefabricated housing the Canadian Government provided for the Inuit in the 50s and 60s, and the story of how a (completely unrelated, as far as I could tell) anthropologist got some Inuit to sell him their amulet pouches in exchange for things like sewing needles. (Apparently this ranks up there with the Burning of the Library of Alexandria on the authors list of "Great Crimes Against Humanity".) There was a bit about an Inuit historian who thinks he was grabbed by an evil spirit as a child and almost dragged out of his family's igloo... or maybe it was a tent, the story varied. At this point we were so far from the stated subject of the book I felt like I needed binoculars to see it. In a desperate hope of actually getting back to the Franklin expedition... (you know... that thing I bought the book to learn about) I skipped ahead again, only to land in a long part that apparently dealt with the Canadian Government's attempts during the 50s and 60s to send Inuit kids to boarding school, ( a lot of them died, mostly from TB but some from suicide). Then I skipped some more to find out ALL about the file that the author got (digitally) about a Canadian expedition that was at least proposed in 1969... but to be honest I skipped the rest of that chapter after a discussion about how notes on the file had been made with a felt tipped pen. I finally gave up when discussion of underwater archaeology turned into a long digression about the childhood of Canada's first professional underwater archaeologist, who apparently grew up in Poland during WW2, and then was taken (by his brother in law) to live in the South of France, where he met some French navy divers.... and at that point I just gave up. Was this guy being paid by the word?

(Spoiler alert. Lead poisoning didn't kill the expedition members, and they were starving so badly that they engaged in cannibalism at the end. Both wrecks were found, and Parks Canada has some neat videos of them. At least some of the men made it to the North American mainland. Apparently the last survivors were Capt. Crozier and assistant surgeon Alexander MacDonald, who might have been seen in the Baker Lake area, 250 miles inland, but they never made it home.)

The only thing that made this book bearable for so long (and at over 12 hours it is a LONG book) was the top flight performance of Malcolm Hillgartner as narrator. Not only does he have a magnificent voice, he really knows his craft. His style kept me interested when the author was doing his level best to bore me to death. He is a first class narrator and I will look for other books that are narrated by him in the future.

Rambly and unfocused, seems like the author was really reaching to fill the pages.

Great story of generations of explorers

Overall I enjoyed this audio book. It was well researched and well read. There were a few parts that jumped around with back stories, but they fit where the author put them even if they did get a bit confusing at times. The only complaint I have is that in the very end the author pushes global warming heavily. It politicized what had been a great work.

I listened to this immediately after hearing Dan Simmons’s The Terror. I had not realized The Terror was based on actual events. When I realized that, I wanted to learn more. Ice Ghosts proved to be interesting, informative and thought provoking about Terror, Erebus, their captains and crew, the 170 year search for their remains, as well as Inuit culture and the effects of climate change on the Arctic. I highly recommend both The Terror and Ice Ghosts. Other reviewers were critical of Malcolm Hillgartner’s narration of Ice Ghosts. I completely disagree. I found him to be a skilled narrator who added greatly to my enjoyment of the material.

Not for Franklin first-timers

If you already know a considerable amount about the Franklin expedition, you may enjoy this extremely detailed look at all of the people and their circumstances who became engaged in the search for the missing party. I found it a bit of a slog though it contained some interesting history I wasn't familiar with.

Pretty good, though a bit dry in places.

Ice Ghosts ended well and had many interesting details. I felt that some backgrounds delving into people related to the ships or exploration went a bit deep and could have been shortened. The narrator did a great job. Overall it was worth a listen for anyone interested in the subject.

There are many like this, featuring this expedition and others . This isn’t a standout performance, but it’s solid. A good mix of history and present day efforts, this informs well. Especially good was the treatment and acknowledgement of Native peoples.

I knew nothing about the people and events in this book. it delighted me. If you enjoy learning about still unconquered worlds here on earth, I think you'll like this too.