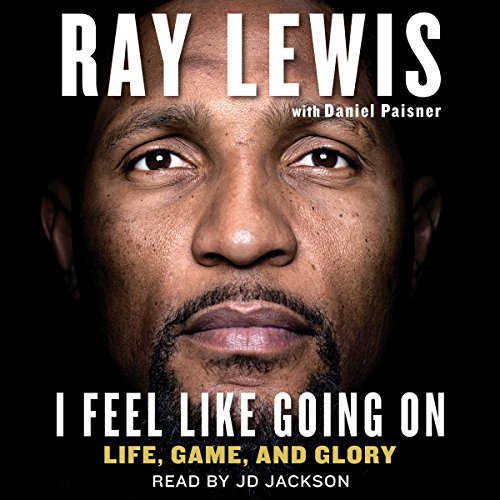 Ray Lewis, legendary Baltimore Ravens linebacker and one of the greatest defensive players of his generation, holds nothing back on the state of football as well as his troubled childhood, his rise to athletic greatness, the storm that threatened to ruin his NFL career, and the devastating injury that nearly cost him a final moment of glory.

A lot of folks, they know my game, but they don't know my deal. This audiobook right here, it tells the story of my 17-year NFL career. It tells of my two Super Bowls, the mark I was blessed to be able to make on the game, on the city of Baltimore. But it also tells the story of how I grew up - abandoned by my no-account father, raised with my siblings by our God-fearing, hardworking single mother. It tells how I sometimes struggled off the field. It tells of the anguish and controversy that found me away from the game.

Mostly it tells how heartbreak can sometimes lift you to greatness and glory - if you find a way to put your focus on faith and faith in your focus.

When I left the game, confetti raining down on my teammates and me after winning the Super Bowl, I made a promise to myself to show how the game is really played at the highest level. That's what you'll find in this audio - a raw, honest look at the business of football and a look behind the scenes at some of the most torturous aspects of the game. The grind of the NFL - that's what shines through.

My deal? That grind is a given. Every player who wears an NFL uniform has to slog through the same battles just to get to the league. But it's how you prepare for those battles that defines you - and here I hope to show how an unwavering trust in God and an unbreakable sense of purpose can lift you from tragedy to triumph. From strength to strength, man - that's the deal.

very good and useful, learned a lot about a great man and competitor, a little political at the end but understandable for the time that he wrote it in. overall very good book

What made the experience of listening to I Feel Like Going On the most enjoyable?

the story, narrator and the pace of the book

I couldn’t stop listening to this audiobook. This work of truth represents power, character and leadership. It was an absolute honor for Mr. Ray Lewis to share his story. I am thankful be on the receiving end of the revelation of self love, discovering leadership potential and Kingdom Keys.

I've been a Ray Lewis fan for a long time. I knew his story had controversy, but also triumph. I appreciated the insight into many moments of his life. Keep going Ray.

even though Ray didn't narrate you feel every word. Such an amazing read all the way through. will help put life in you.

FANTASTIC! I couldn’t put it down

I read this entire book in one day. It is definitely a page turner!! I LOVED IT!

I’m not into football at all, I don’t even have a favorite team or understand what any of the plays mean BUT I learned about Ray Lewis from my love of motivational speakers. I saw one of his speeches on YouTube and it led me to another which revealed he had a book. I enjoyed the book very much however I did get lost in the middle, as it was way too much football talk, it became confusing. Once it picked back up to an actual story, it was great! The narrator is phenomenal as well.

Amazing book. He did his thing on the field & in this book. Ray is the man

An interesting story well told. Great insight into Ray Lewis himself and into what it takes to be a pro athlete at the highest level. A case study in how to overcome adversity.