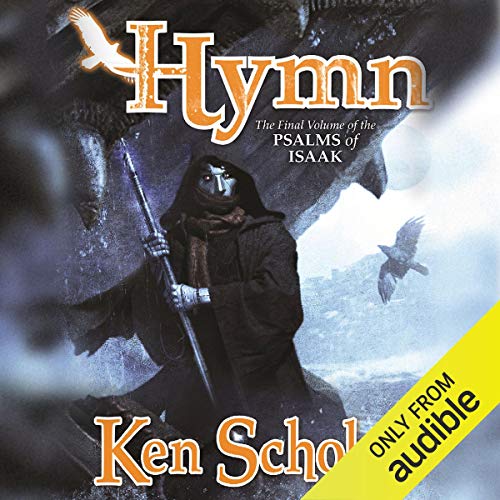 Ken Scholes completes his five-book epic that began with his acclaimed first novel Lamentation. The battle for control of The Named Lands has captivated listeners as they have learned, alongside the characters, the true nature of world called Lasthome.

Now the struggle between the Andro-Francine Order of the Named Lands and the Y’Zirite Empire has reached a terrible turning point. Believing that his son is dead, Rudolfo has pretended to join with the triumphant Y’zirite forces—but his plan is to destroy them all with a poison that is targeted only to the enemy.

In Y’Zir, Rudolfo’s wife, Jin Li Tam, is fighting a war with her own father, which will bring that Empire to ruin.

And on the Moon, Neb, revealed as one of the Younger Gods, takes the power of the Last Home Temple for his own.

The Psalms of Isaak

it was a very good wrap up if the story, I loved how it all came together in the end. very well put together story I have enjoyed since the first book.

The final volume in the psalms of isaak is a solid fantasy that’s definitely worth listening to if you’ve gone through the first ones in the series. That said, it loses some of the urgency and mystery of the first two books. The performances are good overall and make for an enjoyable experience - great casting.

Would you consider the audio edition of Hymn to be better than the print version?

I am not sure I completely enjoyed the mix of voices narrating the audiobook. The talent was great. The performance was great. But, as is to be expected, sometimes the first person voice of a character is done dramatically different than others. Rudolpho and Isaak are two characters that were notably voiced differently by the various narrators. I think this is one audiobook where the print version may be better.

The story had a satisfying conclusion. Basically, the whole book wraps up all of the loose ends set up in the earlier books and packages them neatly. It's a complicated storyline. And, I am usually driving or doing something else when listening to a book. So, here again, it may be better to read this in print than listen to it. (I read the first 4)

I also like that Ken has done some terrific world building. His imagination in this respect is to be commended. It is not a copy of any other world. It's original and full of depth. And, without spoiling anything, he shows the reader the curve of the world (so to say) and indicates that there is more depth to be explored. This is done particularly well and again in a tidy fashion.

Having become somewhat acquainted with Ken Scholes over the course of this series, I can see more and more of his own character written into the struggles of the characters in his books. He has every right to be cynical and heavy-handed in expressing his opinions through his writing. But, the fact that he shows a gentleness and restraint further indicates that Ken is a decent person as well as a talented writer.

I've probably heard most if not all of the individual narrators in different audiobooks. Some are surely better than others. They're all excellent performances. However, the voice of Marta, just got Isaak all wrong. It was inconsistent with the other narrators' depiction and inconsistent with Isaak's persona. (sorry)

No. It's too much to take in and far too long to imagine listening to it in one sitting.

I don't think it's unkind to say that Ken dreamt up a world and storyline that was far too large for 5 books. You can feel the rushed pace in parts as the ends are tied off in places...though the book is fairly long. I am immensely satisfied, though, to have been given the pleasure of entering this world and experiencing it through the eyes of Ken's characters. I think some of his creations are remarkably unique and mysterious. Isaak has become a remarkably well-thought-out being and the character I will miss the most now that the series is over. (or is it?)