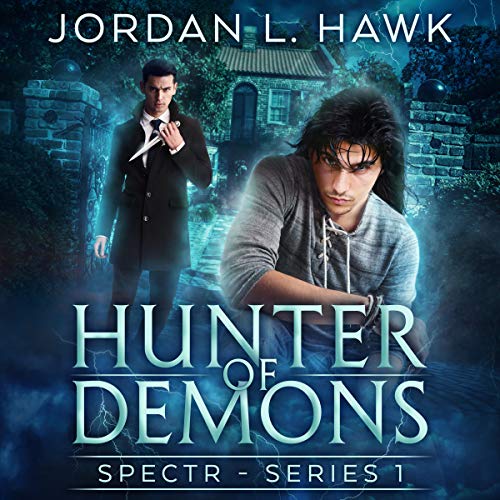 Unregistered paranormal Caleb Jansen only wants a normal life. But when a demon murders his brother, Caleb knows he has to avenge Ben's death, no matter what the cost. Unfortunately, his only allies belong to an extremist group who would kill Caleb if they found out about his talent.

Gray is a wandering spirit, summoned to hunt and destroy demons by drinking their blood. This hunt goes horribly wrong, and for the first time in his existence Gray is trapped in a living, human body. Caleb's body - and Caleb is still in it.

Hotshot federal agent John Starkweather thinks he's seen it all. But when he's called to exorcise Caleb, he finds a creature which isn't supposed to exist outside of stories. For Gray is a drakul: a vampire. Having spent his life avoiding the government as an unregistered 'mal, Caleb can't let himself trust a federal exorcist, no matter how sexy. And he certainly isn't going to give into the heat growing between them and sleep with Starkweather.

Can Starkweather win Caleb's trust and convince him he isn't the enemy? Can Caleb keep Gray under control, as the drakul experiences the temptation of a living body for the first time? Because if he fails and Gray gives in to bloodlust, Starkweather will have no choice but to kill them both.

I have owned the first SPECTR SERIES for ages, but when I came across it on Audible Escape, I felt it was time. So much happens in such a short amount of time that I have listened and read book 1 twice, and am even listening to it while I write this review.

Agent Starkweather (John) and Caleb get off to a rocky start. With an entity possessing Caleb's brother's dead body, then doing a body jump into his when a mission by zealots to rid the dead body of the entity is fubared.

Now Caleb finds he is alive, when he died, orrr almost died, or died and then was saved, or something. He is all confused, and scared and ticked off that now thanks to SPECTR not doing its job, his brother's corpse was possessed, he has no clue what happened to his sister inlaw, he is packing around a demon/ not demon called Grey, and now he will be registered as a Mal with SPECTR. To make it all worse, Grey wants to sniff and hunt down another demon like some bloodhound and EAT IT!😱

This first book is so fast paced, you need to strap in and grab the " OH SH!T!!! " handle. The characters are great, and snarky in just the right way.

I am looking forward to the rest of the series.

I really love Jordan L Hawk, and am saddened to write a less than stellar review of any of her books, but I can't call this one great.
Maybe it's the narrators interpretation, but Caleb comes across as a whiny ass. I like Grey and John, but really Caleb is irritating, and the series revolves around him (and Grey inside him). I will be continuing with the series, since I find JLH's twist on a future with paranormal as a given part of society, a great story line.

Since I didn't care for the narrator, at all, this has probably colored my overall impression of the story. He sounded like an overzealous teacher reading to a middle-school English class. With reference to the story, I found the prose rather simplistic and somewhat clumsy, and the characters bordering on unlikable. This is the first and last of this series for me.

Hunter of Demons was not really a complete story, it was more of a good beginning of something much larger. Where we first meet John and Caleb and are introduced to the world of vampires, lycans and spectr and let’s not forget Gray. The spirit who hunts and kills demons.

When Caleb’s brother Ben is murdered he wants revenge and to kill the demon that took his brother from him. So he joins forces with his sister-in-law and his brother’s friends and go hunting. Only something goes terribly wrong, in the sense of almost dying kind of wrong. And the only reason why he didn’t was that he seemed to pick up a body hitch-hiker on his way down; the spirit Gray.

Enter agent John Starkweather. He’s tasked not only to exorcise Gray from Caleb’s body. He was also ultimately responsible for investigating Ben’s murder. Only someone on the inside is working against him making evidence disappear and may even be responsible for unleashing the new terror leaving dead bodies in its wake.

As this was such a short story there wasn’t much of a character development or forming of deep connections. I don’t mind that though, we are still in the “let’s get to know each other” stage of our relationship. Getting to know this strange world of paranormals, the rules to live by and the people in it. There’s a lot to learn and we’ve only just begun to scratch the surface – at least that’s been my experience with Jordan L. Hawk books.

Talk about narrating with enthusiasm! From the start I was a fan of Brad Langer’s narration. I mean he varied his tone, intensity and volume depending on what was going on in the story. It was spot on and never overdone. He also understood the essence of the characters and made the listener know them too. If this is a hint of what the narration will be for the rest of the series, I know I’m in for a really good time.

I really want to know more about these guys so I’m jumping right into the next book.

Ummm, not sure what I just read. It did have a lot of action, paranormal, and urban fantasy aspects to the story; however, I am still unsure how the male/male romance plays into the story. There just wasn't enough meat for me to really get into the storyline beside the fact that it is normal people fighting against paranormal people.

This specific video review will be included in the October 2018 wrap-up.

Get a new narrator. The volume of his voice wad all over the place. I had to constantly adjust my volume. Very distracting. And the whispers were not dramatic. They were stupid. The book itself was ok. Too many words wasted. Excessive descriptions, just immature and crappy.

I really could not get into this book. I really like paranormal mm romance. This, though. Too confusing and I really didn't like the characters not did the narration entice me enough to continue.

Ok neither writing nor narrator is great IMO

The narrator is too dramatic. Sometimes less emphasis is better than more.

Writing is a bit basic, a lot of adverbs when more or less could be used to describe actions in my opinion, but as an amateur writer it sticks out. Regular readers might not be frustrated.

I do plan on continue to listen to more of his books, sometimes writers change their style and the ideas which initially attracted me to these books might outweigh the parts I’m not thrilled with, so I guess I’ll see.

I liked the book when I read it and decided to check out the audio. The narration is worst I've heard since I got into audiobooks. It really does not do the book any favors. It's the first narration I've heard that deadened the story rather than bring it to life. I suggest you give the written book a chance if you didn't like it in the audio version.

good but not great

the sound quality got me on this one. loud to soft and back again ...