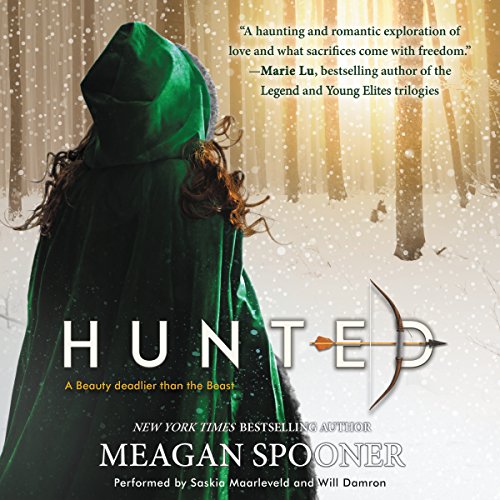 Beauty knows the Beast's forest in her bones - and in her blood. After all, her father is the only hunter who's ever come close to discovering its secrets. So when her father loses his fortune and moves Yeva and her sisters out of their comfortable home among the aristocracy and back to the outskirts of town, Yeva is secretly relieved. Out in the wilderness, there's no pressure to make idle chatter with vapid baronessas or to submit to marrying a wealthy gentleman. But Yeva's father's misfortune may have cost him his mind, and when he goes missing in the woods, Yeva sets her sights on one prey: the creature he'd been obsessively tracking just before his disappearance. The Beast.

Deaf to her sisters' protests, Yeva hunts this strange creature back into his own territory - a cursed valley, a ruined castle, and a world of magical creatures that Yeva's only heard about in fairy tales. A world that can bring her ruin - or salvation. Who will survive: the Beauty or the Beast?

Slow but imaginative, a little unsatisfying

It took a long time to get started, but when it finally did, the middle of the story was interesting enough. I definitely enjoyed the part where they finally started meeting the other mythical creatures, but I wish the author would have spent more time fleshing them out. We barely get glimpses of these interesting characters (we see them each briefly one time in the middle of the book, and once at the end), but the author spent probably half of the story developing the dull human supporting characters, who I just couldn't bring myself to care about. The ending seemed to be building up to some sort of epic fight scene or test or something, but then it just...didn't. I suppose I forgot this was just a fairytale retelling and not epic fantasy. I didn't feel like the author really explained why all of the beast (he refers to himself as "we" throughout the story, so I don't think it's a spoiler to say that he has more than one nature inside of him) was cursed, or exactly how the resolution happened. It just...happened. It seemed like the author was running out of time to finish the book so she just slapped something on there and called it done.

Overall I thought it was a passable diversion, it just could have been so much more interesting if some things were done better. If you like basic fairytale retellings, this one was fine. Not great, but fine. I don't really think it was worth a whole audible credit though.

45 minutes in and I can't seem to catch. Sad really, as I wanted to love this story.

I can't begin to describe how mundane this book was to listen to. It's a re-telling of beauty and the beast and it is SO boring. I would skip honestly.

The story fell short for me. I found myself hooked in the beginning but the romance felt dry in the end. I also feel the male narrator did amazing while the female voice was just ok.

Megan Spooner is a very talented storyteller. I enjoyed this version of a familiar tale and recommend reading it. You will be pleased with the twists.

I re-listened to this one recently, and I’m very glad I did. I love the tone, the Slavic setting, and how it feels like a fireside bedtime story; it’s surprisingly meta for being YA fantasy. In that regard, I [mostly] enjoyed the meandering pace...as someone else noted, it is a slow walk through the frozen wood, with darkness and wonder creeping in around the edges. The story and work as a whole seems to almost stumble upon itself in the last hour. It seems almost like an accident after so much searching, and I’d argue that it’s sort of the point. I can’t tell if I love or hate the timing/pacing/execution of that, but the underlying themes and resolution spoke to me enough that it didn’t seem to matter to me in the end. Could it have all been tighter? Sure. Still lovely in its apparent simplicity, which, true to one of its messages, is actually complexity.

Drawn out and odd

If you are looking for a whole lot of philosophical discussion with a little bit of romance, then this is the book for you. If, like me, you were hoping for high entertainment value, another unique spin on the Beauty and the Beast story, and time well spent listening, I suggest looking for another book.

The narrators were fine. I actually really enjoyed Saskia Maarleveld's performance in two other stories, Beauty and the Clockwork Beast and My Fair Gentleman. I was excited at first finding out she was a co-narrator on this book. Her performance was enjoyable to listen to, as was Will Damron's. The story itself, not so much.

It started out drawn out and slow, continued drawn out and slow, and ended disappointingly. I was waiting for that wonderful climax when Beauty and Beast finally get together and all is well, but the way it was done in this story came across as anti-climactic to me. You can listen and judge for yourself, as I chose to, but I am finding that I regret it very much. Definitely want to refund that credit.

The first 30-45 minutes I could have stopped and not gone back. Hour 2, I'm interested, hour 4 I'm obsessed. This is a great "beauty and the beast" retelling that is both magical and realistic. Perhaps the best part is the moral of its story. If you enjoy fantasy, dark love, and folklore, you will enjoy this book.

Loved it. Had to listen to it several times. I enjoyed it every time. will listen again and again.