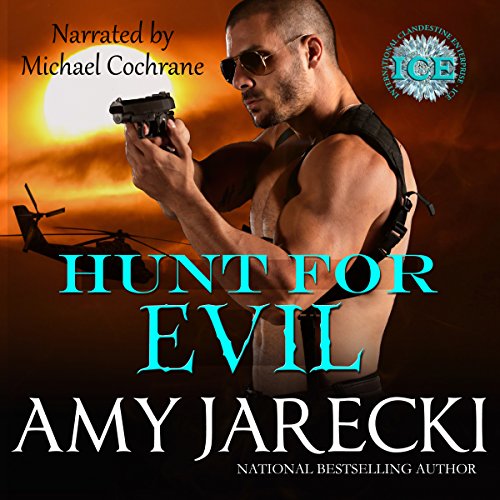 Meeting her will change his life...and she has no idea how much she needs the SEAL to change hers.

When Navy SEAL Commander Logan Rodgers winds up on a botched mission in the Gulf of Oman, his quick action in saving MI6 asset, Olivia Hamilton, brings him to the attention of the international espionage arena.

Recruited by the mysterious and elite International Clandestine Enterprise (ICE), Logan faces Olivia again, but this time they're on the same team. Sparks fly as the two compete in a clash between skill and keen intellect, until a French girl is kidnapped by a suspected terrorist.

Posing a married couple, steam erupts between the pair while Logan and Olivia dive deeper into an ISIS kidnapping ring. But when Olivia becomes the kidnapper's next victim, she enters a madman's hell. And as Logan races against time to save her, one thing ravages his soul. If he fails, the woman he loves will be lost to him forever.

Michael Cochrane was the best thing about this book for me. He did a great job on both male and female voices. I obviously didn’t feel the same way the other reviewers did about the story. I did find much of it exciting and I did find Logan lovable however Olivia spoiled it for me. She was just so irritating and miserable throughout the entire story and treated Logan so poorly all the time that I just couldn’t warm up to her in the least. A strong heroine is one thing but she can still be caring and considerate. Olivia’s selfishness and obsession with revenge just took over the story and spoiled it in my opinion. I realize she was suffering from PTSD and thus did deserve some leeway, however I don’t think that can excuse her attitude throughout the entire book. I won’t be continuing this series and feel as though I wasted my credit on this one.

Amy Jarecki is one of my fave authors and I read/ listen to all her Highlander books. Ms. Jarecki did an amazing job with this first contemporary romantic suspense book, setting up a new world of intrigue, covert operations and war against evil.
Logan and Olivia are so different, the sparks fly from the beginning, the story is fast paced, nail biting moments and some very sad ones too.
A great choice for narrator, Mr. Cochrane does the story justice with the voice variations for the many characters, well-displayed emotions and passion.
I recommend with 5 stars.
I am looking forward to book 2.

This one was so exciting for me. The Navy Seals are close to my heart as I have a family member who was on a very important mission and it was a success. So glad he made it home. Can’t wait for the next book!

Hunt for Evil marks Amy Jarecki’s contemporary militaristic romantic suspense debut. I’m a huge fan of her historical romances and enjoy romantic suspense, so it was a given that I’d be on board to read Hunt for Evil, set in an intriguing international world of covert operations in the war against evil terrorists. This is the story of Navy SEAL Commander Logan Rodgers and MI6 asset Olivia Hamilton.

The story opens literally with a bang as Logan is placing an explosive device on a ship when he receives orders to abandon the mission. His attempt to stop the bomb’s detonation is not successful as the device is defective - cementing the countdown and the ultimate destruction of the ship. With no other viable alternatives open to him, Logan vows to save the M16 asset on board the ship at his own peril.

Olivia can finally see the light at the end of the tunnel to a long, very difficult mission. Soon, her targets will be behind bars making the hell that she’s gone through the past two years, worth it. Needless to say, she’s not happy to learn that all of her efforts have been for naught because the Americans have botched her mission.

As time passes, Olivia realizes that the muck-up to her mission was not Logan’s fault. AND he did save her life. So… when she is recruited by the elite and mysterious Iceland-based ICE spy agency, aka International Clandestine Enterprise, she recommends that they also recruit Logan. Logan’s and Olivia’s first ICE mission targets ISIS, human trafficking and illegal weapon deals and involves them closely masquerading as man and wife.

These two had an immediate attraction but Olivia fought it tooth and nail. I rather liked Logan. He’s alpha to the core expecting his orders to be followed immediately and to the letter. I enjoyed visiting his western spread and his meaning-well attempts to bring Olivia out of the PTSD she was suffering from being undercover so long. (She ably covers up her problems with ICE’s doctors as she’s desperate to take down the terrorists who took out her parents.) Try as I might, I just never warmed up to Olivia. I could totally understand her first aversion to him. But, she maintained a bad attitude and mercilessly tortured and teased Logan throughout much of the story and I could not get past that. To say the least, she was far from being a team player. Therefore, while the story was well-plotted, my inability to like the heroine, despite my best efforts, thwarted my full enjoyment of the story. Please know that I’m not in the majority with this opinion regarding Olivia.

Following please find a few of my favorite quotes from Hunt for Evil:

Her heart nearly stopped when a hand slid over her mouth and another disarmed her. “I’m Commander Rodgers from the USS Washington, and you’re coming with me now,” an American growled in her ear.
---
I can handle you any night, anytime, anywhere.
---
Working undercover ate a person from the inside out, and it had cost Olivia more than she wanted to admit.

Michael F. Cochrane is the able narrator for Hunt for Evil. This marks the first time I’ve ever listened to any of his works. His voice is clear, strong and easy to understand. He does a good job assigning a unique voice to each character. Almost all of his voices sounded realistic to me with a few exceptions. Furthermore, he consistently differentiated between the various personalities. To my American ears, he aced the multiple accents herein, including British, German, Scandinavian and American. The end product is polished and professional.

This story is fast-paced and action-packed. It lured me in right away. The tale bogged down a few times mid-way, but picked up quickly with nary a dull moment from there. The slowness I perceived could very well have been because of my failure to connect with Olivia. It’s difficult when you dislike one of the main characters. That said, there’s a wonderful array of international supporting characters. Despite having issues connecting with the heroine in this read, I look forward to listening to Amy’s succeeding ICE adventure, Body Shot. I can’t wait to see which of the ICE characters will be featured next!

Such a Compelling Listen -- Over the Top!

I came to know Amy Jarecki’s writing through her historical romances and fell in love. Her historicals are loaded with action, intrigue, danger, suspense, and passion. I’m passionate about her writing. But the most wonderful thing is, she’s able to write just as mean a contemporary romantic suspense. Boy, does she get my adrenalin pumping!

With a flip of the switch, language changes I’m in the here and now, same great gripping emotional conflicts, just in a world as dangerous as times of old. I loved the way she uses the here and now, the fears we have today in this story --ISIS, human trafficking, selling weapons illegally, etc. She makes it so real. Amy takes us into the stench of evil, you'll smell it and feel it. She’s certainly done her homework.

I enjoyed the narrator. I hadn’t listened to anything of his before. He handles the accents admirably. I liked his Scandinavian accent a lot. It took me back to my great aunts and uncles. He does American, British and German in this story as well. There is one voice I swear sounded just like GEICO, the lizard from the insurance company. She was the Director of Administration for ICE. He had me snickering. She was something of a lizard in personality, too!

Olivia is a dynamo, she’s revenge on her mind. After joining ICE, she suggests to Garth, the head director, that they recruit Logan Rogers, someone who had saved her life in a very botched mission.

Olivia and Logan create sparks just being in the same. Logan is hooked (but wary), but Olivia doesn’t want to get close to anyone. As the story heats up, so does their relationship. But it’s an on again and off again thing with Olivia. They have a mission they need to accomplish, they both need to focus. Olivia is determined to take down the man who has plagued her nights for years with nightmares.

If you like the thrill of the chase, with danger, injury and possible death, (gads!) you’ll be absolutely pulled into Jarecki’s riveting and mind-boggling series. I had already read book 2 of this series. I just had to catch book 1, Hunt for Evil.

If you could sum up Hunt for Evil in three words, what would they be?

What other book might you compare Hunt for Evil to and why?

Have you listened to any of Michael F Cochrane’s other performances before? How does this one compare?

Never listened to this narrator before. He did a great job with the different personalities, making each have their own unique voice.

Yes but unfortunately life gets in the way.

I enjoyed this story, loved Logan right away but never did really warm up to Olivia. She was pretty mean to Logan throughout the story which turned me off to her character. However, readers who like this type of character will love her. This author did a great job with the story and the characters. Me not liking Olivia is a personal preference in characters.

Her past almost derails her future

It took a bit for me to get into the story, but once it got going, it was hard to put down. The attraction between Olivia and Logan was fulfilling. His tenderness was endearing, and Olivia finally coming to terms with her own past to see what was right in front of her made the ending tug at my heart. It was a bumpy ride for this couple, and I enjoyed it. I look forward to more in this series and hope to see glimpses of Olivia and Logan.

I received a copy of this audiobook as a gift.