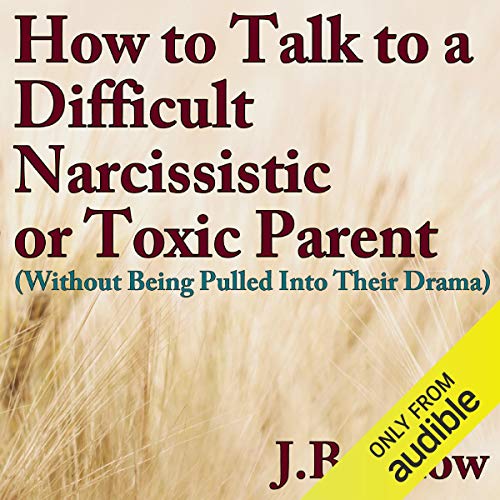 How to Talk to a Difficult, Narcissistic, or Toxic Parent (Without Being Pulled into Their Drama)

If you have downloaded this audiobook, it is likely that you are struggling to cope with a parent who is difficult. I have dealt with my share of difficult people, as well as the difficult people who my readers and listeners often seek my advice on. I hope that the knowledge that we have collected over the past four decades will help you with the difficult person in your life, and will hopefully encourage the difficult relationship toward some sort of sanity and peace.

Difficult parents and difficult people are everywhere. I estimate that there are far more than 30 percent of the population who have personality disorders and mental illness. Those who are actively seeking treatment are counted on the statistics by NIMH (the National Institute of Mental Health), but the numbers seem low in my personal opinion. Many of us know a large number of people who have mental illness problems or personality trait issues who were never diagnosed.

Many of us come from families full of people who are exhibiting the various symptoms of personality disorders. Whether or not your family member has a "label" for their condition, they have learned, acquired or grown up with a dysfunctional way of relating to other people.

Ce que les auditeurs disent de How to Talk to a Difficult, Narcissistic, or Toxic Parent (Without Being Pulled into Their Drama)

Was this just copy/pasted/transcribed from the internet and then recorded by a robot? Seriously, this provides zero useful information and is like a basic overview of personality disorders. Plus the 30 min length comprises 9 min of credits and blank space at the end. This audible content is as close to fraud as it gets. Who’s reviewing content for audible? Nobody it seems.

Disappointed by lack of depth in content. Wordy...could have said the core message in three minutes. Complete waste of money.

I expected a more entailed help book and although well written, the book was short.

This audio is to the point. I can easily re-listen whenever I forget how to deal with my mom. I feel validated which means I can respond with compassion for myself first and then compassion for her instead of guilt, anger and frustration. It's been a long journey to realize the strange lies and torment a narc can provide to their children. I've had to feel worthy enough to hold my boundaries despite family anger toward me. Without the number one scapegoat, their lives were effected.

Did the content come from a workplace awareness poster? It is mostly a list of characteristics that any 5th grader could point out.

The person speaking is very monotone. There is no expression. She is not telling you how to speak to or deal with a narcissistic parent. She is telling you the traits and what you may expect. Not a good book.

Very helpful, I plan to listen to it until I have it memorized...maybe 6 times!

i didnt realize how short it is!!!!! good info though just qll given quickly and. briefly. i feel o still dont k ow where to start

This book is Very helpful ! The author hits the nail on the head on difficult people!
Thanks!

I can actually see how the instruction are going to work out perfect for me!