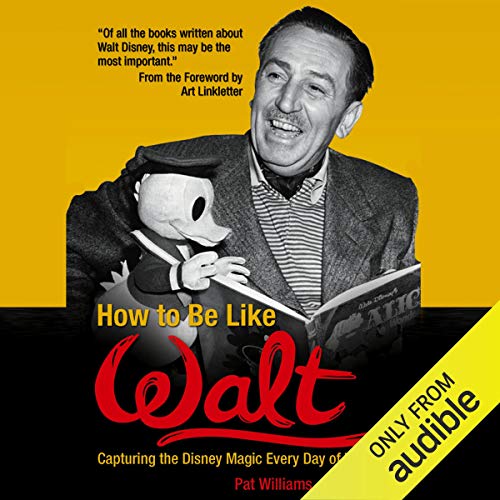 An inspiring biography of one of the most influential and beloved figures of the 21st century, based on more than 1,000 interviews.

How to Be Like is a "character biography" series: biographies that also draw out important lessons from the life of their subjects. In this new book - by far the most exhaustive in the series - Pat Williams tackles one of the most influential people in recent history.

While many recent biographies of Walt Disney have reveled in the negative, this audiobook takes an honest but positive look at the man behind the myth. For the first time, the book pulls together all the various strands of Disney's life into one straightforward, easy-to-listen-to tale of imagination, perseverance, and optimism. Far from a preachy or oppressive tome, this audiobook scrapes away the minutiae to capture the true magic of a brilliant maverick.

"How to Be Like Walt is a fitting tribute to Walt's memory and an important contribution to the Disney legacy . . . Now more than ever, we need people with the qualities Walt had: optimism, imagination, creativity, leadership, integrity, courage, boldness, perseverance, commitment to excellence, reverence for the past, hope for tomorrow, and faith in God." Art Linkletter

Ce que les auditeurs disent de How to Be Like Walt

I've always been a Walt Disney enthusiast but I learned and heard so many new stories and history in this book it never got old. It's a great biography relating to Walt Disney's character and mannerisms. I loved hearing the stories of Walt Disney's values and work ethic. The only part I didn't like was the constant talk of religion. I don't mind hearing about Walt's religious views and values, but most of the time it came off as straight up preachy. In one part of the book, there's a whole five minute bible thumping tangent that doesn't even mention Walt Disney. This became repetitive and got old pretty fast. I would have rather heard more stories about Walt's work ethic and stories about the various projects he worked on. Overall I enjoyed the book and thought it was very insightful and informational about the man behind the mouse.

Be warned: It's more of a biography than the "self-help" book it sounds like front he title, but I think that's for the best. In fact, the only parts that I felt dragged, were when Williams feels the need to summarize and reiterate the bullet points of Walt's life. That's when it feels like a self-help book, and cheapens it as a serious biography, in my opinion.

This book has a lot to recommend for both casual readers and more serious studiers of Walt. Pat Williams has talked to many people, and there are tidbits I'd never come across in any other books. Just for that, I'd recommend it.

It's a thoroughly researched book, and while it sometimes feels like it puts Walt up on a pedestal, I'd say that can be expected from the title. Mostly, I just love all the cool anecdotes Williams pulled from former studio employees, friends, and their children.

Christy gives it his all, it's just a bit further into the Casey Kasem school than I enjoy. The book sounds like a really long radio dedication. He also mispronounces some things, like WED Enterprises.

I didn't love that Williams felt the need to insert his own beliefs into the book so much. A Christian, Pat Williams has chosen to indicate all of the places in which Walt's life dovetails with his own spiritual choices. Religion is not something I disagree with, but the connection to Walt feels tenuous, or at LEAST speculative, like Williams is ascribing his own beliefs onto Walt's life.

This is a great learning book on how to be successful. If you are a fan of self-improvement and would like to learn more about success or just like reading about successful people, This is a great book. Especially if you are an artist or a creative person this was a man who had a HUGE vision. The performance was along the lines of other biographys or self improvement. It didn't put me to sleep but it wasn't super special either.All that being said, I will definately listen to this again next time with a journal to take notes.

One of the best books I've heard yet!

I didn't know anything about Walt Disney when I started this book. Now I'm an admirer and big fan. This work brought Walt to life for me and I highly recommend it!

The lessons from Walt's life that can be applied to anyone's life.

Have you listened to any of Paul Christy’s other performances before? How does this one compare?

No, this was my first.

No tears, but I have been running it through my mind and discussing it with friends every since.

We all can be dreamers and imagineers!

Solid biography but with an agenda

Pretty standard biography of Walt Disney but built around the gimmick of how to be more like Walt. No real revelations or unusual inclusions.

The author used the opportunity to do some preaching of his Christian faith for some reason. Along the lines of "Walt was like this and that. And you know who else was great? Jesus!" Followed by a sermon. Unnecessary and not what I signed up for.

the story of Walt's life and the anecdotes and research was well put together. the only problem I had with this book was the authors repeated need to highlight anything Walt did positively in his life with his, the authors, personal beliefs in Christianity. Walter Elias Disney was a spiritual man and did not believe in organized religion and the need to go to church to prove you were a good person. he understood that a personal belief is just that, a personal belief. he was a true utopian believing that all Humanity should be able to coexist no matter your race, religion, sexual orientation, Financial class, and so on. you just needed to be a good person with a strong moral conviction and willingness to help others. it is a great book and Walt was a phenomenal man but please keep your views of God away from Walter Disney.

I enjoyed the info on Walt life and some stories I havnt heard about him before in other books. However, I did not expect so much preaching from the author about HIS own opinions about God and relegion. Fine, Walt was a godly man but this went beyond that.

I Liked the Audio book so much that I bought a copy of it in print too.

People ding the voice actor in the reviews, but I think he did a great job. I would have preferred a little more of a pause between chapters (this is a formatting/editor issue) but it was not hard to follow especially if you know ahead of time it can be an issue.

When it comes to content I feel this is one of the better books on Walt out there. It contains stories you don't get anywhere else and it seems to paint the clearest picture of this remarkable man.

I have read several biographies on Walt and this one has a "something more" that is hard to put a finger on let alone define, but it is there all the same.

This book seems to catch the essence of the man and the way he made people feel. It left you feeling like you knew Walt. It touched me deeply to hear people share such candid loving stories and I had a sense of loss at never getting to actually know this man.

I would say that this book is more a biography with life lessons than a self help book, but it could be a more effective self help book because of that. Modern man longs for witnesses. We need role models and Walt is a good one. If we put into practice some of the things that made Walt so incredible it could help us become pretty great too.

Some reviewers that wanted a strait biography disliked the sections at the end of each chapter that discussed the lessons learned and "how to be like Walt" but I think that these sections help give this book it's unique character. Personally I loved them. I thought they summed up the chapter and gave you an overview of the lesson learned without hitting you over the head with it.

Other people who wanted a self help book seemed to think there was not enough help in it and too much biography. Personally, I think the biographical information is precisely what makes it so good at self help. If you go back to just those sections afterwards they are even more powerful.

I highly reccomend this book to even a casual Disney fan. I reccomend the book to people who just like a good biography and I also reccomend it to those trying to get the most out of their business and life.

I loved it and will likely reread it soon.

If you're looking for an optimistic, comprehensive story of Walt's life and work, look no further — this one is your winner. It's a well-written, cheery look back on everything Walt dreamed of, stood for, and achieved in his life. It covers both the highs and the lows, yet always comes back to the positive side of things. In a world full of darkness, I found that to be refreshing. I'm sure that's exactly how Walt would've wanted it written.

It's a very inspirational book and will awaken almost anyone who reads it. It's hard to not want to take action toward one's dreams after hearing of Walt's dogged pursuit of his own.

One small disclaimer on the audiobook, however: the chapter / file titled "chapter 8" repeats a lot of its content. I think someone must have messed up on the production side as there are several stories about Peter Pan and 20,000 leagues under the sea that are repeated verbatim. Other than that blunder, this is a fun book that I'd definitely recommend checking out.

-Brian Sachetta
Author of "Get Out of Your Head"

An awesome book about life lessons we can learn from Walt Disney. I was pleasantly surprised to find traditional Judeo-Christian principles in this book, though anyone can read it and enjoy it. If you want to be a leader, if you have larger than life dreams, or even if you’re in a rough place and want to grow as a person this book is for you.