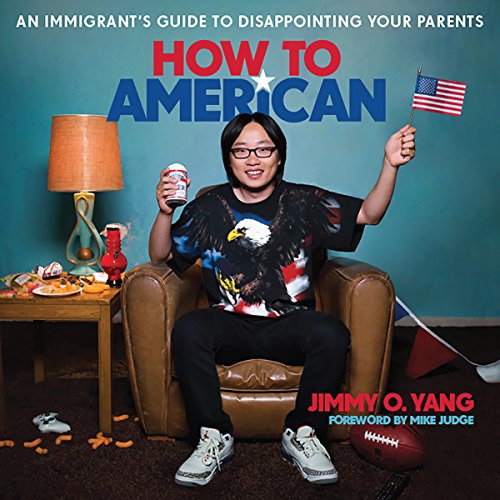 Stand-up comic, actor and fan favorite from the popular HBO series Silicon Valley shares his memoir of growing up as a Chinese immigrant in California and making it in Hollywood.

"I turned down a job in finance to pursue a career in stand-up comedy. My dad thought I was crazy. But I figured it was better to disappoint my parents for a few years than to disappoint myself for the rest of my life. I had to disappoint them in order to pursue what I loved. That was the only way to have my Chinese turnip cake and eat an American apple pie too."

Jimmy O. Yang is a stand-up comedian, film and TV actor and fan favorite as the character Jian Yang from the popular HBO series Silicon Valley. In How to American, he shares his story of growing up as a Chinese immigrant who pursued a Hollywood career against the wishes of his parents: Yang arrived in Los Angeles from Hong Kong at age 13, learned English by watching BET's Rap City for three hours a day, and worked as a strip club DJ while pursuing his comedy career. He chronicles a near deportation episode during a college trip to Tijuana to finally becoming a proud US citizen ten years later. Featuring those and many other hilarious stories while sharing some hard-earned lessons, How to American mocks stereotypes while offering tongue-in-cheek advice on pursuing the American dreams of fame, fortune, and strippers.

"HILARIOUS! Reading this book is like sitting at lunch with your funniest friend whose stories make you laugh until milk comes shooting out your nose. Jimmy O. Yang will teach you how to American like a pro!" (Kevin Kwan, international best-selling author of Crazy Rich Asians)

"It's difficult to imagine how excruciatingly uncomfortable it must be for many immigrants to our unforgiving and provocative culture. Absent the nuances of language and behavior we take for granted, Jimmy O. Yang hilariously chronicles his very personal experience from mute, frightened youth to cultural virtuoso and successful performer." (Dr. Drew Pinsky, media personality, author, board-certified physician)

"Hilarious, heartfelt, and inspiring, How to American captures the Asian-American experience. A must-read for everyone." (Ken Jeong, comedian; actor, The Hangover)

Had to pull over I was laughing so hard

Maybe the best Audible book I have ever listened to. It’s always great having the author of an autobiography read their own work and this narration is pure perfection. I laughed from beginning to end and learned a ton while doing so. Download this ASAP and enjoy

Funny and surprisingly good! But it kept referring to a PDF for pictures. I wish we could see the PDF.

The mindset of Jimmy O. Yang is truly refreshing

Would you listen to How to American again? Why?

i would absolutely listen to this book again. i was thoroughly entertained and mesmerized by Jimmy's positive mindset. His thirst for learning is refreshing and much-needed today.

What other book might you compare How to American to and why?

I would compare this to the amazing The Last Black Unicorn by Tiffany Haddish as it tells the funny stories of how a positive attitude and desire to see the good in others can get you through some hard times.

I didn't realize just how much I was going to enjoy this book until I was in tears from laughing on my way into work.  I listen to audiobooks in my car and this was absolutely hilarious.  So funny (especially the chapter about working with T.J. Miller) that I think people thought I was crazy in my car.

Jimmy O. Yang - better known as Jian Yang on the hit tv-show Silicon Valley came to America as a young child.  He spent his early childhood learning how to speak English watching BET.  And became a stand-up, not for not-so-normal reasons. How To American tells these stories and many others about the life of Jimmy O. Yang so far.

I knew Jian Yang -- aka Jimmy from Silicon Valley.  When I saw that he wrote a book I was on board. I did not know he was a standup comedian (I love all things standup related). I also didn't know pretty much anything about him before reading this.  I'm really glad I took the 6 hours to read this one.  Jimmy is a hilarious and thoughtful writer - who would make me laugh one second talking about how his dad would insult him and in the next moment would make me think deeply about the people around me.

That's the thing about this book and Jimmy in general - they are full of surprises.  Silicon Valley fans will be happy that there are about 3 chapters around the show along with one really funny one about his interaction with T.J. Miller - "I eat the fish". But How To American has so much more in it.  I loved the stories about his early "rap" career along with the stories related to being a strip club DJ.

How To American was so much more than I expected and I'm thrilled.  Jimmy is a fascinating guy and I can't wait to see where his career takes him.

This was a great story and I appreciate Mr. O. Yang's determination and hard work but I was a little put- off and disappointed that the American dream is nothing more than strip clubs, partying, and bikini clad women. The underlying theme of the book is that the American dream means different things to different people but ultimately the opportunities to follow one's dreams is quintessentially American. An entertaining book.

An amazing and beautiful piece

This is probably one of the best audio books I have eget had the pleasure to hear. Jimmy is first off a great author, but his skills as a world class actor and commedian really shine through. It might look like a comedy on the outside, it really isn't. It's a heartfelt story about the life of an immigrant, struggling to come to terms with who and what he is. I greatly recommend this book!

Kevin Hart’s was also good and offered more, but I busted a gut so many times from laughing. And I’ve never seen Silicon Valley.

Of all the Audible books i’ve listened to so far, this one had to be the best. Jimmy Yang did the best narration telling of his upbringings of his developing character and mindset through the influential impacts throughout his life. He had me laughing many times. There’s only one thing that I just felt pulling at one of strings, that there was a lack of appreciation for the hardships that his father had gone through just to get his two sons over here for a better opportunity in higher education and a better future, but of course, it’s HIS narrative. I wish Jimmy could see and understand why Asian parents are so difficult and hard on us and only wish for us to have a stable job rather then to see us struggle the way they had to before. In their eyes it probably felt like it defeated the purpose of them working so hard, but I get it, Jimmy, YOU WENT AGAINST the odds and made your parents proud. Overall, this was a GREAT narrative.

From one immigrant to another: Thank you!

As an immigrant to multiple countries, and the child of an immigrant (although not Chinese or in any way Asian), the big-picture life lessons and understandings really resonated with me. Jimmy eloquently captured the feeling of being an inside-outsider. Or maybe it's an outside-insider. When the Chris Rock-style voice comes on, prepare for a story from the heart of Crazytown (not for everyone). But when Jimmy uses his conversational voice you get the inspiration, the deeper insights, and the real Jimmy who does a lot of crazy sh*t, but seems to have learned from it (just like we all do). It was a fast listen and only embarrassing when you find yourself laughing while walking down the street - maybe it's better to listen at home. :-)

Funny, unconventional and inspirational. This book is a unique look at the story and journey of one individual through life in an attempt to follow his dream to become a comedian and actor in America. Jimmy bares his story in a transparent honesty that introduces you to him, the various individuals he meets on his journey and ultimately his struggles in a way that leaves you laughing out loud, feeling inspired to follow your passion no matter the risks involved, and understanding the ultimate struggle of an immigrant trying to find their place in a new culture. You'll come to love Jimmy, his family, his friends and in the end will come to know a person who you only knew as Jian Yang from silicon valley.