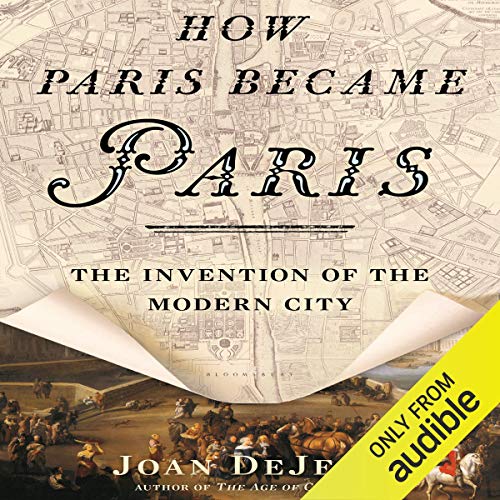 At the start of the seventeenth century, Paris was known for a few monuments, but it had not yet put its brand on urban space. Like many European cities, it was still emerging from its medieval past. But within a century, Paris would be transformed into the modern and mythic city we now know. Most people associate the signature characteristics of Paris with the nineteenth century.

Joan DeJean demonstrates that the Parisian model for urban space was in fact invented two centuries earlier, when the first full design for the French capital was implemented. During this period, Paris saw many changes: It became the first city to tear down its fortifications. A large-scale urban plan was created and executed, with organized streets and boulevards, modern bridges, sidewalks, and public parks. Venues opened for urban entertainment, from opera and ballet to another pastime invented in Paris, recreational shopping.

Parisians enjoyed the earliest street lighting and public transportation, even as theirs became Europe’s first great walking city. A century of planned development made Paris beautiful and exciting.It gave people reasons to be out in public as never before and as nowhere else. It gave Paris its modern identity as a place that people dreamed of seeing. As Joan DeJean shows us in this compelling portrait of a city in transition, by 1700 Paris had become the capital that would transform forever our conception of the city and of urban life.

The book was fairly easy listening, given the topic, but it made regular references to illustrations - to which I didn't have access. I'm going to read the book myself instead.

The text refers to illustrations

For that reason, it's the worst audio book ever! There are apparently lots of maps and historical illustrations included in the printed book. When the narrator says "… as in the illustration…" you're out of luck. If I had known this, I would not have bought it.

Fascinating history, but narrator is unbearable

Bottom line: listen to a sample of this narrator before you buy.

I listened to this in preparation of an upcoming visit to Paris. The history of the city is fascinating and relevant. The author breaks up certain aspects of the city's development (e.g. building the Pont Neuf, development of Paris's fashion dominance) and talks about how each contributed to the Paris we know now--and ultimately, every modern city.

But wow, the narrator is absolutely horrendous. He reads every sentence with so much drama and superiority, you'd think he was actually trying to evoke the ridiculous stereotype of a stuck up Parisian. I am not sure why the narrator insisted on reading like that, because it doesn't sound natural and the text itself doesn't read like that at all.

I was worried because of the reviews.

This book was so intriguing. Loved it all. The pictures are referred to often in the book so I highly recommend having the book in hand. This book gives the foundations to the modern-day lovely Pairs as we know it and how it developed 1600s-1700s.

Wonderful book for anyone who loves Paris!

I highly recommend this book but I have to say in the Audible version it was difficult to continually hear the references to artwork, drawings and maps that were not accessible. There needs to be a downloadable section that accompanies this Audible book!

Will Stick to Reading On This One

The narration is terrible; should have listened to a sample first. I could only stand 45 minutes of listening. I will read my kindle edition instead and enjoy it much more.

Fascinating, chrisp history connects the various developments and inventions which made Paris the City of Light and every travelers mecca. Blessed with perfect French, the Reader delivers every noun and nuance so beautifully as to truly complement the flowing threads of this history.

An entertaining look at how urban development impacts culture

While this book took a little while to get going it comes into its own talking about how urban development had dramatic impact on culture and the development of style and fashion. An enjoyable listen.

A great history of my favorite city!

This book was quite enlightening about the development of Paris, and the innovations that have led urban development. Loved it!

Excellent template for how to brand a city

A knowledgeable clear and well written story about the evolution of Paris.The book documents the strategic planning to change the city from a medieval to the first modern city in Europe.