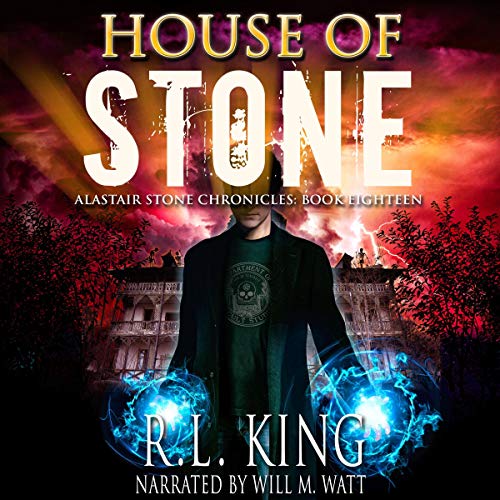 The past lies buried....

Alastair Stone isn't proud of the dark deeds of his family's past, but he thought they were just that: past.

But when a routine renovation of his ancestral home releases a horde of angry spirits bent on vengeance against anyone of his blood, he soon learns that his family's horrific acts were even worse than he ever could have imagined.

Driven from his home, Stone must rally his most trusted friends and allies to discover the truth and find a way to exorcise the relentless spirits.

But the spirits aren't the only threats unearthed. A powerful enemy from the past - one with forbidden and unspeakable powers - also has a vendetta against the Stone family.

And that doesn't even count the mysterious fiend in the sealed room....

Stone has bested many monstrous enemies in his magical career, but is he strong enough to fight his own past?

R l King is a very, very talented author. Her Alastair Stone series is truly fantastic. House of Stone, Book 18 is so imaginative.. Faced with spirits and past dark deeds done my his ancestors is horrifying and terrible. Again Alastiar and his team of good friends come together to solve the problem. Ian, Alastair's son is also involved which is excellent. The plot is amazing. Will M Watt's flawless performance brings the story to life. Bravo! I love this series so much and I hope Ms. King will continue to write more books for this series for a long, long time. Thank you Audible for bringing this fantastic series to us.