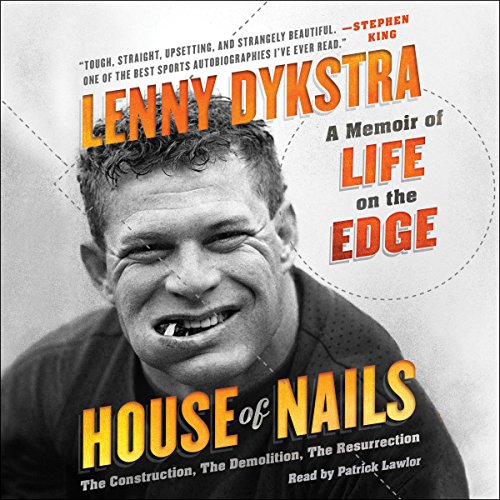 "Tough, straight, upsetting, and strangely beautiful. One of the best sports autobiographies I've ever read. It comes from the heart." (Stephen King)

Eclipsing the traditional sports memoir, House of Nails, by former world champion, multimillionaire entrepreneur, and imprisoned felon Lenny Dykstra, spins a tragicomic tale of Shakespearean proportions - a relentlessly entertaining American epic that careens between the heights and the abyss.

Nicknamed "Nails" for his hustle and grit, Lenny approached the game of baseball - and life - with mythic intensity. During his decade in the majors as a center fielder for the legendary 1980s Mets and the 1990s Phillies, he was named to three All-Star teams and played in two of the most memorable World Series of the modern era. An overachiever known for his clutch hits, high on-base percentage, and aggressive defense, Lenny was later identified by his former minor league roommate, Billy Beane, as the prototypical "Moneyball" player in Michael Lewis' best seller. Tobacco stained, steroid powered, and booze and drug fueled, Nails also defined a notorious era of excess in baseball.

Then came a second act no novelist could plausibly conjure: After retiring, Dykstra became a celebrated business mogul and investment guru. Touted as "one of the great ones" by CNBC's Jim Cramer, he became "baseball's most improbable postcareer success story" (The New Yorker), purchasing a $17.5-million mansion and traveling the world by private jet. But when the economy imploded in 2008, Lenny lost everything. Then the feds moved in: Convicted of bankruptcy fraud (unjustly, he contends), Lenny served two and a half harrowing years in prison, where he was the victim of a savage beating by prison guards that knocked out his front teeth.

The Daily Show's Jon Stewart, channeling the bewildered fascination of many observers, declared that Lenny's outrageous rise and spectacular fall was "the greatest story that I have ever seen in my lifetime". Now, for the first time, Lenny tells all about his tumultuous career, from battling through crippling pain to steroid use and drug addiction to a life of indulgence and excess, then an epic plunge and the long road back to redemption. Was Lenny's hard-charging, risk-it-all nature responsible for his success in baseball and business and his precipitous fall from grace? What lessons, if any, has he learned now that he has had time to think and reflect?

Dykstra's Book is a self serving, probably truthful narrative of his life. Seemed to me that there was a significant amount of purposeful omissions to make his case.

Can't recommend the book, can't dislike the book. It is what it is. There was nothing to keep you glued to it. It was ok, and that's about all. I was glad when I finished it. Sorry Lenny, you were a better player than you are a writer.

I love the book. It was a great story and I believe most of it to be true. The one gig I have is that the reader was not well invested in the story it seems. He did not emphasize the funny spots or the heavier spots well. I think it would have been much better served had Lenny read it himself.

Lenny Dykstra What an Asshole

One thing is clear listening to House of Nails, Dykstra loves dropping names and pretending he is a big deal. He is clearly not learned and will fall again. Too bad.

I loved the Dodgers growing up but knew about dykstra and liked him. I remember his car wash too. Heard the interview on Howard then bought the book next day. Even my wife loved the interview and is not into sports. The book leaves a lot to the imagination. I really enjoyed the parts about coming up as a young baseball player and his stories as a pro but then it tailed off. I wanted to hear more about what he did that was illegal and why he went to prison but it really dances around the topic even though a lot of time is spent on it. There's a lot of "moreovers" and "in addition" transitions all over the place like the editor was just trying to make sense out of a free flowing blob of material (dykstra said he wrote it). I love nails and think he's an interesting guy but this book didn't nail it for me. Sorry bro.

This very entertaining book was Narrated perfectly. The life of Lenny was a great story, & also a lot of fun to follow along. If you are a MLB or Lenny fan, this is a great book!

Foul mouthed gloss over story of a troubled life

That's a tough one. How about people who think that arrogant, foul mouthed, druggies with lots of money are cool...
like Charlie Sheen

What was most disappointing about Lenny Dykstra’s story?

That he glossed over his crimes and was always the victim. His family and ex wife and kids were ignored thru most of the book...I'm sure they suffered greatly....not a good family man.
In the last chapter he gave a mini token apology to his ex-wife....WOW!
.
The scene where he bought the German Shepard for $75K so he could win $100 bet with the doorman...was sickening
He was out to prove EVERYONE has a price bc he would sell his soul for money..

When he got beat up in jail...of course he claimed he was totally innocent (like everything else)

Yes...It reminds us there are people like this in the world...arrogant, cheating, foul mouthed, crass, crude, money grubbers....pathetic

Also he went to jail

I grew up in this period of baseball and the Mets for a moment was great then they all went down hill. Lenny was one man wrecking crew on and off the field. Not a bad true story..

Better than I thought it would be! I like redemption stories. Author is honest, story is interesting.

Cannot begin to describe how great this book is.

Not a Mets fan but a baseball fan . This guy has one hell of a story. I recommend it, in fact, you won't be able to stop listening. loved the German Shepherd story. I would love to hang with Nails. Great guy, great book.

If you are a Lenny Dykstra fan...

If you are a fan of Lenny Dykstra the House of Nails is a must ! I’m so glad I listened to this. I feel like I was there throughout all his ups & downs and I feel like I got to know my favorite MLB player.