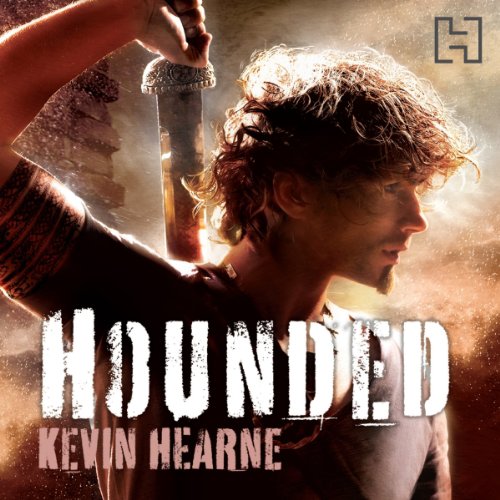 Atticus O'Sullivan, last of the Druids, lives peacefully in Arizona, running an occult bookshop and shape-shifting in his spare time to hunt with his Irish wolfhound. His neighbors and customers think that this handsome, tattooed Irish dude is about twenty-one years old - when in actuality, he's twenty-one centuries old. Not to mention: He draws his power from the earth, possesses a sharp wit, and wields an even sharper magical sword known as Fragarach, the Answerer.

Unfortunately, a very angry Celtic god wants that sword, and he's hounded Atticus for centuries. Now the determined deity has tracked him down, and Atticus will need all his power - plus the help of a seductive goddess of death, his vampire and werewolf team of attorneys, a sexy bartender possessed by a Hindu witch, and some good old-fashioned luck of the Irish - to kick some Celtic arse and deliver himself from evil.

This is book one of the Iron Druid Chronicles series. If you would like to hear more, you will find the first chapter of book two – Hexed – at the end of this recording.

Start of a fantastic journey

There is not enough praise to give for this series. Beginning with this book you are inserted into Atticus life beeing turned upside down. from the first page you get sucked in and you wont regret it. In addition to the great stories in this book and the rest of the series you chuckle and laugh of Atticus and his dog Oberan wich he have learned to mindspeech with him. Oberan is a king of fun and mischeif his terories and thought about life and whats important just makes my day any day. Let there be sausage! You will soon know the understanding of the expression. And with doing so you will never regret it.

Comparing the books in this series is not nessisary. They all are linked into a huge story, a fun and thrilling exating rollercoaster you never want to get of.

What does Christopher Ragland bring to the story that you wouldn’t experience if you just read the book?

Christopher Ragland is the best narrator of this series. Luke daniels do a good job later on but still it all comes down to the voice of Oberon. He just rocks it.

What to say here. It is fun exiting,sometimes a bit sad, enjoyable, easy to listen to and in all Kevin Hearne's story you get fed by some amazing talent of decribing things, his knowlegde. man that man must use isane amount of research time to collect all the information you get in these books. Book 1 as this is is a start on a epic journey in vbery many ways. Fantastic!

Would you consider the audio edition of Hounded to be better than the print version?

Haven't read the printed version but audio book is awesome

Eragon, they both have story lines that are similar and they are both fantastic

What does Christopher Ragland bring to the story that you wouldn’t experience if you just read the book?

Read the book? after hearing the audio book i won't read i would listen to it. :)

the whole book, it was just action and suspense from the beginning.

Loved the dog, liked the druid, enjoyed the read

Christopher Ragland's reading of this book struck just the right balance between laid back, cool without trying, humorous druid and truly scary, I'll hack you to death with my bare hands and spit on your grave, this is why I've lives so long, druid.

He also does a great voice for Oberon, the Irish Wolfhound that he wisely chose not to give an Irish accent.

If you're looking for a light, humorous read, with enough plot to keep you turning the metaphorical pages, enough violence to keep you awake and enough new ideas to keep everything fresh, this is the book for you.

We have one Druid, a coven of witches, a pack of werewolves, a vampire lawyer (not sure which of those two words is scarier), a possessed barmaid, a "merry on whiskey" Irish widow several Fae, three Goddesses and one horseman of the apocolypse and this is just book one of the series.

Most importantly of all, we have a dog with a big heart and a dry sense of humor.

Give this book a try. You won't regret it.

Best new urban fantasy I’ve read for a while.

As I said in the title, I’ve been a fan of urban fantasy since my teens, but somehow Atticus escaped my notice. Now I’ve discovered him, I see that he’s a fantastic character, deserving to sit alongside Harry Dresden on my shelves.

Brilliant, absolutely worth the credits :)

Would you listen to Hounded again? Why?

I would and I do, think Im on my 4th or 5th listen thru the serie now and its still funny :)

The rest of the Irondruid serie obviously.. Its quite its own style imo.

Yes, hard to pause it.

I'd recommend the whole Iron Druid Chronicles if you like this first book, they are great allthough I wasnt so pleased with part 3 "Hammered" - being Scandinavian and quite fond of Thor ;-)

What made the experience of listening to Hounded the most enjoyable?

This is a brilliant book especially as there is no monotheism, Oberon is the deepest and funniest character I have read in a long time.

While entertaining and novel enough to get three stars, I feel like they could have hot someone with an Irish accent or passable impression for the main character, who is clearly meant to have one.

one of my favorite book serie's and the reson I joined Adible, so that I could listen to the full serie's.

What would have made Hounded better?

If the book was focues on more mature readers I think it would have been better for me at least.

What was most disappointing about Kevin Hearne’s story?

The main protagonist of the story is an old druid, realy old, yet he is writen like an obnoxious teenager, lashing out against anyone and everyone, with childish pranks, a prideful and downright bad attitude towards anyone not sworn into the secrets of the supernatural or not as special as himself, despite he himself in the story stating that he tries very hard to not get noticed or recognised for what he is. And he behaves as if no standard he requires of others is expected out of himself. He also has a destinctive lack of weeknesses, except that he falls for beautiful women(like no one does) and perhaps that he makes them interested in him for being so special, he is what every guy want to be and what every girl want to be with. While I can enjoy som guilty pleasure as well as the next guy it comes of as stale and even boring when the entire book is filled with it. It makes the book come of as a teenageres dream instead of an interesting story. This problem is by no means only apparent in the protagonist but most of the characters in the book. There are some exceptions and it makes you wish so much more that the rest of them were not so bland.
This was the biggest flaw of the book and it dragged it down for me, other things I would have liked to see changed is that some of the charactets motivation through the bok does not line up with their actions but this flaw is esier to swallow.

Would you listen to another book narrated by Christopher Ragland?

The performance of the audiobook was alright with two exceptions the dog sounds exactly like scooby doo and every woman sound like an old hag.

I realy love the setting and premise of this type of book urban lore mixed with modern society, a quick witted protagonist. It should be right up my alley for best book of the year but I struggled to get through it.
Maybe it is because the book fell short of what I wanted it to be or something else entirely.

To the good parts; as previously mentioned the setting chosen for this book is realy a marvel with a plethora of intresting characters to choose from. The way the book was written was also reealy good. It was easy to understand and to picture what was going on.

I would like to say that you can feel it is the authors first book and I have definitely read worse but the book make me question if I am the targeted audience, which when I read the premise I felt I should be as an avid fantasy and folk lore nerd. I hope the next book is better, if the problems presist in that one aswell I gor one will not give the third one a chance.

Great Story! But the narrator...

As usual for Kevin Hearne, the story is great, the characters are well developed and relateable and the plot never gets boring. If the excerpt got your attention, go for this book! You wont be dissapointed!
Unfortunately, this record looses a lot due to the narration. Christopher Ragland reads well enough. But the voices of minor characters, espacially the female voices, sound artificial and unnecessarily exaggerared. Sometimes they are even different from chapter to chapter.
If you can get it, I strongly recommend to buy the version narrated by Luke Daniels instead. He consistently gives each character a great and believable voice and does especially well with dialects and the pronounciation of foreign words (Not that I can properly judge that, but they sound believable and without American Accent.) I couldn't find that version on Audible, but maybe you have better luck and they take it into their program.
Anyway, if you don't know the better version narrated by Luke Daniels, this one will be very enjoyable. I can so far recommend everything written by Kevin Hearne.
Give it a try! ;)

I just loved listening to this and I'm looking forward to hear the next ones!!!

Disappointed by this title. The potential was there, but the story/plot was just too thin. The reader was OK, and doing what he could with the material, I guess...

Unforunately the protagonist escapes struggles too easily. Oberron gets on my nerves. But still good to pass the time.