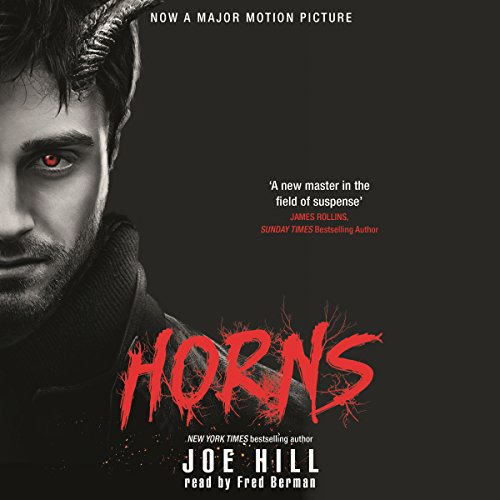 Ignatius Perrish spent the night drunk and doing terrible things. He woke up the next morning with one hell of a hangover, a raging headache... and a pair of horns growing from his temples. Once, Ig lived the life of the blessed: born into privilege, the second son of a renowned American musician, and the younger brother of a rising late-night TV star, Ig had security and wealth and a place in his community. Ig had it all, and more - he had the love of Merrin Williams, a love founded on shared daydreams, mutual daring, and unlikely midsummer magic.

Then beautiful, vivacious Merrin was gone - raped and murdered, under inexplicable circumstances - with Ig the only suspect. He was never tried for the crime, but in the court of public opinion, Ig was and always would be guilty. Now Ig is possessed with a terrible new power to go with his terrible new look, and he means to use it to find the man who killed Merrin and destroyed his life. Being good and praying for the best got him nowhere. It's time for a little revenge; it's time the devil had his due.

Where does Horns rank among all the audiobooks you’ve listened to so far?

What was one of the most memorable moments of Horns?

So many! I loved the devil in a blue dress scene

Have you listened to any of Fred Berman’s other performances before? How does this one compare?

You want to see this!

If you could sum up Horns in three words, what would they be?

What was one of the most memorable moments of Horns?

Have you listened to any of Fred Berman’s other performances before? How does this one compare?

First time and I love his performance

Who was the most memorable character of Horns and why?

Lee - because of the deliverable of Fred is impeccable to represent that character.

A story about great characters, you feel for Iggy Parish, Lee and Merrin. Just like his father Joe''s stories is about people in desperate situations and he makes you feel for the characters and fall in love with them.

I found the plot choppy here and there, and there were parts of the book I simply tuned-out. It was hard to keep interested in the plot at times, and other places simply brilliant. It felt like a first novel attempt but I still found it enjoyable. The storyline left a lot unsaid and a lot undone as far as tying up all the loose ends.

I felt Hill was writing two novels and trying to bind them into one. The ending left me thinking, "And how'd we end up here?" Perhaps I'd tuned out at that point.

In general I find Joe Hill's writing a bit gritty and sometimes offensive. Hill takes his obsession with evil and the devil and twisting the Bible just a bit too far and makes for uncomfortable reading. But, then again I enjoy an uncomfortable read but only if it makes me think and there is some resolution. Some parts of the novel were plain boring. I noticed there were times in this novel that resembled what he'd written in NOS4R2 but I felt NOS4R2 was a much better read.

I loved the choice of character name, Ignatius Martin Perrish, reduced to Ig.

And there were many scenes that were so graphically vivid that I could see the characters and what they were doing. I love when a writer can achieve that.

There's talent in Joe Hill's writing for sure; he's ability to paint a good scene, to make you cringe, he's warped sense of humor and to take a small piece of information or an idea and build a whole story around it. The only area that I felt needed improvement - plot.