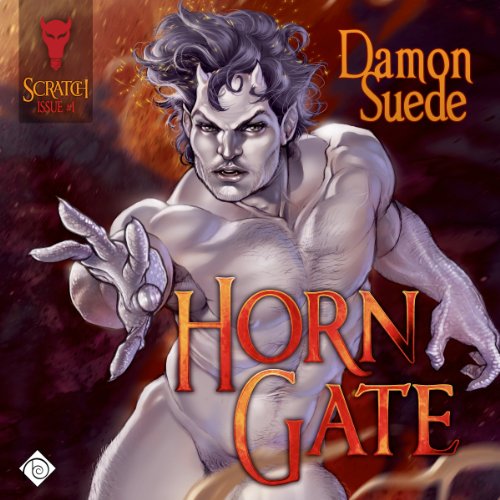 Horn Gate: Open at your own risk.

Librarian Isaac Stein spends his lumpy, lonely days restoring forgotten books, until the night he steals an invitation to a scandalous club steeped in sin. Descending into its bowels, he accidentally discovers Scratch, a wounded demon who feeds on lust.

Consorting with a mortal is a bad idea, but Scratch can't resist the man who knows how to open the portal that will free him and his kind. After centuries of possessing mortals, he finds himself longing to surrender.

To be together, Isaac and Scratch must flirt with damnation and escape an inhuman trafficking ring - and they have to open their hearts or they will never unlock the Horn Gate.

I would, it's different and intriguing.

The relationship between Isaac and Scratch and how it played out mostly through thoughts and dreams.

What does Charlie David bring to the story that you wouldn’t experience if you just read the book?

Everything. He's such a great story teller you can't help but emmerse yourself into the story.

Isaac Stein is a librarian that spends his days restoring and authenticating historical books. He spends his nights alone, longing for someone to see past the few extra pounds he carries, the blemished skin, and want to be with him. After an unplanned birthday visit to a seedy nightclub, Isaac wakes up in his bed with broken memories of an angel and a mind blowing orgasm that can’t possibly be real.

Stranger still, Isaac’s appearance seems to be shifting. With every passing minute he grows more attractive. The extra pounds vanished, his skin now clear, and he is no longer able to walk through life invisible. Isaac returns to the club seeking answers only to find his angel is no angel at all, but a demon. And still, Isaac is drawn to the being with the entrancing voice that uses ancient words and has translucent skin.

I think what I enjoyed most about this was Charlie David’s narration. He’s not a narrator so much as a story teller, having this ability to draw you in and make you see the words he’s saying. The story itself was a bit odd, but I was engrossed the entire time none the less. Suede has woven and intriguing tale of demons, curses, forbidden attraction and passion. While the sexual aspect of the story was brief, it became more long and drawn out by the characters thoughts and innuendos so there was this anticipation of sorts that kept me on the edge of my seat.

If you like fantasy, other worldly sort of stories that are short, hot and fun without any actual sex in the story, but it’s still a sexy story (keep up now) then grab yourself a copy of Horn Gate.

Wish it went on longer, it’s so good.

I wish there was more of this story, it was a short listening but it was such a pleasurable experience, I was hoping for more descriptions between Isaac and scratch, but it is still done excellently as it is, I can’t wait for a possible sequel for what’s on the other side for the two lovers.

Charlie David has been an excellent narrator for the last several books that he has narrated, such a wonderful voice, he knows how to make me shiver.

Damon crafts a intriguing tale.
Well worth the read
Audio book excellent
I will be searching for new material that his muse whispers

Will not keep this one

Usually I don't pick books that have been rated less than 4 stars, but I've previously enjoyed books by Damon Suede, and Charlie David's narrations are usually perfect. I also liked Bad idea where Scratch is a character.

Coming from that, here is what I think about Horn Gate:

It is messy, and at times difficult to understand and follow the thoughts and actions of the main character. I feel like I never got to know the characters and why they behaved the way they did. It certainly had enough action to make a short story interesting, but I was unable connect with the story itself and everyone in it. A bit of Hebrew was also thrown into the mix, which didn't make the plot easier to follow.

Charlie David has a really great voice. Why, oh why, was everything coming out of Scrath's mouth whispered? Not only was it at times hard to understand what he was saying, it made the whole listening experience bad.

Perhaps the written version is better? Or maybe this would have worked better as a full length novel instead of a 3 hour listen? I'm not sure what could have saved this, for me it just felt like a draft and not a finished story. Will keep looking for other things to listen to by this due, but will return this one.

The Hebrew Lore had me curious and wanting more. It was a quick listen. I found myself wanting to learn more about the main character and the lore of these Incubus Angel/Demon men.

This could easily be expanded into a full-lenght novel. I would defiantly revisit the world if that ever happened!