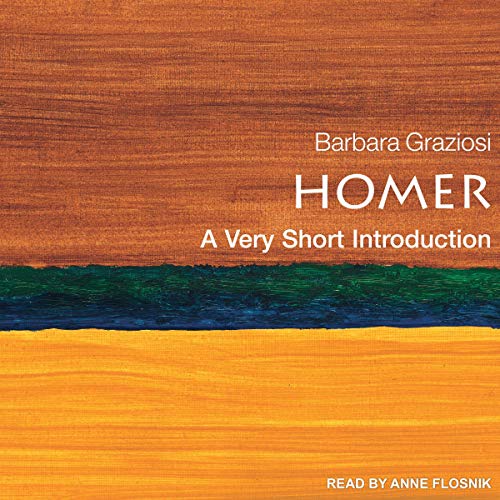 Homer's mythological tales of war and homecoming, The Iliad and The Odyssey, are widely considered to be two of the most influential works in the history of western literature. Yet their author, "the greatest poet that ever lived," is something of a mystery. By the sixth century BCE, Homer had already become a mythical figure, and today debate continues as to whether he ever existed.

In Homer, Barbara Graziosi considers Homer's famous works and their impact on readers throughout the centuries. She shows how The Iliad and The Odyssey benefit from a tradition of reading that spans well over two millennia, stemming from ancient scholars at the library of Alexandria, in the third and second centuries BCE, who wrote some of the first commentaries on the Homeric epics. Summaries of these scholars' notes made their way into the margins of Byzantine manuscripts; from Byzantium the annotated manuscripts traveled to Italy; and the ancient notes finally appeared in the first printed editions of Homer. Along the way, Homer's works have inspired artists, writers, philosophers, musicians, playwrights, and film-makers. Exploring the main literary, historical, cultural, and archaeological issues at the heart of Homer's narratives, Graziosi analyzes the enduring appeal of Homer and his iconic works.

A first-rate introduction to Homer by way of archaeology, linguistics, and analytical summaries of the poems themselves. Graziosi crams a lot of info into a small space, but it doesn’t feel rushed; it feels more like a pleasant after-dinner conversation. It’s one of the best introductions to the subject I’ve read.

There are four introductory chapters and then three chapters each about the Iliad and the Odyssey. Homer’s work is examined in the context of his own time and his influence on later writers, especially Virgil and Dante. The only topic Graziosi doesn’t cover — among those I find interesting — is Homer in English translation. But translation is endless, and a discussion of it would be endless, so it’s just as well she omits it.

One caution about my opinion. I’ve read the two poems so often, in different translations, that I can’t really judge how accessible Graziosi’s book will be to someone who isn’t already familiar with the story. Her summaries are detailed, but they are focused on specific incidents; they don’t give you a Cliff’s Notes overview of the whole. I think it would be best read after at least some exposure to the poems.

Anne Flosnik has a lovely voice and reads with interest and clarity.