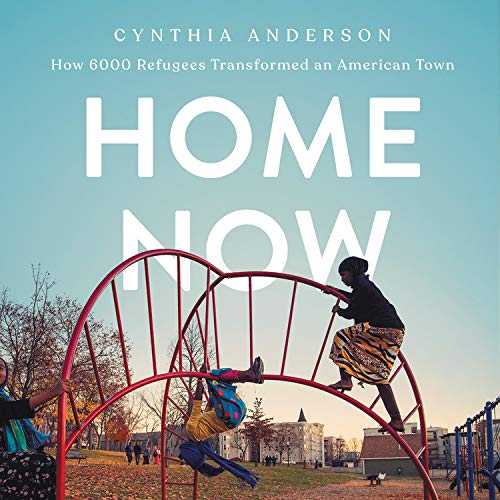 A moving chronicle of who belongs in America.

Like so many American factory towns, Lewiston, Maine, thrived until its mill jobs disappeared and the young began leaving. But then the story unexpectedly veered: over the course of fifteen years, the city became home to thousands of African immigrants and, along the way, turned into one of the most Muslim towns in the US. Now about 6,000 of Lewiston's 36,000 inhabitants are refugees and asylum seekers, many of them Somali. Cynthia Anderson tells the story of this fractious yet resilient city near where she grew up, offering the unfolding drama of a community's reinvention - and humanizing some of the defining political issues in America today.

In Lewiston, progress is real but precarious. Anderson takes the reader deep into the lives of both immigrants and lifelong Mainers: a single Muslim mom, an anti-Islamist activist, a Congolese asylum seeker, a Somali community leader. Their lives unfold in these pages as anti-immigrant sentiment rises across the US and national realities collide with those in Lewiston. Home Now gives a poignant account of America's evolving relationship with religion and race, and makes a sensitive yet powerful case for embracing change.

"Home Now folds us into a non-polemical but clear refutation of the villainization of immigrants. Families we come to know and respect have survived appalling hardship in Africa and settled in a Maine mill town that's been demoralized after factories closed or moved on. Nasafari Nahumure, Jamilo Maalim, and the many others on these pages - they stand in for about 6,000 new immigrants in all--help revitalize Lewiston's spirit and commerce. Cynthia Anderson's expert reporting welcomes us, in highly readable style, to the complex and constructive fate of the real America. Her careful rendering, and her insights, deepen our understanding of what's happening here and now." (Mark Kramer, founding director of the Nieman Program on Narrative Journalism at Harvard University)

"It's a book that feels both current and necessary, a microcosm of the immigration stories we see playing out daily on the national stage." (Portland Press Herald)

Not worth the read

This book completely ignores the issues on the other side (such as lethal attacks by Somalis on local white residents in Kennedy park) and blames all the hate toward them on President Trump when these issues were present long before him or Obama took office. Highly politically biased and not worth the read.