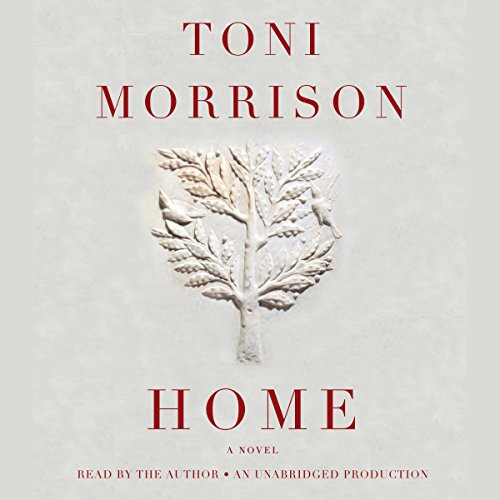 America's most celebrated novelist, Nobel Prize-winner Toni Morrison extends her profound take on our history with this twentieth-century tale of redemption: a taut and tortured story about one man's desperate search for himself in a world disfigured by war.

Frank Money is an angry, self-loathing veteran of the Korean War who, after traumatic experiences on the front lines, finds himself back in racist America with more than just physical scars. His home may seem alien to him, but he is shocked out of his crippling apathy by the need to rescue his medically abused younger sister and take her back to the small Georgia town they come from and that he's hated all his life.

As Frank revisits his memories from childhood and the war that have left him questioning his sense of self, he discovers a profound courage he had thought he could never possess again. A deeply moving novel about an apparently defeated man finding his manhood - and his home.

"Profound . . . Morrison's portrayal of Frank is vivid and intimate, her portraits of the women in his life equally masterful. Its brevity, stark prose, and small cast of characters notwithstanding, this story of a man struggling to reclaim his roots and his manhood is enormously powerful.” (Stephan Lee, O, The Oprah Magazine)
“Morrison’s perfect prose [is] immaculate...Beautiful, brutal.” ( Publishers Weekly)
“A deceptively rich and cumulatively powerful novel.” ( Kirkus)

Home -- For Your BookClub or Classroom, or Brain!

Would you consider the audio edition of Home to be better than the print version?

Both are excellent. I listened first, then went and read it in order to study it and learn from a master.

Cee, she learns to stand tall and believe in herself regardless of her childhood and the wrong done to her.

Hard to pick, but three come to mind. First, the opening poem, it brings chills down the spine. Next, when Cee tells Frank that she has a right to cry. And finally, the ending poem and all its potential meanings. I'll give you the first just so you don't miss it on the audio version:

“Whose house is this?
Whose night keeps out the light
In here? Say, who owns this house?
It’s not mine. I dreamed another, sweeter, brighter
With a view of lakes crossed in painted boats;
Of fields wide as arms open for me.
This house is strange. Its shadows lie.
Say, tell me, why does its lock fit my key?”

I don't know about you, but this resonates deep within me. It's the story of growing up, of finding yourself. Of finding out that home, for good or bad, has made a lasting impression on you, and, just maybe, you can reconcile yourself with that. Perhaps, on a grander scale, it is also a reconciliation to the awareness and owning of our country, good and bad.
Finally, perhaps you can reconcile yourself with you, good and bad

I love the book for the imagery of the time that it invokes, and for the depth of each character that the author gives us. I love the use of many literary styles, and the fact that the book is still very accessible. I love the ending.

Here is the low down:

Frank is a Korean vet who was treated equally in the war but slips back into segregated America as it if it is still the norm, which is a good subtle shock for the modern reader, so far away from it. But Frank has bigger worries, mainly that he is haunted by the war. This book is the story of his quest to find his sister, and during his travels he finds himself. This is a very American theme, in the fashion of Mark Twain and Charles Frazier (Cold Mountain). Frank breaks through and speaks to the reader, and occasionally to the author; this is a highly effective, somewhat twisted, way to jar the reader out of the story itself and into deeper thought. Toni Morrison is skilled enough to pull it off.

Cee (Ycidra) is Frank's sister, who thinks that maybe she'd have learned to think for herself if Frank hadn't been there to constantly protect her. She is an accident waiting to happen, a consummate victim, although she doesn't try to be, so trouble finds her when Frank leaves for the war. She and Frank bind each other to this earth, and eventually save each other, once they learn their own self worth. Something in that reminds me of Celie in the Color Purple, and Cee's story is very much an American girl coming of age story, with the honest portrayal of the plight of the black woman.

There are other memorable characters, some snapshots, some deeper, and plenty of themes, all delivered in a punch at 160 pages on my Kindle. Morrison trueists don't like this book very much because it doesn't use the magical realism style that they all love. If that includes you, know that this is American realism fiction, and take the time to think deeper than the story. Ask yourself how the author is so talented to make us care in such a short time. Look at the wording and sentences, and see how she shows rather than tells. Search for all those little details that make the writing so good. Learn from a living legend, who makes you dissatisfied with the humdrum.

Would you listen to Home again? Why?

I liked the way the story slowly revealed itself. I normally do not like slow moving stories, but was intrigued by this one. Ms. Morrison does an excellent job.

not a novel, but a collection of short stories

I adore Tori Morrison. Beloved is my favorite book of all time. I read A Mercy (her last book) when it came out in hard cover and it was just a mess. It was surprising to me that Ms. Morrison would write such a disjointed book. However, I am reviewing _Home_ and while it is a lovely collection of short, unrelated stories, I was expecting a novel. Nowhere in the description does it say it is short stories. So... if you love Morrison's way of putting words together (and that's what I'm letting myself concentrate on as I listen for the second time) and her reading voice (she doesn't "act". She just reads)...but the feeling is so intimate that I feel like a sweet fairy godmother is reading to me. But, some people don't like that and have complained.

If you like short stories (I'm not a big fan) and you have enjoyed Morrison's books in the past, then you may like this one. Her language is just spectacular and I don't regret spending a credit on such a short book.

Personally, I felt the best thing about this work was the performance; languid, sweetly pleasing to the ear and thoughtful.

The characters were beautifully developed and interesting but nebulous; coming into being then melting away as another came to take its place.

When "C" appeared I began to connect. Finally, I thought, I had found the protagonist, the character that was going to carry the story, but just a suddenly she too was gone, just like the rest. It was just too frustrating!

I am certain that my inability to connect with this work had more to do with a lack on my part; I didn't take literature in college, then with the work; which is beautifully written and beautifully performed.

I found it too urbane and sophisticated for my tastes, so after 5 chapters and no, apparent, common denominator, I simply gave up. Because even after 5 chapters my interest hadn't peaked enough to want to know where this story was going.

If you could sum up Home in three words, what would they be?

Narrators of the story. Each one is completely believable.

Have you listened to any of Toni Morrison’s other performances before? How does this one compare?

I love Toni Morrison's reading style here, such an enhancement to the experience. She seems to lean over the arm of her porch chair and share her story privately and intimately with us as if we are a trustworthy friend. We listen quietly and hope we deserve her trust.

Multiple times, I needed to pause, backtrack, and listen again. I will certainly listen/read this book again and will recommend it for my Literature/Book Group.

I have already recommended the audible version of this book to many people. It will surely become a classic and stand up for generations like the grand bay tree in the story.

1993 Nobel Prize. A taut precisely written novel about Frank Money, an African-American Korean War veteran fighting insanity (PTS) whilst working his way back to his sister Cee in their home in Alabama. Many locks fit his key – why? Frank’s and Cee’s travels are at once heart-wrenching and universal. This book was more accessible than Beloved.

Stick to a physical book

I found the story and characters interesting and engaging. I would have rated the book much higher if it had been narrated by someone other than the author. Ms. Morrison wove an interesting story but her narration was monotone and she sounded bored. It was often difficult to hear or understand what she was saying. I will confine my future adventures into Toni Morrison's work will be in a physical book or e-book - especially if she chooses to narrate her own work again.

I enjoyed this novel for the simple fact that is was written by Toni Morrison and read by Toni Morrison. I had to speed up the narrator though because she is a slow reader. I really enjoy her novels and this one did not disappoint. It isn't my favorite Morrison book, but it was a good story!

What made the experience of listening to Home the most enjoyable?

Listening to Morrison's voice narrating the book was one of the best experiences I have had!

Frank was my favorite character. I like his change of attitude in the end.

She is amazing! Her voice embodies the story in an astonishing way!

If you could rename Home, what would you call it?

I hope there will be more books narrated by Toni Morrison in the future! It was a wonderful experience to read the book and to listen to her voice! I would like to thank Toni Morrison for this amazing book!

Author should not read their own works

Not the best use of my time as the monotone voice of the reader did nothing to enhance the story. I would have preferred to read the book myself.

Another actor reading would have brought more life to the story.