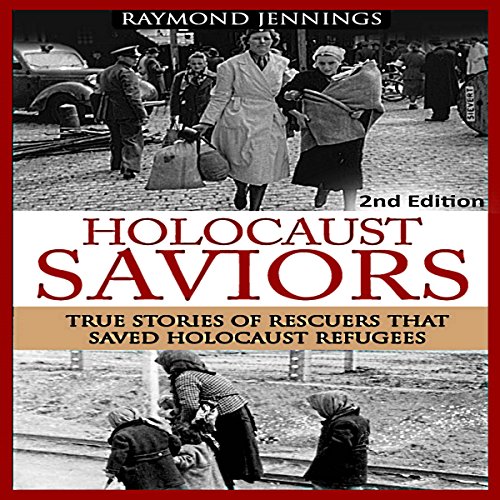 When we hear the word "holocaust", we immediately remember the dark days, the blood, the people, and the pain that no words can express. This huge event, daunting as it can be, left a mark in the lives of the people who experienced it and even those who have only heard of it. The Nazis not only brought destruction, but they brought an unforgettable scar amongst the human race. At those times, the victims would have called for a savior, someone who could literally take them out from the hell they were living in. Holocaust Saviors: True Stories of Rescuers That Saved Holocaust Refugees is a book that talks about those heroes. They were ordinary people who also tasted the face of death but didn't crumble. Despite the sight of fear, these brave hearts not only survived, but they helped others survive as well.

In this book, you will learn about the lives of:

This book is about the people that went out of their way to save a small part of humanity. This book will give you a clear and detailed view of who they are and what their accomplishments were in times where there seemed to be no hope. You can begin to appreciate the lives of these heroes by getting your own copy of Holocaust Saviors: True Stories of Rescuers That Saved Holocaust Refugees.

This is a great book to help you find more books

This book gives a brief overview of the stories of many individuals and groups that did so much to save Jewish and others during the Holocaust. Each and every one of these have been, or will most likely be the subjects I’ve their own books. I have a list of the names and will be looking for individual books about what they did for more in depth information. This is a great book to help you find more great books and it is also great for YA to learn about the Holocaust without too much dark detail. I was voluntarily provided this free review copy audiobook by the author, narrator or publisher

Holocaust Saviors. The stories of some real life heroes. Who risked everything to help Jewish people who were being rounded up and sent to concentration camps for extermination. This is a very good book that tells of some unlikely people. A little good in a world of madness. Please take the time to listen to this audiobook. Lest we forget. I received a free copy of this audio book at my own request and voluntarily leave this honest review. .

very good book. well narratted. Did not know of a lot of these people. Buy.