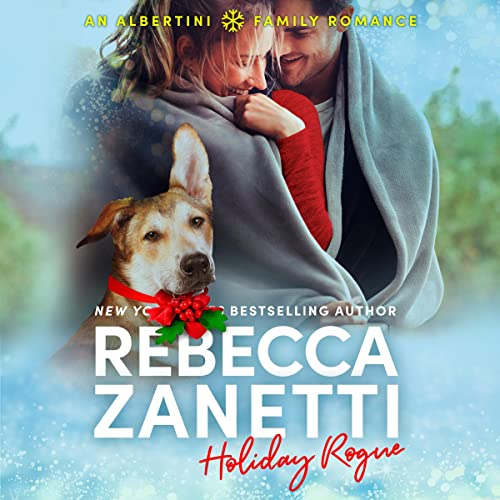 Danger and mistletoe are a deadly combination.

Bosco Albertini learned the hard way that focusing on his career is a lot safer than investing in love. So when he meets his sweet new neighbor, he puts her firmly in the friend zone, despite her soft hazel eyes, sharp wit, and tempting curves. It soon becomes difficult to keep her there because his brothers, his Nonna, and even his dog already adore her—and he’s not far behind.

Marlie Kreuk accepts the friend zone from the too sexy soldier because, hey, when a guy puts you there, he’s a moron who doesn’t deserve more. But when danger comes for her and Bosco risks his spectacular body to protect her, she can’t help but wish for romance. Although, he’s going to have to work for it.

With danger all around, Bosco and Marlie must face their explosive attraction while defeating deadly attackers, but even that is nothing compared to handling the Albertini matchmakers during the Christmas season. Busting out of that friend zone and surviving will take all of Bosco’s training, Marlie’s courage, and the magic of the holidays.

I am just going to repeat myself when I say that I am a huge fan of Rebecca Zanetti. I like all of her series but this one - to me - has the most humor. Anna's family is crazy, like totally bonkers, while at the same time being a family that you would just love to be a part of. This book is more of a novella and it takes place at the same time as the book before (the book that has Anna involved in a case of the Santa's).

We get to really meet Bosco Albertini, the youngest of the 5 brothers, and his new next door neighbor Marlie. For only being a little over a hundred pages, there is a whole lot of drama and it starts pretty quickly. This novella revolves around Bosco and Marlie, but somehow, we get to see most of the family involved. Let's see, on page there's Anna, Tessa, Detective Pierce, Nona, Aiden, every one of the Albertini brothers...and I'm sure I missed some. So yeah, it is chocked full of action, drama and a whole lot of laughs.

While the plot on this one does stretch the limits on the believability factor - I'm willing to ignore that because I just love this series. I can immerse myself in the story and completely believe that within 2 weeks of moving in, Marlie is the target of an attempted murder not once, but twice as well as a kidnapping...see, no problem.

And, you know those Albertini boys, the fall hard and they fall fast....

🌻I enjoy every book, in this series 🌻

This is a great series with great characters, lots of action and intrigue, sexy alpha males, strong females and lots of humor. The only thing that could have made this story better, would be more of it. It was way too short, for my liking!

Terrific story, I was caught from page one. This is the first story I've heard from this series. I'm off to start at the beginning. Can't wait to hear more.

Stella Bloom did great as usual.

Bosco Albertini's new next door neighbor is Marlie Kreuk. She comes across the family dog, Fabio that he's dog-sitting. Both Bosco and Fabio are attracted to Marlie but he tells her that they can only be friends. He comes to regret that decision especially when Marlie is in danger. Albertini men fall hard and Bosco is on his way down. This is a short story but it's not rushed. I hope it's a prequel to a spinoff to Anna's series. Stella Bloom was a great narrator.

Loved it!! Always happy to spend time in the Albertini universe. Only negative is that it was too short. I think RZ needs a full series spinoff for the cousins!!