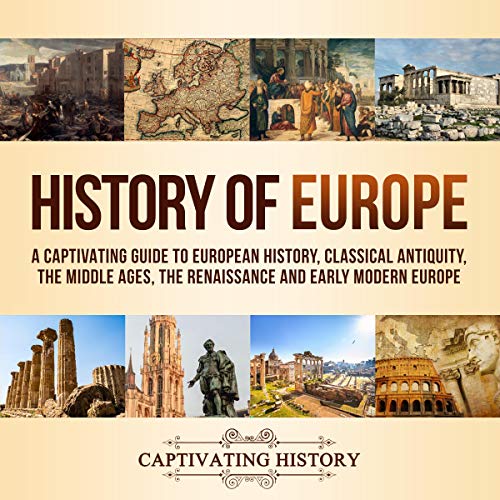 If you want to discover the captivating history of Europe, then this audiobook might be what you're looking for. It includes five books that cover topics like ancient history, influence of ancient Greece and Rome, fall of the Roman Empire, the Renaissance, important events, and much more.

Five captivating manuscripts in one audiobook:

If you want to learn more about the history of Europe, scroll up and click the "buy now" button!

information on who the author

A pretty good primer for those looking for jumping off points about specific shows of interest.

This book succeeded in presenting a general overview of the major events that took place in Europe as well as evens that were undertaken by Europeans throughout the world over the past 2,500 years. Some events, epochs, ideas of phenomena were covered in significant detail, while others were skimped over. It has however broadened my perspective on European history and inspired me to look into several topics in greater detail that I had either had never heard of or knew very little about prior to listening to this work.

The narration was well articulated but could be a monotone at times.

This is a great refresher on some of the major events in history. Quick listen Great for an intro, review, or a guide for students taking a course in History.

Fantastic! Informative Yet not too Detailed

the audible target the highlights without leaving out pertinent info. Very informative. I used Google search while
listen to expand my knowledge.

This is a very limited history that is far to short on specifics. I should have known better than to buy this. You cannot cover the history

An informative listen with a bunch of information about through the years. This is worth the listen. Keep up the great work.

Great audible to listen the Royals!

Great for an intro, review or a guide for students taking a course in History

Love how the audible target the highlights without leaving out pertinent info. Very informative. I used Google search while listening to expand my knowledge.

Do yourself a favor and check it out

This audiblet as supplemental information used in World History My hat is off to the Captivating History staff on another fine effort by adding to the literature of this field!