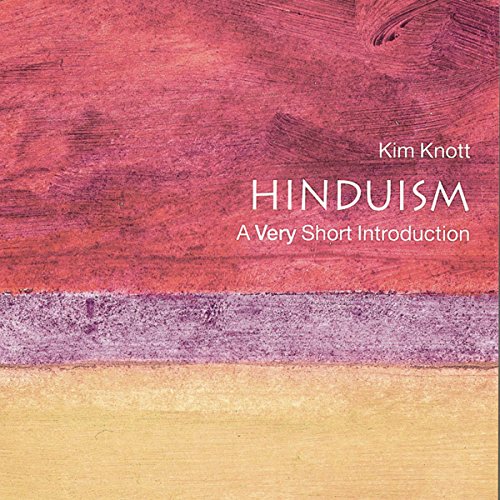 Hinduism is practiced by about 80% of India's population, and by about 30 million people outside India. But how is Hinduism defined, and what basis does the religion have? In this Very Short Introduction, Kim Knott provides clear insight into the beliefs and authority of Hindus and Hinduism, and considers the ways in which it has been affected by colonialism and modernity.

Knott offers succinct explanations of Hinduism's central preoccupations, including the role of contemporary gurus and teachers in the quest for spiritual fulfillment; and the function of regular performances of the Mahabharata and Ramayana - scriptures that present the divine in personal form (avatara) and provide models of behavior for everyone, from kings and warriors to servants and children, and which focus on the dharma, the appropriate duties and moral responsibilities of the different varna or classes. The author also considers the challenges posed to Hinduism today as it spreads far beyond India, and as concerns are raised about issues such as dowry, death, caste prejudice, and the place of women in Hindu society.

The presence of Hinduism as a religion alongside others requires Hindus to think about and articulate what is important to them in ways which can be understood by outsiders. Yet the challenge of passing down what is sacred to new generations of insiders remains ever presssing...
- Kim Knott, Hinduism: VSI

This is another example of an early Oxford VSI trying to work through the format constraints (length) of Oxford's Very Short Introductions AND (as Justin Evans pointed out in his review) ALSO confront the handicap of the "general academic climate". I'm not sure the current academic climate is bad. But when constrained to introduce a large topic like Hinduism in 150 pages or less AND need to spend some of that space giving alms to various critiques (feminist, marxist, colonial, etc), it DOES come at a cost.

The book was well written and she does a very fine job of covering most of the ground you would expect. I was hoping for a bit more on rites, Hindu scripture, etc. While I just got done lightly critiquing Knott (or Oxford) for the limits of the form, I was still fascinated by Knotts exploration of the place of women, the Dalits (undesirables), Black Waters, and other modern challenges for Hinduism and Hindus.

My favorite parts dealt with Hinduism and its relationship with other religions and the West (especially Great Britain). The way Hinduism (and as a short-cut I'm calling all the various Vedic religions Hinduism) has changed and evolved as it bumps and grinds into other cultures and gets reflected back, adapted, fragmented, and/or upgraded.

Anyway, it was worth the time and left me with a better 30,000 foot understanding of Hinduism(s). I still don't feel on real solid ground (like I do with many forms of Christianity, Islam, Judaism, etc). I need to spend more time reading the Vedas, the Upanishads, the Epics, and the Sutras. I've danced around them, periodically, but I've never come close to studying any at length.

Bad pronunciation of sanskrit words. You need to be a little better at this next time.

Indeed a very short, but still excellent introduction to Hinduism. Provides a clear, well-organized, concise overview of the history, religious practices, gods, philosophical schools, and of various other aspects of Hinduism. Professor Knott's erudition and enthusiasm for the subject matter are apparent throughout this introductory work.

More of a History lesson of India

The book did not answer much of what Hinduism is. Was more of a history of India by the west. The religion as viewed in the eyes from someone from the west. The reader was fantastic but the book fell far short of it's title.