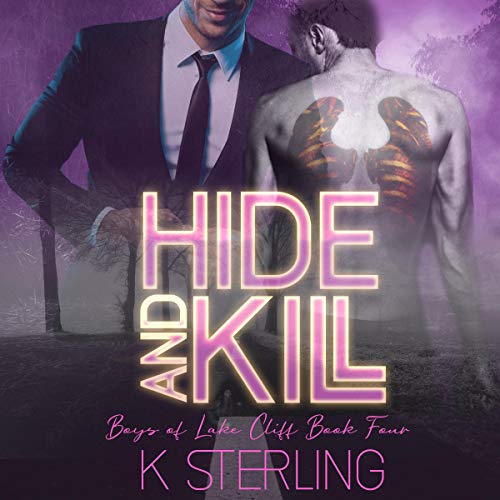 K. Sterling invites you to return to Lake Cliff and catch up with Aiden, Lane, Lavender, and Sage in this sequel to In The Kill and crossover with the Hide and Keep trilogy.

Can you domesticate an international assassin? Can a criminal be reformed and play well with others?

Happily ever after doesn't always happen right away or as easily as you might imagine. Lavender must decide how much he's willing to sacrifice for love and if he can make peace with his past.

Despite his hopes, fate isn't ready to let Lane West settle into his own happily ever after peacefully. A new threat comes to Lake Cliff and he's forced to team up with his worst nightmare.

“You didn’t bring a vest,” Lane said and Lavender snorted.

“I don’t plan on getting shot,” he said absently as he stared at the diner and Lane rolled his eyes.

“Or it wouldn’t compliment your ensemble,” he muttered and Lavender shrugged.

“What’s the point really?” He asked. “I can’t wear it under my jacket. Even if it fit, I would ruin the clean lines and

proportions. And it would be ridiculous to wear it over my jacket,” he added and Lane raised a brow.

“Because it would look stupid?” He asked and Lavender gave him an impatient look.

“No. They’d see it and aim for my head,” he said and Lane winced in agreement.

“Good point,” he said. “You can hang back with the rifle if I have to go in,” he said and Lavender sighed wearily.

“How about you wear your vest because it keeps you from getting cold or jumping at loud sounds and I’ll make sure I don’t get shot?"

Kinda sad its over😭

I have really enjoyed this series and I love the blended stories of Aiden and Lane and Sage and Lavender. I kinda hope they'll be at least 1 more.

Wow, this audible was sooo good! I love Lane and Aiden’s voices but really love Lavender’s and Sage’s voices, especially during sex scenes! And Sage’s voice when he’s high is the best! Reminds me of Dazed and Confused movie. Anyway, loved this and I highly recommend!!! ❤️❤️❤️❤️❤️

I have enjoyed this series very much and this one is even more enjoyable with Aiden and Lane interacting with another couple.

I loved how much lower key this was from book 1. It still has drama, intrigue, danger, heat and laughs, but I liked delving into their personal lives. I'm a voyeur. The little domestic ticks Jeremy has and Lane and Aiden's domestic partnership gave more insight into the men themselves. All is not rosy! I liked the jealousy, and I loved seeing them adjust to their changing life situation, the learning curve of a new life, and domestic partnership. Both couples are unique and interesting, and I enjoyed getting to know them better. Jeremy in the water-lol; Jeremy walking in on Lane and Aiden was a hoot!! Jeremy's parents get partial redemption for caring after they caused the damage. More than likely, things would be vastly different if they hadn't reacted and treated him thusly after he came out to them. That's their burden for life! Jeremy's vows are #everything!!! I am in lust with this series. More please. The narrator's voice and expressions added to my enjoyment of this story. I voluntarily listened to a free copy of this story and am giving an honest review. Tens stars!!

I have read this book, but it's nice to go back and revisit. Especially listening to it. You enjoy the book on a whole different level. Loved all the different voices of the characters. Each one is distinctive and you have no problem figuring out who is talking. He even did an awesome job of Jeremy's voice when he was sick. Great job all around.

I have been a fan of K. Sterling for a number of years now. The author never fails to deliver a wonderful story. I truly enjoy these audiobooks as they allow me to listen to these wonderful stories whenever I’m in the car.

Hide and Kill is a wonderful continuation of the Lake Cliff series. We get to explore Lavender (aka Jeremy) and Sage’s relationship, and see how their interactions with both Lane and Aiden change throughout the story.

I am so glad to see how Lane and Jeremy have teamed up once again to deal with some bad guys. I’m also glad that I got to see how similar Jeremy (a.k.a. lavender) and Aiden are even though they are so different.

The love that these two couples have for each other is truly heartwarming.

Mr. Sterling has done a fantastic job narrating this book, and challenging himself with all the different characters the book entails. Kudos to the Sterling‘s for their amazing talents.

Do yourself a favor give this book a listen/read! You won’t be disappointed I know I wasn’t