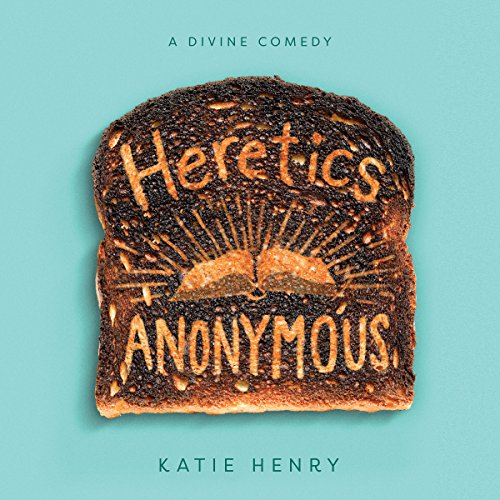 Put an atheist in a strict Catholic school? Expect comedy, chaos, and an Inquisition. The Breakfast Club meets Saved! in debut author Katie Henry’s hilarious novel about a band of misfits who set out to challenge their school, one nun at a time. Perfect for fans of Becky Albertalli and Robyn Schneider.

When Michael walks through the doors of Catholic school, things can’t get much worse. His dad has just made the family move again, and Michael needs a friend. When a girl challenges their teacher in class, Michael thinks he might have found one, and a fellow atheist at that. Only this girl, Lucy, isn’t just Catholic... she wants to be a priest.

Lucy introduces Michael to other St. Clare’s outcasts, and he officially joins Heretics Anonymous, where he can be an atheist, Lucy can be an outspoken feminist, Avi can be Jewish and gay, Max can wear whatever he wants, and Eden can practice paganism.

Michael encourages the Heretics to go from secret society to rebels intent on exposing the school’s hypocrisies one stunt at a time. But when Michael takes one mission too far - putting the other Heretics at risk - he must decide whether to fight for his own freedom or rely on faith, whatever that means, in God, his friends, or himself.

Excellent reading and a truly fascinating take on atheism, and the relationships between the characters were so real to me. Micheal Crouch read Katie Henry's words with such raw and untapped emotions that the subject really spoke to me. Absolutely beautiful book. #HereticsAnonymous #Tagsgiving #Sweepstakes

Such a great read!

I picked up this book by recommendation of a friend and I'm so glad I did. it was funny, cute and just delightful. Highly recomend it.

“The” Good Book is front and center in this dramedy about the meaning of love, morality, rules, and family. Narrated by the incomparable Michael Crouch, we transfer to St. Claire High School as Juniors with atheist protagonist Michael, whose vagabond childhood, has made him weary of creating any attachments. His father takes every promotion, regardless of location, and has moved his family four times in ten years. The school is burdened by Catholic tradition which at times makes little rational sense. Several students who rail at hypocrisy and the dress code gather to create an underground society known as Heretics Anonymous. But, this is only the beginning of the story. As we experience the trials and tribulations of the characters, we find something extraordinary and rare in a book —humor, peace, and grace. This is truly a good book.

I loved this book! I recommend it to anyone! It is well written ! Great job!

I had started this last year but then I got busy and I couldn't finish it. But I am finally able to finish this book and it was just as AWESOME and AMAZING as when I started it! I highly recommend it! AWESOME, AMAZING, BRILLIANT and EPIC! A MUST READ!

A wonderful read exploring teenage angst and dealing with difficult people, while having an interesting story line. Enjoyed the character development and the reading.