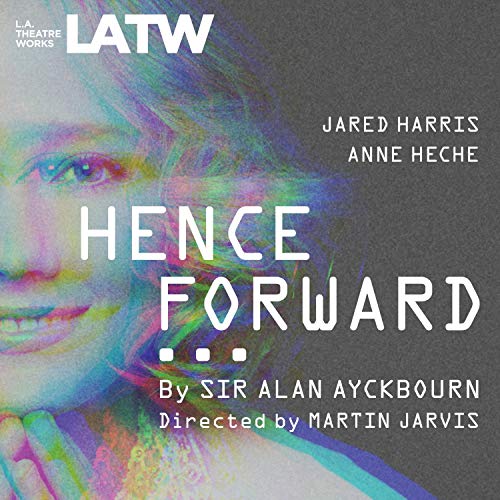 Rarely does a stage play combine science fiction, social dystopia, and laugh-out-loud comedy so seamlessly (or ever, really). The versatile Jared Harris (who has played Henry VIII and John Lennon in his career) plays Jerome, a reclusive electronic music composer who lives in a dicey section of town in a future "sometime quite soon" and has inherited, Nan, an android, from a neighbor. Anne Heche, sounding so perfectly put upon as Jerome's demanding former wife, and Moira Quirk, as the undemanding new mistress, have a wonderful time in dual roles taking turns providing the mechanical voice of the robot. Clever use of music "sampling" techniques turn Heche and Quirk's voices into futuristic songs. Marvelously inventive and entertaining.

Starring Anne Heche and Jared Harris, the hilarious Henceforward... is one of Alan Ayckbourn’s most unusual works. In the near-future, a composer with creative block tries to reunite with his estranged wife and daughter, hoping their reconciliation will free his mind to create his greatest musical masterpiece. But his own erratic impulses hinder his journey to creative freedom.

Recorded at The Invisible Studios, West Hollywood, in August 2010.

Lead funding for this production is provided by the Sidney E. Frank Foundation.

Anne Heche as Corrina/Nan (Act I)

Performances seemed very good, but you miss a lot just listening. Needs to be seen.