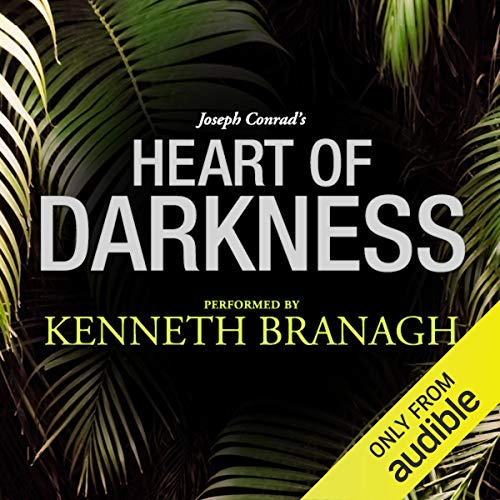 Heart of Darkness: A Signature Performance by Kenneth Branagh

"The horror! The horror!" In this brooding and justly celebrated novella of 1902, seaman Charles Marlow is cruising quietly down the Thames at dusk with some friends. As night begins to fall, he tells them of his harrowing journey down an African river in search of the unscrupulous and near-legendary ivory trader named Kurtz, a quest deep into inky spiritual and symbolic darkness. Acclaimed Irish actor/director Kenneth Branagh impersonates Marlow in this recording. Admirably, while fully playing the drama, he never goes overboard. He plays the tale for the great yarn that it is. But had he taken more cognizance of its trajectory and subtleties, he would have made the listening experience far richer than he has.

Prose that demands to be read aloud requires a special kind of narrator. For the Audible Signature Classics edition of Joseph Conrad’s atmospheric masterpiece, Heart of Darkness, we called upon four-time Academy Award nominee Kenneth Branagh.

Branagh’s performance is riveting because he reads as though he’s telling a ghost story by a campfire, capturing the story’s sense of claustrophobia, while hinting at the storyteller Marlow’s own creeping madness. Heart of Darkness follows Captain Marlow into the colonial Congo where he searches for a mysterious ivory trader, Kurtz, and discovers an evil that will haunt him forever.

With this landmark work, Conrad is credited with bringing the novel into the twentieth century; we think Branagh brings it into the twenty-first.

"Acclaimed Irish actor/director Kenneth Branagh impersonates Marlow in this recording. Admirably, while fully playing the drama, he never goes overboard. He plays the tale for the great yarn that it is." ( AudioFile)

branagh is incredible! his performances are varied

branagh is incredible! his performances are varied and deep. a dark jewel to experience in an enrapturing confusion of time and place

This is a great novel but the reader has censored some language that would be considered offensive today. This is a great disservice to the story itself. I recommend another audio version that is more faithful.

The text is exceptionally well recited. HOWEVER, in researching this novella I came to realize a disgusting change had taken place. The word nigger has been completely scrubbed from this reading and replaced with the word black. I find this to be appalling, as it has substantially changed the tone of the narrator's commentary on black Africans. The text is now fundamentally changed. This change was no doubt well-meaning, but implies that historical reality itself is unsuitable, offensive, and so unnecessary to understanding the literature that it warrants revision. As a consequence, just to preserve an idiotic sense of comfy politeness during the reading of a novel which largely features violent European imperialism, the editors have disarmed the reality of the text and removed it from history. I am most offended in that I would have never noticed this change had I not researched it further, giving me a false impression of the author, rhe story's contents, and its place in history. I cannot stress enough how disappointed I am by this. It was such an excellent reading, otherwise.

The novella is literature's most compellingly roaming form and Conrad absolutely owns it with Heart of Darkness. I first read Conrad in high school, with throngs of other pimply kids. I liked it sure, but didn't understand all of the conflciting currents of this brilliant story. I was re-introduced to Heart of Darkness when I recognized it in Francis Ford Coppola brilliant Apocalypse Now. During the last few years I've been on a huge Conrad kick, listening or reading to Lord Jim, Victory, The Secret Agent, Nostromo, etc.

The man is simply amazing. It is incredible to think that he could write better in his 3rd language (English) than most writers could ever hope to write in their first. In this way, he shares a lot with Nabokov.

Anyway, this is one of those few works I constantly return to for its humanity and for its inspiriation. Kenneth Branagh's reading of HoD is amazing in both its depth and nuance.

God is Dead (for the first time)

I had not read any Conrad until recently, and was mildly surprised Conrad had four novels on Modern Library's Top 100 list (more than any other author). Having now completed the four Conrad novels on that list (Nostromo, Lord Jim, The Secret Agent, and The Heart of Darkness) I definitely enjoyed this version of the Heart of Darkness the most, yet I did not find any of these "must reads" except to gain, first hand, a historical perspective on modernist literature.

Conrad's writing of around 1900 is essentially modern and the earliest novels I have found in which "God is dead". This is not at all explicit, but is subtly, yet distinctly, implicit. In the 1880's Nietzsche declared "God is dead" but it took a while before novels began to explore this viewpoint. I was not expecting this outlook when I started Heart of Darkness, I was expecting a dark adventure novel. I found the writing excellent, but was surprised by the modernist outlook and style elements.

Some have considered Heart of Darkness racist, as the novel clearly objectifies native Africans. I would contend that Conrad objectifies everybody in his novels. There is racism, but it is the racism of the the society and characters, not of the author. The author seems to point out the absurdity, and mindless conformity, of racism (and many other social constructs). The novels are not about story, or about character, but instead are impressionistic interpretations of the author's nihilistic existentialist world view. The author's language is rich and powerful with exaggerated and non-linear descriptions.

Sometimes a book makes a "best" list because it is truly great, sometimes because it is very good and was a creative first. I think the latter applies to these Conrad novels.

There is a strong similarity of fundamental outlook between these four novels. I am happy to have read them all, but won't recommend them all to my daughter...I will recommend Heart of Darkness.

The narration by Branagh is wonderfully perfect and this narration makes this a really wonderful first Conrad.

From Civilization into Darkness

The enigmatic narrator Marlowe tells his dark story of madness and despair from the deck of a ship anchored in the Thames in the harbor of London, the then world's center of commerce and civilization. It ends in the heart of madness and despair, the Congo river deep in Africa. In this short novel, which has been called one of the most important works in modern literature, Marlow's voice is that of Kenneth Branagh, one of the finest of actors today. His voice gives a complete new dimension with an interpretation on a richer more meaningful level that is impossible with just the printed word.

Dark story, much to ponder

This book is so full of symbolism that I had to listen to it twice to get the most out of it. I checked out sparknotes in between listens so as to get as much as I could out of the second listen, and it was a smart move on my part. If I had been satisfied with one time through, I would have missed the whole point of the story. It is a short book, more of a novella, which might help entice me to read it again in the future. It is a great allegory and commentary on human nature. Conrad is a great writer. I think I will ponder on this story for a long time and try to determine which character I am most like at an given time. I will also use it to analyze (not judge) those around me. It is inevitable, I think. Read this book if you enjoy stories that make you think, dig deep for hidden meanings, and analyze. It will stay with you for a long time. However, keep in mind that it was written for another era and much of the structure should not be considered or evaluated according to modern standards. It is a classic and will stand up to the test of time if the reader remembers that fact. The story itself is timeless.

Branagh's performance is absolutely stunning, especially so in the 3rd & final chapter. Would highly recommend

This is where I wish we could give two scores, one for narration and one for writing.

I was assigned The Heart of Darkness in high school and despised every minute of it. In fact, I have often referenced it as my most-abhorred book.

As an adult, I wanted to give the book a second chance, and I figured if I didn't like it with Kenneth Branagh narrating it, there was no hope for reconciliation. I figured that four hours was short enough a time to devote to this experiment.

Branagh gets an A+. The narration is impeccable. If you like this story, you're in for a treat.

Unfortunately, I still can't stand the book. I didn't agree with Conrad's premise as a kid and nothing has changed in the interim.

But, that's just me. If you like this story or want to experience it for the first time, this is in the upper echelon of audiobooks.

I feel like an uneducated Philistine by saying that I have attempt to read Conrad's Heart of Darkness a number of times but have never been able to complete it. In all cases, I failed because I found Conrad's dense prose, lack of story, and philosophical musings boring. However, Sir Kenneth Branagh is able to make the story come to life in a way that that the prose and musings become interesting and worth the time digesting. I understand now why this book is considered a classic of English literature. I highly recommend this Audible book.

This was my first time reading Heart of Darkness. It was highly gripping, and Kenneth Branagh does a great job at narrating. I listened to the entire book in one sitting. There's not much more for me to add, because it is such a classic novella.

Kenneth Branagh delivers a wonderful narration of this great novel, creating the right atmosphere and bringing the characters to life.