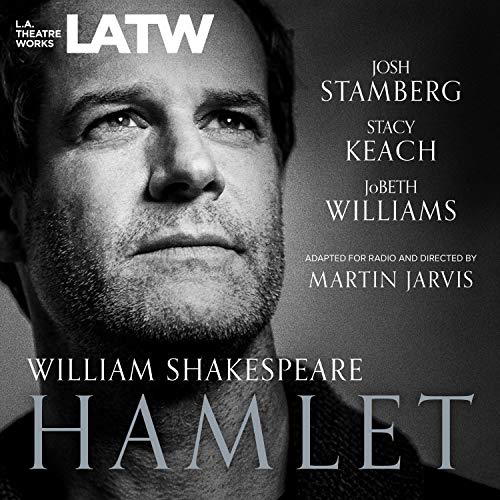 Shakespeare’s timeless story of revenge, corruption, and murder is considered one of the greatest works in the English language. Prince Hamlet sets out to avenge his beloved father's death at the hand of his uncle Claudius - but Hamlet's spiral into grief and madness will have permanent and immutable consequences for the Kingdom of Denmark. Composed over 400 years ago, Hamlet remains one of the theater’s most studied and performed works, and is presented here in a stunning, sound-rich, full-cast recording.

Recorded at The Invisible Studios, West Hollywood, in August 2011.

Lead funding is provided by the Rosenthal Family Foundation.

If you are looking for a quality presentation of Hamlet, this is it! The reading is very well done and the pace moves quickly as not to bore the reader (10th grade students). I have used the audio every year now for 5 years and have not found a better one to use with our books. There are very few lines in this audio that are not in our book and the students react very well to the readers. It is hard to make kids like Shakespeare, but at least I stand a chance with this audio version. We do stop very often to discuss the language and what is going on, but as they get used to the language we can move further each time before discussion is needed. Very well done narrators, Bravo!