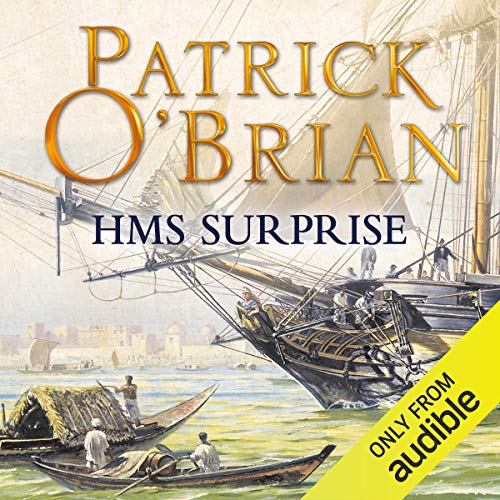 H.M.S. Surprise, the third in O'Brian's acclaimed Aubrey-Maturin series, follows the variable fortunes of Captain Jack Aubrey's career in Nelson's navy, as he attempts to hold his ground against admirals, colleagues, and the enemy, and accepts a commission to convey a British ambassador to the East Indies. The voyage leads him and his friend Stephen Maturin to the strange sights and smells of the Indian subcontinent, and through the archipelago of Spice Islands where the French have a near-overwhelming local superiority.

Rarely has a novel managed to convey more vividly the fragility of a sailing ship in a wild sea. Rarely has a historical novelist combined action and lyricism of style in the way that O'Brian does. His superb sense of place, brilliant characterisation and a vigour and joy of writing lifts O'Brian above other writers in this genre.

Would you listen to H.M.S. Surprise again? Why?

I enjoy all Patrick O'brian's stories and I am delighted that they are beginning to be recorded as audible books. I wish they'd hurry up and record all of this series.

What does Ric Jerrom bring to the story that you wouldn’t experience if you just read the book?

Ric Jerrom brings out the humour and accents of the different characters. His voice is excellent for this story.

Who was the most memorable character of H.M.S. Surprise and why?

this one has been my favorite of the series so far. my favorite part was that when jack was in India, he never disguised himself as a tiger.

Although Patrick O'Brien's The HMS Surprise (1973) begins with the British Admiralty bureaucracy deciding that the 5 million in gold that Post-Captain Jack Aubrey captured from the Spanish will revert to the crown instead of being divided up among the naval officers and sailors involved, thereby preventing Jack from getting out of debt and marrying Sophia Williams, the third entry in Patrick O'Brien's series of historical novels set in the age of sail during the Napoleonic wars focuses most on the trials, tribulations, and triumphs of Stephen Maturin. Indeed, for much of the novel Jack's odd couple bosom buddy Stephen, the taciturn polyglot ship's surgeon, naturalist, and secret agent, is in physical and or emotional distress. Throughout, he applies his keen intelligence, humane understanding, and philosophical calm to Jack, himself, and the people around them as they cruise for thousands and thousands of miles on various missions aboard the HMS Surprise, stopping at Rio, rounding the Cape of Good Hope, refitting at Calcutta, and so on. Throughout, O'Brien effectively tells his story via multiple narrative modes: third person, Stephen's journal, Jack's letters, etc. Throughout, he manages a perfect mix of naval routine and naval action, on-shore melodrama and local color, historical politics and prejudices. The novel also has plenty of humor, as when Stephen speculates to Jack on "the burden of sex," and how if he were he to castrate all the men on their ship, "they would grow fat, placid and unaggressive; this ship would no longer be a man-of-war. . . . We should circumnavigate the terraqueus world with never a harsh word.”

O'Brien is a master of vivid and lyrical description, whether of

--a Hindu festival: “an approaching line of elephants, so covered with housings, paint, howdahs and tinsel that below nothing could be seen but their feet shuffling in the dust and before nothing but their gilt, silver-banded tusks and questing trunks.”

--a surreal sea: "The whole sea was white, a vast creaming as far as eye could see. . . The whole might have been a white landscape, whose size concealed its terrifying, dreamlike speed."

--a sunrise at sea: "The blaze of light moved down to the topsails, to the courses, shone upon the snowy deck, and it was day. Suddenly the whole of the east was day: the sun lit the sky to the zenith and for a moment the night could be seen over the starboard bow, fleeting away towards America. Mars, setting a handsbreadth above the western rim, went out abruptly; the entire bowl of the sky grew brilliant and the dark sea returned to its daily blue, deep blue."

--an evening at sea: "he remained throughout the frigate's evening activities, leaning on the bowsprit and watching the cut water sheer through mile after mile of ocean, parting it with a sound like tearing silk, so that it streamed away in even curves along the Surprise's side, to join her wake, now eight thousand miles in length."

--a calm sea: “The ship was a world self-contained, swimming between two perpetually-renewed horizons. . . both past and future blur, dwindling almost into insignificance."

--a ferocious battle: "The Surprise slowed, lost her way, and lay shrouded in her own smoke right athwart the Marengo's bows, hammering her as fast as ever the guns could fire. The third broadside merged into the fourth: the firing was continuous now, and Stourton and the midshipmen ran up and down the line, pointing, heaving, translating their captain's hoarse barks into directed fire--a tempest of chain."

--an island mathematically observed: "The boat pulled through a gap in the coral reef to a strand with mangroves on the left and a palm-capped headland to the right; a strand upon which Jack had set up his instruments and where he and his officers were gazing at the pale moon, with Venus clear above her, like a band of noon-day necromancers."

Such passages give an immersive pleasure.

And the reading by Ric Jerrom increases that feeling ten-fold. I can't imagine listening to an O'Brien novel read by anyone else. Jerrom has become for me Stephen (with his slight Irish accent and philosophical wit) and Jack (with his bluff, hearty, "plenitude of being" voice), and anyone else associated with them like Sophia Williams (no simpering or nasal falsettos from Jerom for O'Brien's women, thank you!).

I suspect that O'Brien's twenty books about Jack and Stephen form a single giant composite novel. He writes The HMS Surprise so as to bring new readers up to speed on Jack and Stephen's personalities, backgrounds, careers, and relationships without boring veteran readers, and moves the overarching multi-volume story forward via plenty of new developments and locales, including some sudden suspenseful and vivid scenes of naval combat. People interested in literate, philosophical, and authentic age of sail sea stories (with plenty of Jane Austen-esque manners and melodrama) should try O'Brien's Aubrey-Maturin books, but should probably begin with the first, Master and Commander (1968) and then proceed forward if caught.