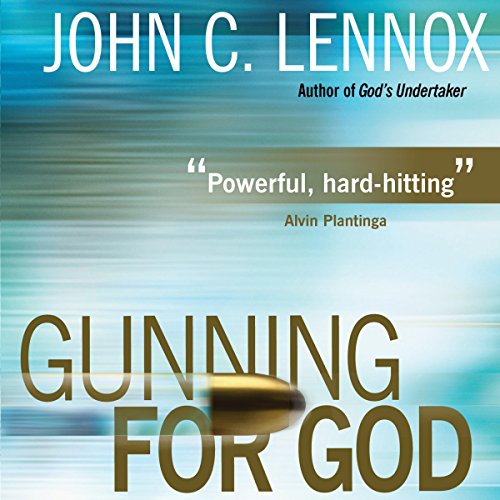 Atheism is on the march in the western world, and its enemy is God.

Religion, the "New Atheists" claim, is "dangerous", "kills", or "poisons" everything. And if religion is the problem with the world, their answer is simple: Get rid of it. But are things really so straightforward?

Tackling the likes of Richard Dawkins, Stephen Hawking, Christopher Hitchens, and Daniel Dennett head on, John Lennox highlights the fallacies in the their approach, arguing that their irrational and unscientific methodology leaves them guilty of the same obstinate foolishness of which they accuse dogmatic religious folks.

Erudite and wide-ranging, Gunning for God packs some debilitating punches. It also puts forward new ideas about the nature of God and Christianity that will give the New Atheists' best friends and worst enemies alike some stimulating food for thought.

It is unfortunate that such a good book is diminished by poor narration skills. The narrator often mispronounces words. He also reads as if he is in a confined space and is unnaturally speaking as if trying not to let people overhear his conversation. I can’t bear to listen long enough to finish the book.

love anything Lennox
man I'm struggling with this narrator.
he may work for someone else.
dry voice quality.

Disconnected by the narrator

I love Lennox and am a huge fan of his books. However, the excellent and important content of this book for me was completely ruined by the narrator. The warm, intimate and humorous personality of John Lennox is so much a part of absorbing his astounding knowledge and making it possible for even non-scientist to not be intimidated by the content. I am not saying Mr. Crockett needs to imitate John but his lack of melody, vocal inflections and general vocal tone of familiarity is like listening to someone read some other person's scientific and philosophical report.....very boring and neurologically anesthetizing.
If you can persevere with Crockett narration John's content is powerful, as always.

The book's content is excellent. It provides plenty of "ammunition" to defend against the "New Atheism", and I got a lot of it. I will be reading this book over and over again -- studying it, in fact -- in order to become adept at this "ammunition".

However, the narrator is just OK. His fluency is fine, but his tone tends to the monotonous. Also, his mispronunciation of words is frequently jarring and distracting. But don't let the narrator's follies dissuade you from this book. It's a great read, whether in print or Audible!

Great book, good performance except for annoying and frustrating pronunciation of words ending in y...

Starts dull but only gets better

This book has a great amount of references. One gets the feeling that this is the tip of an iceberg. It is a great book to learn about the different discussions surrounding the veracity of Christianity. It is a starting point to understand what sources to go to to get full understanding of each argument. It is a great summary.

Lennox is always great and this is no exception. Wonderful refutation of the new atheists as well as fantastic theological insights, rigorous analysis and beautiful gospel articulations.