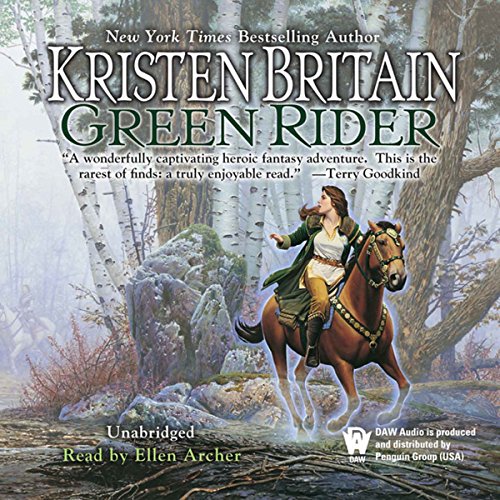 Karigan G’ladheon, running away from school, is traveling through a deep forest when a galloping horse pounds up to her, its rider impaled by two black-shafted arrows. With his dying breath, he tells her he is a Green Rider, one of the magical messengers of the King. Before he dies, he makes Karigan swear to deliver the message he’s carrying, and gives her his green coat, with the symbolic brooch of his office.

Pursued by unknown assassins, following a path only her horse seems to know, Karigan becomes a legendary Green Rider—for when given to the right person, a Rider’s brooch awakens the magic inside.

What a fantastic discovery!

I had not heard of this author or this series before but my wife found the paperback in a used book store. And boy am I glad!

The writing keeps you engaged and the story keep you anticipating. The dialogue is natural and advances the story. In short, it's everything I can ask for in a novel.

Ellen Archer is a great performer! She portrays each character well and you never wonder which one is talking. Her portrayal of the male characters works and they do not sound like adolescent boys (a problem with some female readers.)

The true test: I already bought the next book in the series and I can't wait to read it.

So, overall I really enjoyed listening to this, much more than I expected. It seems that the concept of the Green Rider was taken from the pages of Mercedes Lackey's Heralds of Valdemar series, except it presents a much more realistic presentation of the position, social relationships, and politics (it also helps that Britain is a better writer).

Yes, it's probably a fantasy written to appeal to those just getting into the genre, but there's nothing wrong with that. I appreciated that the main character was more in depth and rounded than the angsty teen runaway I was expecting. She was a strong, convincing female character without overdoing it.

While I somewhat agree with some above comments that it never felt like our leading lady was any 'real' danger, she does have an extensive adventure and I enjoyed it from beginning to end. Some things could have been better; the pacing was occasionally jumpy, and it felt like there were 3-4 climaxes which *almost* made the story too long, but I'm just nitpicking here.

This series is quite frustrating to me, I'm not usually the type to write scathing reviews unfortunately I think this series deserves one. I listen to audio books and I'm writing this review after listening to the first four books along with part of the fifth book. Right now I'm in the process of returning all of the books in this series.

Where should I start, the way these books are written at least half of each book if not more is a complete waste of time. Each book tends to move along nicely until it comes to a grinding halt for character development and relationship building. However these sequences leave me thinking so you've added another pointless character to make the book longer.

The main protagonist almost seems to be developing her character, but don't get your hopes it pretty well ends there. As the series moves on I find myself holding out hope for some kind of development any kind of development only to be disappointed.

Another sticking point for me is how names are pronounced. What I'm referring to is how after approximately 70 hours in audiobook terms the narrator starts pronouncing this name differently after is has been prominent throughout the whole series.

I hope this review is helpful. I wish I would have seen a review to steer me away from this series.

Medieval epic fantasy told in 3rd person POV, mainly from the perspective of the heroine, but also from a villain's POV. A solid story. Entertaining but not outstanding. Excellent narration, though! Superb performance by Archer. Family safe, too. No sex or swearing. There is a map on the Web, but it's blurry.

There is a plot to overthrow the king of Sacoridia. On her canny horse, Karigan must ride like the wild hunt to deliver a message to the beleaguered king, but first she has to deal with deadly creatures of black magic and relentless sword-masters. Thankfully, she's been given a few magical artifacts and (some) special training to help her overcome several realistically grim and painful attacks.

Characterization is okay. Karigan, a young woman in her first year at university, was a reluctant but dutiful heroine. I liked her well enough, despite some whining (with cause) and some carping about snobbish aristocrats. I grew tired of her denial: “I’m NOT a Green Rider!" Hopefully, that inner-struggle won't continue for long in book 2.

Karigan as heroine wasn't quite a Mary Sue. She suffered. Was captured. Nearly gave up. But too often, she alone won the battles, because she journeyed alone — with some good exceptions. Her learning curve was steep, but Audible authors John Flanagan (Ranger's Apprentice), Jim Butcher (Codex Alera) and Brian Fuller (Trismoon) do a better job portraying a developing skill set. Having said that, I liked how Karigan learned to wield a sword, with help from an unexpected source (but success occurred too quickly).

Good secondary characters. I liked her visit with the Berry sisters, Bay and Bunch, and with the gigantic forester, Abram. Jendara the female sword-master mercenary was quite interesting, as was another woman: Laren Mapstone the battle-scarred captain of the Green Rider organization. Then there's King Zachary, young, betrayed, but brave and wise. Also the ghosts, with arrows in their backs. I felt for them, including F'ryan, the Green Rider who charged Karigan to complete his delivery, just before he died. The villain Merwell was also interesting, and textured. The other villain (Gray One) was just a cardboard figure. No idea what motivated him to be so evil.

It bugged me that the Green Riders received minimal respect, even from the king's own guards. I compare this with the solid respect the King's Rangers (similar to Green Riders) receive in Flanagan's series, beginning with The Ruins of Gorlan.

I see that the sequels are quite long, ranging from about 650-900 pages. Not sure if I'm invested in the characters or the plot enough. Long books tend to annoy me — flaws acceptable in shorter books begin to stand out. Often times, lengthy books meander and contain filler. They frequently suffer from excessive internal dialogue, too, and irritating reiterations of events covered in the previous books (as if readers forget). But I might give it a go.

Great Adventure From Begining to End

This story was a great adventure. The narrator was excellent and made all the voices unique and very easy to follow along with. Strong female protagonist, a lot of action, a good mix of magic, great cast of characters. If you liked The Hunger Games, Green, and The Percy Jackson Series then you will definitely enjoy this series. Suitable for mid teens and older for violence and suggestive content.

Would you consider the audio edition of Green Rider to be better than the print version?

i'm not sure why a book in print or audio would be different. the content should be the same.

however, when reading the book, the charactors had a different voice to me. listening to it, most seem to be scot. it took a bit of getting use to.

What was one of the most memorable moments of Green Rider?

the berry sister's library.
the fight with the merc & weapons.
the wild ride & the throne room scene.
the whole ending, from the picnic with alton.

i started out by reading the book. i began reading it to my husband, who is disabled and finds it hard to read now. once he realized he liked it he asked for an audio copy so he could listen to it while i was at work. pretty soon the whole family was listening & trying not to give spoilers to those that had not got to certain parts. it became fun to talk about it and work out story points when together.

The narrators voice sounded like siri from my I phone, and after struggling through 3 hours of a immature, boring story, I just had to stop.

Exciting adventure story for all ages

This is a fun, well written book for adults and young people. It's not geared to children at all but there is no language to overlook and no sex. Now if that sounds a bit boring, don't let it turn you off, because Kristen Britain is a wonderful story teller and Ellen Archer is a fabulous narrator. She does multiple voices, each very different, well acted. This is a first book that has lots of room to grow in the future. The concept of the Green Riders is new and it mixes women and men together so it can be enjoyed by both. It has lots of intrigue, fast paced adventure, and fantasy. I am so glad there are 4 more books to look forward to!

Better than reading it

Where does Green Rider rank among all the audiobooks you’ve listened to so far?

One of the best books that we have listened to so far.

I purchased this book to see if my husband (who is blind) would like to listen to the series and he enjoyed it so much that we got the other three.

I loved this story. It was an absolute delight. We have a heroine in a world where men and women are equal, so there's none of that "I'm not like other girls" trope that everybody hates. There's no chosen one either. By happenstance, it seems, young Karigan is presented with a choice. By taking it, she is thrust into a perilous journey, full of magic, adventure and high stakes. The story is action filled and fast paced, but not in a thriller, page-turning, can't put the book down type of way. It kept my interest going and it didn't take me long to finish it. I loved how there was no info-dumping, but the providing pieces of world-building on the way. The characters where well developed and I really connected with the main character.

The only thing I coult fault the book for was changing the viewpoints (which character the story is being told through) between scenes within a chapter (not within a scene, fortunately, or I would have been utterly confused). The book marks new scenes with a horse symbol, but the distinction is less clear in the audiobook version, where it becomes confusing at times. The narrator was still good. I have both a physical copy and an audiobook and I used both, although 75% I read myself in my paperback copy.

Anyway, I loved the beginning, middle and the end. I loved the twists and turns (which I rarely saw coming). I loved how Karigan isn't just super good at everything right away. She really has to work at it. And I loved the Bunchberry sisters. The visit with them reminded me of the hobbit's encounter with Tom Bombadil in The Fellowship of the Ring by J.R.R. Tolkien. This is by no means a Tolkien retelling, but I do think that if you like that type of fantasy, you will probably like this book too.

I am so pleased with it, that I already ordered the next book in the series and I can hardly wait to start.

I've been in love with this series for about 15 years and patiently await each new book. When I was bored I decided to listen to the whole series here and it rekindled my admiration for this series.
It is at times a bit kitschy but I love it.