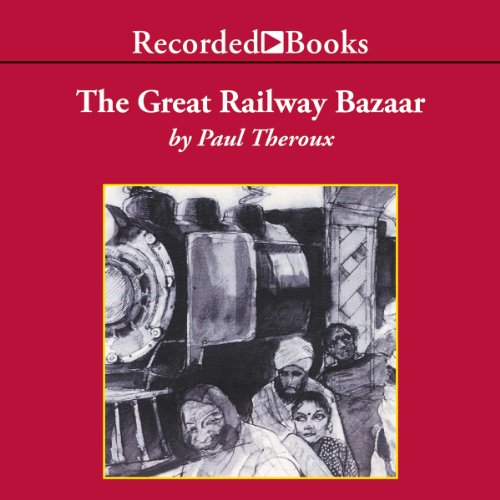 In 1973 the novelist Paul Theroux made a decision that dramatically altered his career and changed a genre. He would travel Asia by train (from London to Japan and back), write copious notes, and, on his return home to London, write a book about the experience. Published in 1975, The Great Railway Bazaar achieved a popular and critical success rare in publishing. The book became a classic of travel writing and created a model for the genre that today remains vibrantly alive. (The very interesting back story of this seminal work is relayed by Theroux in his 2008 book Ghost Train to the Eastern Star.)

The Great Railway Bazaar is Theroux on steel wheels. He wasn't doing the gig for the travel industry. He was being his expansive, audacious self. To the benefit of audiobook listeners, Theroux fans, and literature itself, Recorded Books hired Frank Muller to narrate Bazaar. Muller's narration enhances Theroux's accomplishment and expands the book's reach, as the Shakespearean stage actor sounds as good here as he did narrating great works of fiction in his prime: there simply was no one better.

Chapter one begins: "Ever since childhood, when I lived within earshot of the Boston and Maine, I have seldom heard a train go by and not wished I was on it. Those whistles sing bewitchment: railways are irresistible bazaars." Muller, with these first sentences, displays his mastery of phrasing and timing; his subtleties of intonation; his coloring and fluent shifts of emphasis and stress. Throughout The Great Railway Bazaar he displays the incomparable quickness and assurance with which these exceptional narrative qualities develop and transform at every turn of phrase, change of scene, and development of plot. This astonishing ability is Frank Muller's modus operandi, making him one of the greatest and most popular audiobook narrators of all time.

Sadly, in November 2001, Frank Muller suffered debilitating injuries in a motorcycle accident. He died of these injuries in June 2008. David Chasey

First published more than 30 years ago, Paul Theroux's strange, unique, and hugely entertaining railway odyssey has become a modern classic of travel literature. Here Theroux recounts his early adventures on an unusual grand continental tour. Asia's fabled trains - the Orient Express, the Khyber Pass Local, the Frontier Mail, the Golden Arrow to Kuala Lumpur, the Mandalay Express, the Trans-Siberian Express -- are the stars of a journey that takes him on a loop eastbound from London's Victoria Station to Tokyo Central, then back from Japan on the Trans-Siberian. Brimming with Theroux's signature humor and wry observations, this engrossing chronicle is essential reading for both the ardent adventurer and the armchair traveler.
©2007 Paul Theroux (P)2008 Recorded Books, LLC

Viewing the World from a Railway Carriage

I have never read a Paul Theroux travel book before. And this first encounter proved to be most entertaining! The author takes us on a remarkable journey from London, quickly through Europe and then at a much more leisurely pace through a wonderful Asian experience - many countries, many sights, many sounds....and many unforgettable characters. Theroux's descriptions of the trains he travelled, the visual images he conjures up in the mind of the reader and the verbal exchanges with locals are truly delightful and mesmerizing. Each chapter is a listening joy.

One highlight included Theroux's fascinating descriptions of a Vietnam in its last stages of a long and bloody war, complete with vivid descriptions some beautiful countryside contrasted with a people exhausted from battle and struggling to survive. Another memorable read was Chapter 7's most humorous depiction of Lahore, Pakistan - here Theroux demonstrates an almost perfect sense of timing in his storytelling - just like the very best comedians!

This is classy writing. Funny, witty and packed with emotional impact as the author interacts with every new stranger he meets. But, just as importantly, the narrator - Frank Muller - is absolutely superb! Reproducing with seeming ease the many local accents in the dialogue, Muller brings to life the stories in this wonderful book.

Yes, this was my first Paul Theroux book. But it won't be my last.

Another gift from Frank Muller to us

This is the only Paul Theroux book I have listened to, but when Frank Muller is reading, I am listening enthusiastically. My only complaint is that I believe the producers were hurrying him. The trip itself is full of surprises, and is the best in armchair travel that I have come upon in years. Frank can make me listen to almost anything, but this book did not come as a surprise. Mr. Theroux is delightfully observant and human, and his voice carries us through several continents without losing interest.

love this author. some of the best audiobook narration I've ever heard. check out Dark Star Safari by Paul. my favorite of his work

Oh I had forgotten just how wonderful this book is, with its quirky mix of candid observations of both people and places. I went to Iran about 5 years before Theroux and experienced the hippie trail not from the inside but as a student of architecture. This book is bound up in that time and place.
Frank Muller (the narrator) is as great as ever, keeping it fast paced and ascerbic.

The story starts out very good with lots of details but about halfway through the author speeds up and the story goes south. Author writes well and I could see and experience the places.

What made the experience of listening to Great Railway Bazaar the most enjoyable?

I really enjoyed the way the reader read this book

What other book might you compare Great Railway Bazaar to and why?

I can never be to close to that Iron rail.

This book inspired me to read more Theroux.

Yes, this book is splendid. It is the armchair traveler's erudite companion and the nostalgic traveler's remembrance of an Asia that exists no more. It is the book every contemporary blogger and travel writer aspires to write.

My one complaint is this: The reader clearly made not even the slightest attempt at proper Turkish pronunciation and thus mangled nearly every place name in the first quarter of the book. Did the reader and the editors feel confident that Turkish is such a remote and exotic language that no one would notice? If so, they exhibit a sort of provincialism and intellectual laziness that Paul Theroux would most certainly spit upon. It would have required minimal effort to do the job properly.

Great descriptions of the people and places Mr. Theroux visited on his Great Railway Bazaar. I could almost smell the foods and drink along the way. I only wish I had kept a map on hand to trace his stops. My only negative comment was that we could have spent less time in India....

Thirty-five years ago when it was written Theroux's Asian journey must have seemed particularly exotic. It's much less so now--Indians are no longer just dirty and corrupt, the Japanese are no longer so inscrutable. Theroux is refreshingly open about some of his cranky reactions to what he encounters, and no characters come in for harsher treatment than the boorish Americans he finds. With a little break I'll crack the followup book in which he retraces his steps.
Special kudos to the narrator Frank Muller: great accents, great timing!